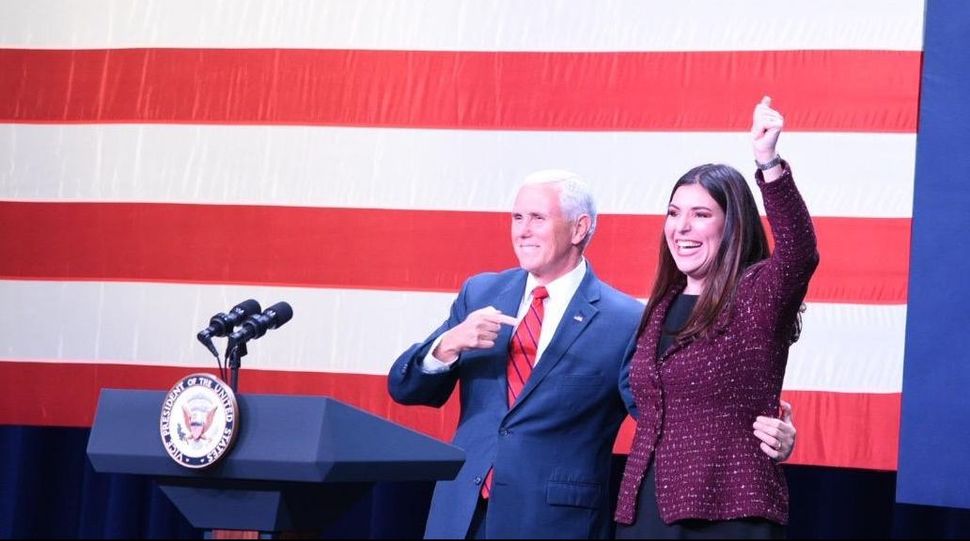 What was Lena Epstein thinking?

The Jewish Republican congressional candidate was already taking on political water by embracing President Trump, even as his popularity plunges in her suburban Detroit swing district.

Then the onetime GOP rising star invited a Messianic Jewish “rabbi” to pray for the victims of the Pittsburgh synagogue massacre during a heavily publicized rally with Vice President Mike Pence — a move that has drawn heavy criticism in the emotional days after the bloodbath.

“I could see nothing more offensive or more poorly calculated than to make this decision,” said David Kurzmann, executive director of the Jewish Community Relations Council/AJC, a local Jewish advocacy group in Detroit. “The reaction and the rage in the community right now is very significant.”

“This was offensive to Jews,” said Hannan Lis, a member of the Detroit Jewish community who is active in local Democratic politics, and who has offered informal advice to Epstein. “Even people who were Republicans, who would have supported her, were maybe a little turned off.”

Members of her local Detroit-area Jewish community asked her to apologize for inviting the so-called rabbi, whom most mainstream Jews do not consider to be Jewish.

Epstein refused. Instead, she strongly defended inviting the “rabbi” to the event, saying it is “nothing short of religious intolerance” to reject him.

“This was an effort at unity, yet some are trying to create needless division to suit their political goals,” she said in a statement.

We take no joy in having to do this. This open letter to our beloved Detroit Jewish community will run as an ad in this week’s Detroit Jewish News, urging a vote for any candidate besides Lena Epstein for US Congress.https://t.co/rQjRvVhNR3 pic.twitter.com/ZipvLw1Igj

Epstein is a staunchly right-wing Republican who made her name in GOP circles for running Trump’s successful 2016 campaign in Michigan, a victory which helped seal his surprise victory. She is running to replace retiring Rep. David Trott in a swing district that runs from suburbs of Detroit west into the conservative hinterland of the state.

Unlike other Republicans in moderate areas, Epstein has deliberately stayed close to Trump, and actively courted conservative Christians and other elements of the president’s right-wing base.

Messianic Judaism is closely linked to Evangelical Christianity. It is widely disdained by American Jews, who see it as a ploy to win Jewish converts to Christianity. At the rally just two days after the worst-ever anti-Semitic attack in U.S. history, and before any of the victims had been buried, Jacobs was the only spiritual leader invited to pray for the dead.

Vice President Mike Pence, who is an Evangelical Christian, introduced Jacobs as a “leader in the Jewish community.”

Wearing a Jewish prayer shawl, Jacobs said that “Yeshua,” or Jesus, was his “lord and savior.” Jacobs was expelled from one Messianic Jewish organization over a decade ago, and now leads his own Messianic congregation.

“Having one religious leader who calls himself a rabbi but invokes the name of Jesus, and gave a very politically charged invocation endorsing candidates, was inappropriate and offensive,” said Rabbi Jason Miller, a rabbi based in metropolitan Detroit.

The decision to invite Jacobs is even harder to understand because Epstein is a leading member of the Detroit-area Jewish community, which has 70,000 members and supports a handful of synagogues and Jewish institutions. It’s hard to believe Epstein that would be unaware of how controversial it would be to invite a Messianic “rabbi” to pray for the Pittsburgh victims.

The scion of a wealthy Jewish oil family, Epstein is a member of a Reform synagogue in Bloomfield Hills, Michigan, and has served on the boards of her synagogue, the local Jewish community center and the local Jewish newspaper. Her family’s foundation has made grants to local synagogues and other Jewish charities.

“I feel bad for Lena,” Lis said. “I like Lena. She’s a good person. I know her sister. I know her parents.”

Jacob’s prayer at the Epstein rally drew immediate national attention, largely due to Pence’s presence. In a statement that night, as discontent over the prayer spread, Epstein took credit for inviting Jacobs. “I invited the prayer because we must unite as a nation — while embracing our religious differences — in light of Pittsburgh,” Epstein wrote on Twitter.

Lis said that, in a private conversation with Epstein, she had told him that she hadn’t realized that Jacobs was a Messianic rabbi, and that she planned to apologize. That never happened.

“I haven’t seen an apology; if anything, she doubled down,” Lis said. “She’s handled it in the worst possible way.”

Kurzmann said that he and others in the Jewish community had contacted Epstein after the rally to advise her to apologize. He said he didn’t hear back from her.

“She clearly has made a choice,” Kurzmann said.