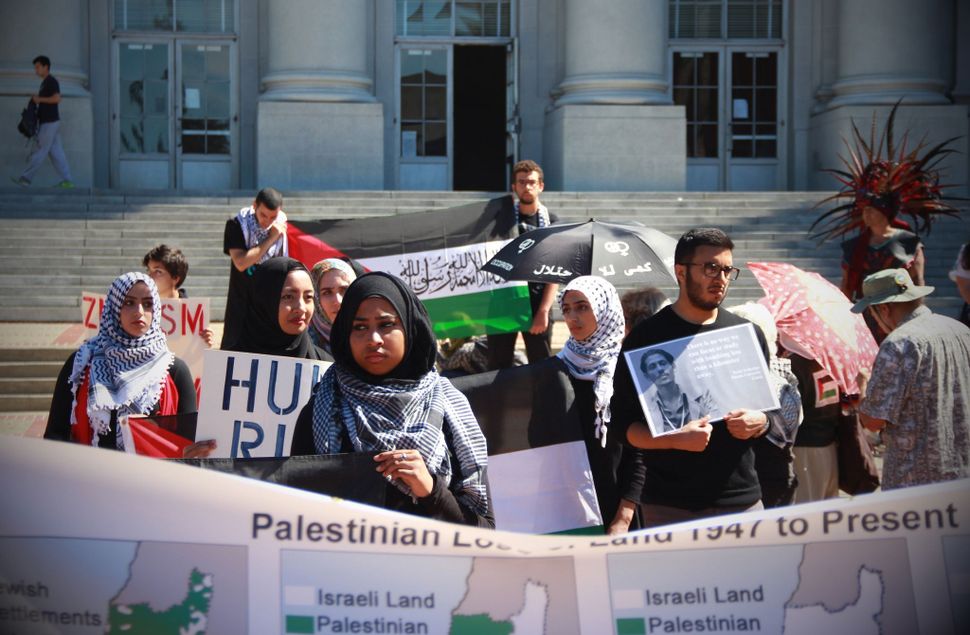 Students for Justice in Palestine at the University of California, Berkeley Image by Ariel Hayat/flickr

Students for Justice in Palestine, the biggest pro-Palestinian student movement in the country, is holding its annual conference this weekend. It will convene from November 16-18 on the campus of the University of California, Los Angeles — which has one of the largest Jewish student populations in the country. Predictably, controversy has ensued.

National Jewish organizations, UCLA students and alumni, and even the entire Los Angeles City Council have condemned the event. Nearly 35,000 people have signed a petition calling on UCLA’s administration to cancel it — the petition is titled “HELP PREVENT THE NEXT PITTSBURGH- TELL UCLA TO CANCEL SJP’S ANNUAL HATE CONFERENCE!”

But this has not deterred SJP students from traveling to L.A. from all over the country, creating crowdfunding campaigns to make sure they can make it.

“There are so many amazing workshops happening,” Raphael Dreyfuss, a senior at Oberlin College and a member of SJP and Jewish Voice for Peace, told the Forward. “I’m really interested in meeting and talking to people from other campuses.”

Around 500 people are registered for the conference, according to Ayesha Khan of National SJP. It’s “the biggest we’ve ever had despite the repression. Students are eager to attend and that’s really heartening to see,” she told the Forward via email.

Caught in the middle have been UCLA chancellor Gene Block and student government president Claire Fieldman, both of whom are Jewish and have said they are proud of their university’s numerous connections to Israel and oppose some or all of SJP’s work, but have defended the conference on free speech grounds.

“Do I support UCLA SJP’s right to host this conference? Yes,” Fieldman, who identifies as a Zionist, emailed the UCLA student newspaper after the student council had unanimously voted to affirm its support for the conference she wrote to them. “Do I endorse its content and its implications for fellow members of the Jewish and pro-Israel communities on campus and off? No.”

UCLA spokesman Ricardo Vazquez told the Forward that the UCLA chapter of SJP, one of more than 1,200 recognized school clubs, was able to book the conference facilities at no cost, as all other clubs can do. However, SJP decided to decline funding from UCLA student fees, which could otherwise be used to defray expenses such as sound equipment or food, in order to give themselves the right to refuse entry to certain students or community members.

Registration is limited to students who have been vouched for by other SJP members — perhaps to avoid what happened last year when many audio recordings of the conference, held at the University of Houston, were posted on a website called SJPLeaks.

SJP has been condemned by many Jewish organizations for promoting the boycott, divestment and sanctions movement against Israel, which they consider anti-Semitic for its sole focus on the Jewish state and for many of its adherents’ support for a one-state solution. But the community is not unanimous, and SJP does have support among a growing number of Jews. Dreyfuss said that he has never felt uncomfortable in SJP as a Jew, and that many members of his Oberlin chapter were themselves Jewish.

“Speaking up for the rights of Palestinians has strong support within Jewish tradition,” the JVP Rabbinical Council wrote last week in response to efforts to cancel the conference. “The Torah teaches the importance of pursuing peace, working for fairness, and protecting the rights of all people.”

Khan said there are about 250 SJP chapters around the country; each chapter is autonomously run, while National SJP is a volunteer network that mostly exists to run the conference. Many SJP chapters’ activities are typical of campus cultural affinity groups: Recent programs run by SJP at the University of Minnesota, for example, include Palestinian folk dancing lessons and trivia contests. They also work on campaigns of joint concern with other progressive campus groups.

But SJP is also devoted to pursuing BDS at schools like Minnesota, where it succeeded in passing a referendum this spring urging the administration to divest from companies that it claimed violate Palestinian human rights through their work in Israel and the West Bank.

Although no university has ever actually followed through and divested from Israel or companies that do business there, many Jewish students are still perturbed by BDS, claiming the campaigns are discriminatory and engender anti-Semitism on campus.

Indeed, some SJP leaders have been caught saying threatening or explicitly anti-Semitic statements. For example, SJP co-founder Hatem Bazian, a University of California, Berkeley professor who spoke at last year’s national conference, was admonished by his school administration last November for sharing an anti-Semitic meme of an Orthodox Jew. An SJP leader at Stanford University wrote on Facebook in July, “I’m gonna physically fight Zionists on campus next year if someone comes at me with their ‘Israel is a democracy’ bullsh*t.” And the SJP at Vassar College apologized in 2014 for tweeting images of Nazi propaganda from the 1940s.

SJP “is a terror-supporting, anti-Semitic network that harasses and intimidates Israel-friendly students and operates with autonomy and impunity at scores of colleges and universities across the United States,” Dan Diker of the Jerusalem Center for Public Affairs wrote in a report about the group published earlier this year.

But JVP’s campus coordinator, Maya Edery, told the Forward in an email that while anti-Semitism can show up in the movement, the main instigators of anti-Semitism include “the enabling environment created by the Trump regime and the many emboldened white supremacist fascist groups.” Broadly describing SJP as anti-Semitic, she said, is “a false and damaging characterization, which comes from an intentional smear campaign by right-wing organizations that seek to silence students fighting for justice in Palestine.”

The theme of this year’s conference is “Radical Hope: Resistance in the Face of Adversity.” The agenda for this year’s conference is not publicly available, but the website promises training in “coalition building, responsible media and press engagement, fundraising, retaining institutional memory, security culture, combating normalization, and defending our legal rights as student activists.” It also describes Zionism as “ethnic cleansing, destruction, mass expulsion, apartheid, and death.” Edery will be there running a workshop on anti-Semitism.

The presentation will cover “a historical overview of antisemitism, a critical look at Ashkenazic dominance, an investigation into how antisemitism operates today, and the ways in which we can all play crucial roles in combating antisemitism,” Edery, who is Jewish, told the Forward in an email. “We will talk about how antisemitism intersects with numerous systems of oppression and upholds white supremacy, and why our movements for collective liberation must commit to dismantling and challenging antisemitism.”

Last year’s itinerary, as revealed by SJPLeaks, included breakout sessions like “BDS 101” and “Coalition Building.” One session encouraged people to be wary of Jewish-Muslim interfaith dialogues because such meetings could distract from Palestinian advocacy. Another SJPLeaks recording purports to show a speaker appearing to endorse violence as an acceptable tactic. “One of the issues with non-violence is that… it becomes, in the post-Oslo era, an end goal rather than one strategy,” the speaker said. “No one is saying that we can’t use non-violent strategies as forms of resistance, but to make it this totalizing discourse that [a previous speaker] described deprives us of a lot of possibilities.”

It’s statements like these that motivated the L.A. City Council to vote unanimously to call on UCLA to cancel the conference. “The Regents of the University of California should let UCLA know that it is not appropriate for SJP to have a meeting on campus, especially where many of the leaders of the organization are calling for violence against Jews,” the resolution stated. “It is never a good time to have this type of event, but given the atmosphere in the country, including the recent shooting at a Pittsburgh synagogue and arson at synagogues in New York, it is inappropriate for UCLA to host such a conference.”

But Block, the school chancellor, responded in a Los Angeles Times op-ed that although he had “fundamental disagreements with SJP,” he had no choice but to allow the conference — and even said that some good may come of it.

“Ultimately, we must combat speech that is distasteful with more and better speech,” Block wrote. “If universities can find ways to rise above the current rancor and if our students in particular can model our values, then that may well provide the very best hope for our future.”

Dreyfuss, a Los Angeles native, said it was “pretty upsetting” that his city council tried to shut down the event, especially since he thinks SJP’s leadership “takes anti-Semitism very seriously as something that needs to be combatted.”

But despite his frustration, he said he was still looking forward to the weekend.

“With college activism, there’s unbelievable turnover,” he said. “Students come in, become politicized, and suddenly they’re out [because they graduated]. Conferences are important to do intergenerational training. I’m excited to pass on what I’ve learned in our time, and go back to make our campus organizing more effective.”