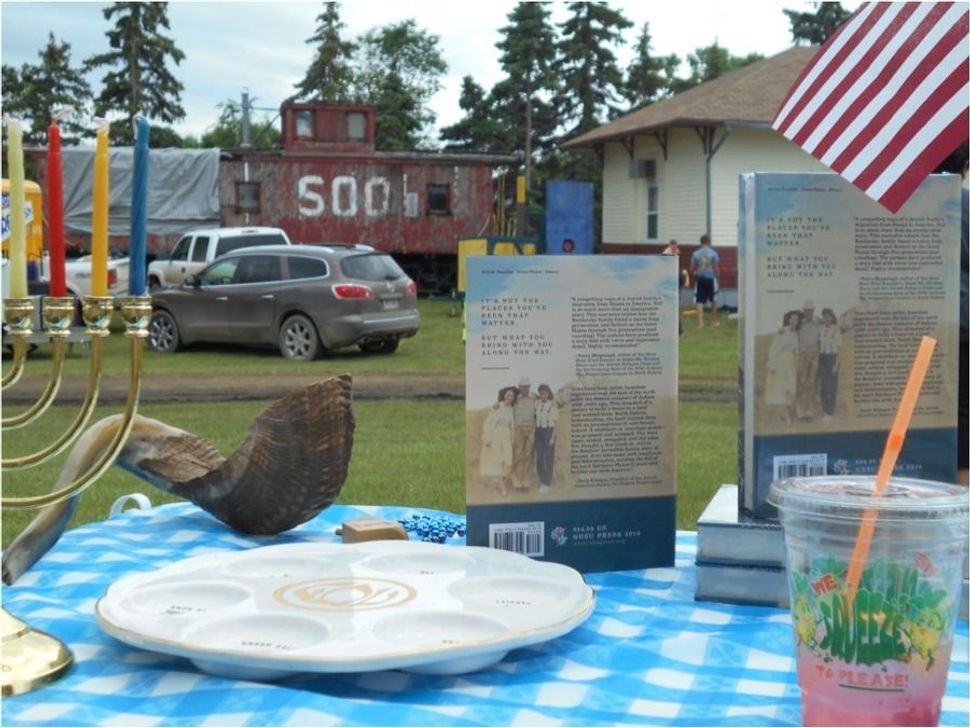 This story began in 1858 with the birth of my great-grandfather in a Russian shtetl. But the most recent chapter began six years ago at the Ashley Jewish Homesteaders Cemetery in Ashley, North Dakota.

My great-grandfather, a Russian-Jewish immigrant turned first-time farmer on the Dakota plains, is buried there, along with other members of the largest Jewish farming community ever in the Dakotas or Montana. My son Lincoln, who was visiting the site with me, started asking questions about the Jewish settlement that formed around 1905. I didn’t have many answers.

Fast forward two years to 2015, exactly fifty years after my late dad first held hands with me and my sister Nancy and walked with us down the little hill to show us that sacred place. I was in Bismarck, making a presentation to the North Dakota State Historic Preservation Review Board. After researching in dusty archives in three states and scrolling down microfiche newspapers until my eyes were blurry, I had drafted an over 100-page nomination proposal. The Board voted unanimously to recommend the property’s listing on the National Register of Historic Places. After the Department of the Interior named the property to the Register, the Ashley Jewish Cemetery Board (made up of three great-grandchildren — including me — of homesteaders buried in the cemetery) voted unanimously to place something new on the property to further honor these courageous pioneers.

Contributions came in from descendants of those buried at the cemetery and from others with no apparent connection, along with a matching donation from the Jewish American Society for Historic Preservation. We opted for having two boulders (literally and figuratively representing the challenges the Jewish farmers faced) with explanatory plaques.

A re-dedication of the burial site was held in May 2017, with over 100 people attending from seven states. It was followed by buttermilk kugel with sour cream, salmon salad, and cinnamon babka at a reception in a 99-year-old converted barn nearby, with tables decorated with blue prairie flowers, kosher chocolates, and American flags.

But then the guests left, and something felt undone.

Maybe it was the fact that I had learned in my research of two Dakota residents who had started to write books on the state’s Jews but weren’t given the gift of time to complete them. Maybe it was seeing my dad’s unpublished book, with its thin cardboard cover, starting to sadly bow on my shelf. Maybe it was a newspaper reporter who inquired if I was “still Jewish.”

A force came over me stronger than the prairie wind, and I started compiling and writing. I added my “new” research to the recollections of my late dad, and I sent my great-grandparents’ Yiddish letters to a translator. A manuscript began to take shape — a story of five generations and 150 years of faith, gratitude, determination, community, and hope.

The biography/memoir, “Still,” was released in March. In between work obligations, I began doing readings. I spoke everywhere from South Dakota’s Historical Society in Pierre on the eve of a blizzard, to Fort Snelling, Minnesota, on the 75th anniversary of the D-Day invasion (in which my dad participated), to Pat Tillman Middle School in Phoenix, where I was working as a special-ed teacher’s aide while my son recovered from hip surgeries. I faced numerous people who had never met a Jew, or if they had, hadn’t felt comfortable enough to ask questions of him or her. But I specifically gave them permission.

Suddenly, without warning, something amazing and unexpected happened. I was no longer only preserving the memories of my ancestors with my research. I was highlighting similarities between people of faith, while also knocking down commonly held stereotypes regarding Jews:

“Jews haven’t served much in their countries’ military, have they?” — In World War II, 550,000 Jews served in the armed forces of the United States, a higher percentage than the general population. And by the way, my dad was the first volunteer from his county.

“Jews never wanted to farm and weren’t good farmers, were they?” — Some European Jews didn’t farm because they were not allowed to own land. Though the Jews who farmed near Ashley only arrived in America once the best land had been taken, most were successful enough in the rock-filled hills of what their neighbors called “Judenberg” to purchase their land outright after two to three years, instead of waiting the full five years to get a land title under the terms of the Homestead Act.

“Jews tended to stick to themselves in their communities, right?” – My book is filled with the kindnesses back and forth between the Jews and their German-Russian neighbors in the “Sauerkraut Triangle.” Even today, there are a number of Sarahs still walking around who were named after my great grandaunt, who was proficient in Russian, English, German, and Yiddish, and kindly translated for the doctors while her neighbors were giving birth.

A few Sundays ago, I was sitting at a folding table at the Sizzlin’ Summer Days festival in Ashley, across from the Future Farmers of America dunk tank and kitty-corner from the cheese curd truck, while nursing a pink lemonade. Besides copies of “Still” stacked on my table, I displayed a Chanukah menorah with multicolored candles, a Passover Seder plate, a shofar, my dad’s Second Infantry Division plastic mug with flag, and my son’s beautiful Kiddush cup.

Then a couple approached. They saw the picture of my great-grandfather’s monument at the Ashley Jewish Cemetery on the cover of the book, and the gentleman said to me, “Oh, I know who you are. You are the Jewish plaque lady. You know, I’ve gone down 48th Avenue my whole life, and never knew anything about the Jews who used to live here. We’ve even taken some of my wife’s family down there to look at those boulders. Now we know.”

As they headed to the big striped tent to hear a singing performance from a group called “The Preachers’ Daughters,” four young men in white shirts with thin ties approached me. They were from the Church of Jesus Christ of Latter-day Saints. One of them was specifically interested in the Kiddush cup on my table, a gift from my son’s Torah reading teacher for his bar mitzvah. A tree’s branches gracefully climb up the side of the cup, sculpted in metal. I told him that the unique design was based upon a quote from Proverbs, “It is a tree of life to them that hold fast to it, and all that uphold it are happy.” The young Mormon man took out a notebook and jotted the phrase down. “May God be with you,” he said, smiling. “He’s with all of us,” I responded, as they walked away.

A lady came past and asked me if I could hear The Preachers’ Daughters from where I was sitting. “Their harmony on Amazing Grace is beautiful,” I said. The lady smiled.

Rebecca Bender and her father Kenneth Bender are the authors of “Still” (NDSU Press 2019), the 2019 winner of the Independent Press Award (Judaism category).