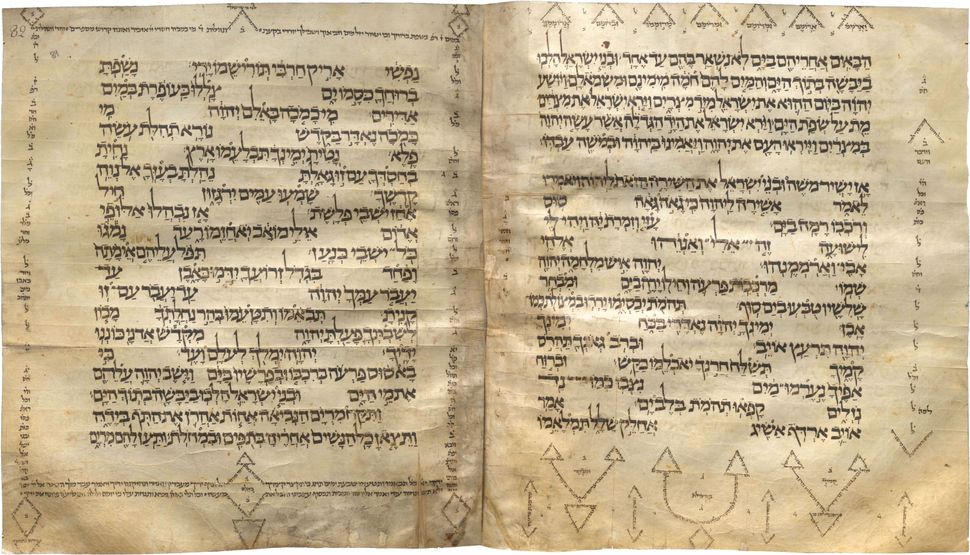 A bible from the Museum of the Bible

The 1,000-year-old Hebrew Bible that went on public view for the first time last week would not exist at all, or have survived this long, without the obsessive efforts of two obscure Jewish groups: the Masoretes and the Karaites.

The Masoretes were a mysterious group of scholar-scribes, who starting in the Sixth Century worked to create a complete, accurate text of the Five Books of Moses. The Karaites, who emerged a bit later, are a Jewish religious movement that derives its laws and customs solely from those five books, rejecting the legal authority of the rabbis who shaped the tradition after the Roman destruction of the Second Temple in 70 C.E.

“These two groups were focused on the text,” said Herschel Hepler, a curator at the Museum of the Bible in Washington, D.C. “Their efforts turned the text into a huge, heavy sacred object, and as a result, the text got preserved.”

The Bible that just went on display is one of a dozen roughly complete Hebrew manuscripts that are this old and contain the full Torah, and only one of two in the Americas. The other, located at the University of Michigan, is so fragile only scholars have access to it.

This Bible, formerly called “MS 3” and now known as the Washington Pentateuch, was originally written around the year 1000, probably in the town of Tiberias in what is now modern Israel. About 20 pages written in 1141 were added later, although experts aren’t sure when. It was in the in the Middle East until around the 1400s and 1500s, when it was bound in a style that’s typical of that region. Somewhere between the binding and 1835, it was moved to Ukraine and then about fifty years later to Russia. After that, it passed through the hands of various collectors until it ended up in the private collection of an Israeli who lives in London.

The Green family, evangelical Christians who own the Hobby Lobby chain of craft stores and founded the Museum of the Bible, purchased the manuscript from that collector. The sale price has not been made public, Hepler said.

It is thanks to the Washington Pentateuch and the 11 other manuscripts like it that scholars, religious Jews and Christians or anyone else who is interested has a consistent text to read, Hepler said. Modern translations are based on these texts, which are both the oldest and the most refined, because of the involvement of the Masoretes.

The Masoretes are the people that created the Washington Pentateuch, Hepler said, as well as the Aleppo Codex and the Leningrad Codex. They are also the group who decided how the Torah should be ritually chanted, by fixing the text’s vowels and musical notation. Originally, they separated the manuscript and the notation into two documents. But by the 800s or 900s they were combining all of that information onto one page — a big breakthrough.

“It was a huge innovation in any kind of manuscript production, not just Jewish, to have this much information on a single page and for it to still make sense,” Hepler said.

Codices like the Washington Pentateuch and similar texts are books that were written and bound by hand — very different from both the scrolls Jews worldwide chant from in synagogues and the machine-printed versions that students use in schools. Ritual scrolls contain only letters — no vowels, and no notes. The Washington Pentateuch has both of those; it is also highly designed and bound in leather, with metal decorations.

The Masoretes were likely comprised of different leading families, Hepler said, such as Ben Asher and Ben Naftali, who made their living as scribes. They would have created a book like the Washington Pentateuch under the auspices of wealthy patrons, and they also would have supported themselves by doing related work, such as correcting other manuscripts.

The post-Temple era, in which Judaism was shaped by successive schools of rabbis whose commentaries were collected in the Talmud, was well underway by the time the Masoretes were active. But some contemporary scholars theorize that the Masoretes might have been early Karaites — so focused were they on the Five Books of Moses.

The Karaites also played an important role in the preservation of the book that became the Washington Pentateuch; a Karaite community in Yevpatoriya, Ukraine, was the first owner of the book outside the Middle East that scholars know of, although they don’t know when the community obtained it.

Scholars differ on when the Karaite movement crystallized, dating it between the Seventh and Ninth centuries, according to the book “Karaite Judaism and Historical Understanding,” by Fred Astren (University of South Carolina Press, 2004.) Today, the largest community lives in the Israeli city of Ashdod; there is also a community in the United States.

Their religious connection to the Torah inclined them to cherish ancient manuscripts; Cairene Karaites owned the Cairo Codex, which contains the prophetic writings. The Karaites of Russia were likewise avid collectors, which is how they came to possess the manuscript now known as the Washington Pentateuch, in addition to the Leningrad Codex, whose Hebrew forms the basis of most modern translations of the Bible, Hepler said.

“They love Biblical texts,” he added. “Even today, what they collected are our jewels.”