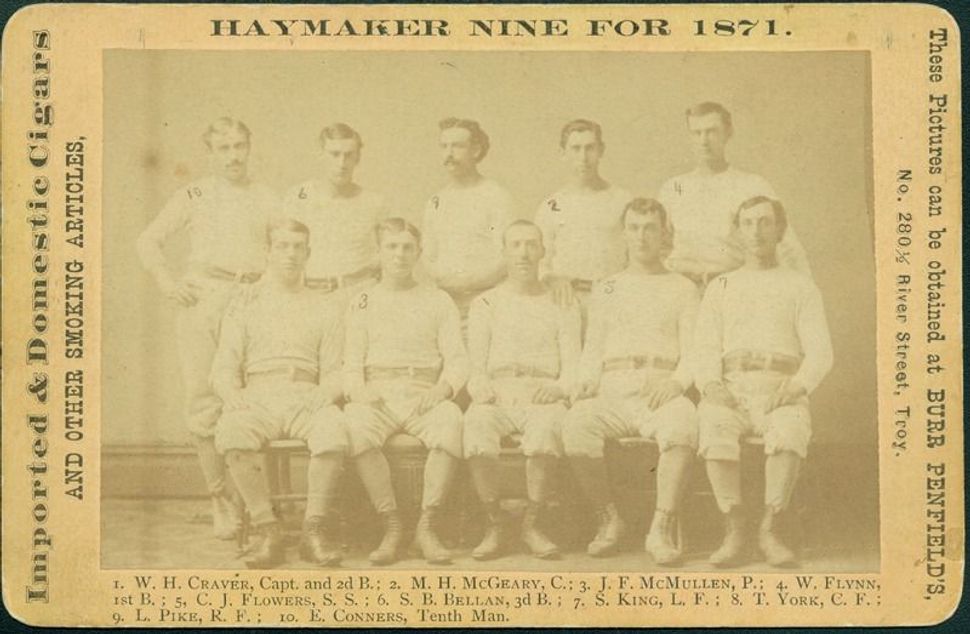 In the beginning — or make that in the beginning of baseball — there was Lipman Pike. He hailed from a big Jewish family in Brooklyn and in the years following the Civil War, as baseball became a major American sport, he became one of its early stars. He was not just one of the first Jewish players, but one of the first players, period. And he was a key actor as the game evolved in significant ways during the 1860s and 1870s.

It was in 1879 that a photograph was taken of Pike and his teammates in Springfield, Mass., and 140 years later, a copy of that photograph was sold for $9,000 at an online auction run by the Robert Edwards Auction House.

Pike was not big by today’s standards. He stood just 5 feet, 8 inches tall, and weighed about 160 pounds. But by the measurements of baseball in the second half of the 19th century, he was considered a slugger. He died at age 48 in 1893. It wasn’t until 40 years later, in the early 1930’s, that the mighty Hank Greenberg emerged as the first full-fledged Jewish baseball star.

Jewish baseball fans are familiar with the basics of Greenberg’s baseball biography. They are well aware that several decades after Greenberg’s ascendance, the great Sandy Koufax — like Pike, a Jewish kid from Brooklyn — became one of the most dominant pitchers baseball has ever seen. And those same fans know that Alex Bregman, the 25-year-old third baseman of the Houston Astros, is the best Jewish player in the game today, and was the runner-up in the voting for the most valuable player in the American League this past season.

Lipman Pike probably does not ring the same bells. Indeed, it’s a safe bet that at least some Jewish fans have no idea who he is, or that his family had Dutch roots. His father was a haberdasher, and Lipman had siblings: Boaz and Israel and Jacob and Julia. But take it from no less an authority than John Thorn, the official historian of Major League Baseball: Pike was an important figure in baseball’s early years. 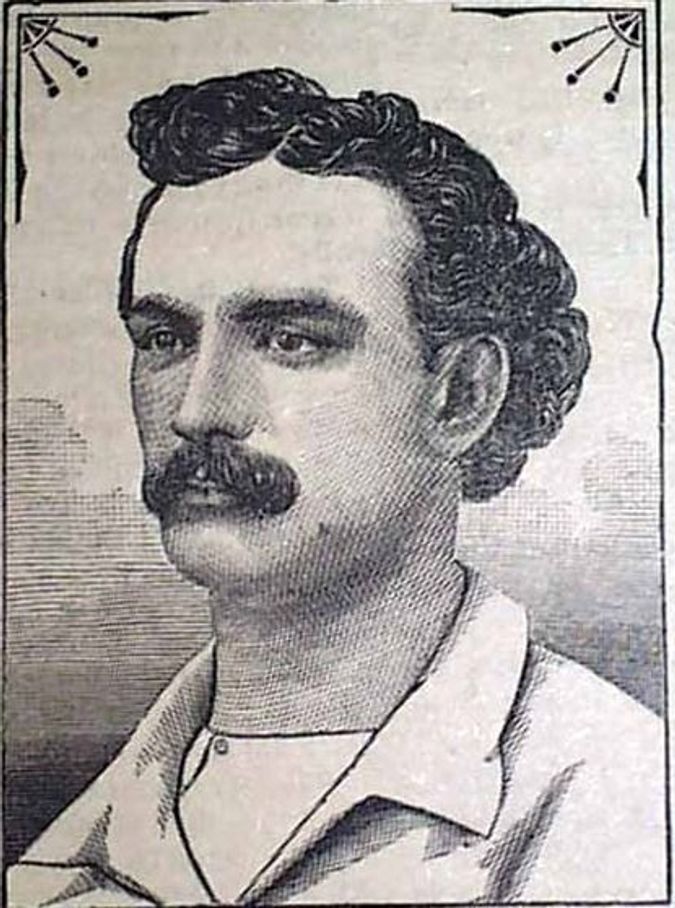 In all, Pike played from 1866 to 1881 and his career had a Biblical feel as he journeyed from team to team, and state to state, and as one league that he would play in eventually begat another. It was a period in which baseball quickly evolved from a sport in which a few of the better players, including Pike, were paid for their services – ”like ringers in a beer league,” said Thorn – to a sport in which teams became fully professional.

Along the way, as documented by Robert Schaefer for the Society of American Baseball Research, Pike played for the Philadelphia Athletics, the New Jersey Irvingtons, the New York Mutuals, the Brooklyn Athletics, the Troy (N.Y.) Haymakers, the Lord Baltimores, the Hartford Blue Stockings, the St. Louis Brown Stockings, the Cincinnati Reds and the Providence Grays. And then, in 1879, he ended up with a minor league team in Springfield, Mass., where that formal photo was taken of Pike and his teammates, 11 people in all.

There are other images of Pike in circulation, including woodcuts, said Brian Dwyer, who is the president of the auction house, located in Chester, N.J. He was not aware of any other pictures like the one that was auctioned, however, in part because of its substantial size — 13 1/2 inches by 17 inches, he said. It features the name of the photographer, identified as H. Buchholz, and the 11 players, who included Robert Ferguson, the player-manager and the owner of a nickname — “Death to Flying Things” — that is surely one of the best ever created and was meant as a nod to his abilities as a fielder.

Pike, who is listed as the center fielder in the picture, is second from the left in the bottom row. And for what it’s worth, Pike also had a nickname — The Lip. So did the colorful and cantankerous Leo Durocher, but Pike beat him to the punch by more than half a century.

Bidding on the 1879 photo began at $5,000 and, Dwyer said, six bids were received, with the winning bid by a private collector on the East Coast. The auction house said that it had previously sold a 1916 Babe Ruth baseball card for $600,000 and had a winning bid of $276,000 for the 1949 contract that Jackie Robinson signed with the Brooklyn Dodgers. The Lip and his teammates did not generate anywhere near that amount of money said Dwyer, but the picture was a draw for a subset of bidders “who are definitely devoted to Jewish players.”

And not all of those bidders are Jewish, he noted. “I know of one man who is not Jewish but who is definitely fascinated by this element of baseball history,” he said.

As it turned out, Pike made it back to the major leagues after the 1879 season, with major league cameos with the Worcester Ruby Legs and the New York Metropolitans (no, not those Mets) that extended his career all the way to age 42. It was while playing for Worcester that he also made several errors in the outfield in the ninth inning of a game, resulting in a defeat for Worcester and accusations that Pike had made the misplays on purpose in order to throw the game. He was suspended. Thorn, in turn, noted that by that point in his career, Pike was not the fielder he once was and that suspensions “were handed out like breath mints back in those days.”

Pike would go on to play one more game, but not until six years later. According to baseballreference.com, what we would consider his career major league numbers came to 425 games played, 638 base hits, 21 home runs, including a season-high 7 in 1872, and a fine batting average of .322.

Those numbers, Thorn noted, were achieved against pitchers who, until 1880, stood just 45 feet from home plate, and threw the ball underhand until later shifting to a sidearm motion. In addition, foul balls did not count as strikes and a batter could select his strike zone before getting ready to hit. 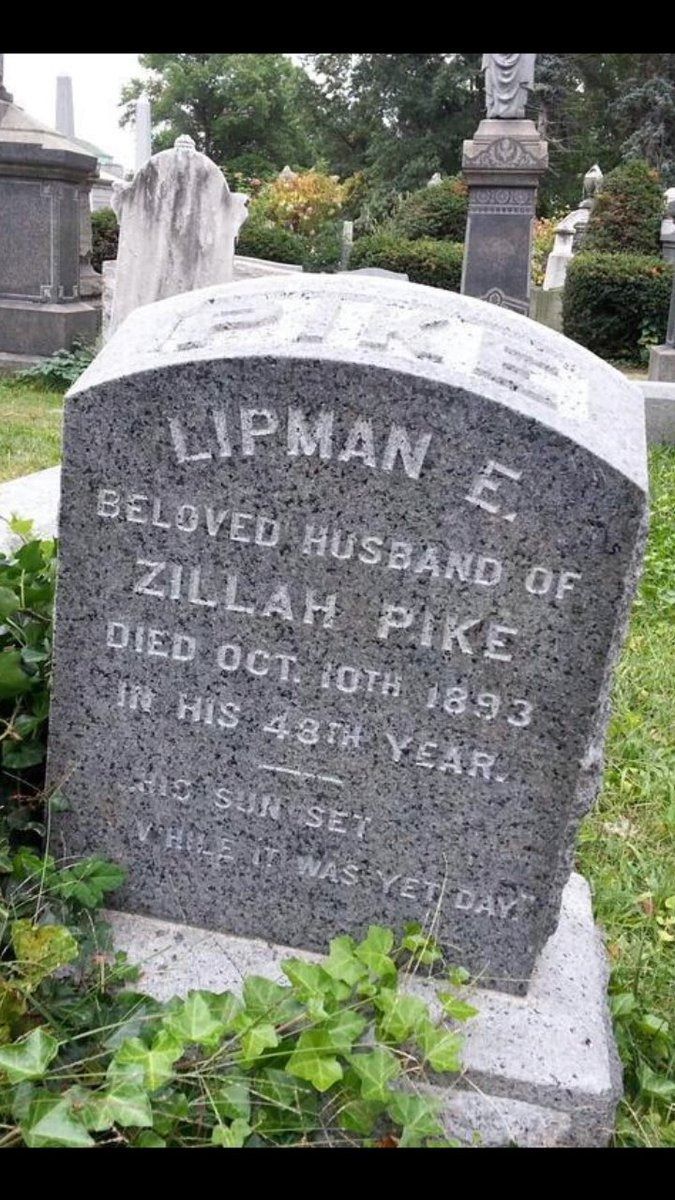 But putting all that aside, Thorn said, Pike endures in baseball history for three reasons: “He was a terrific player, he was Jewish and he got paid.”

And when balloting for the Hall of Fame took place for the first time in 1936, and Ty Cobb, Babe Ruth, Honus Wagner, Christy Mathewson and Walter Johnson all received enough votes for induction, Lipman Pike got a vote, too. Just one, but 43 years after his funeral in Brooklyn, it was a nice nod to a player, who, in the words of one memorial tribute in the Sporting News, “could hit the ball as hard as any man in the business.”

Jay Schreiber was a longtime sports editor for the New York Times.