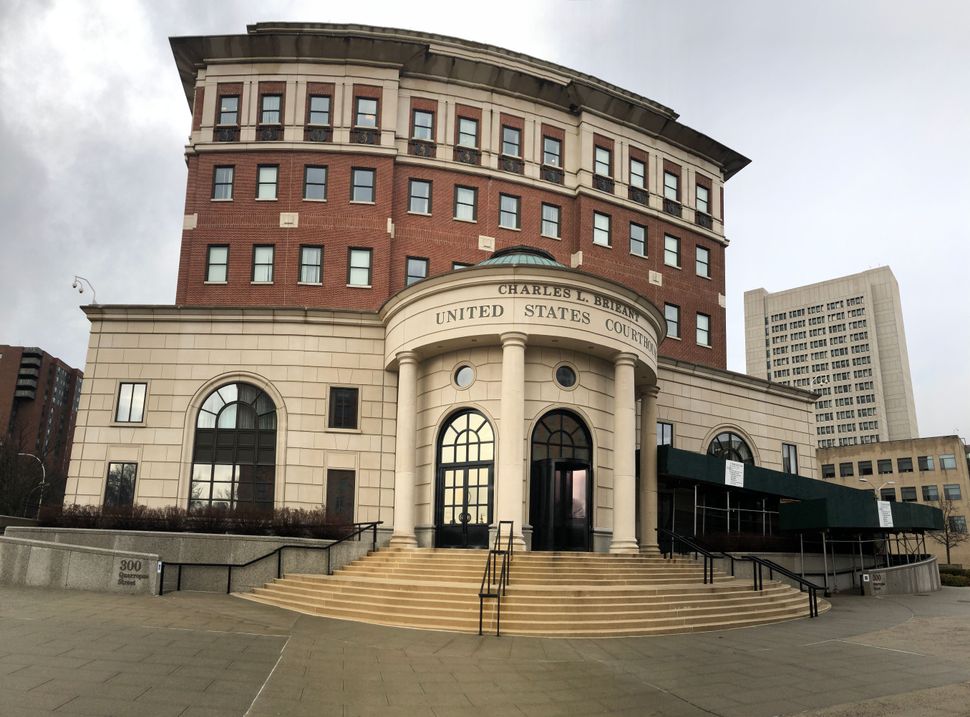 The judge in the East Ramapo voting-rights trial accused a key witness of lying on the stand Thursday, leading the school district’s lawyer to suggest that the case was all but lost and sending it into uncharted territory as testimony is slated to wrap up soon.

The heated outburst came during testimony by Harry Grossman, a soft-spoken Orthodox Jewish member of the East Ramapo school board. In question after question, Grossman said he could not recall or didn’t know basic facts laid out in text messages and emails between him and Orthodox political and communal operators relating to decisions about who should run for seats on the board.

“I am offended by what I have seen here today,” Judge Cathy Seibel thundered from her dais. “I cannot tell a lie. I do not think this witness is credible, to say the least.”

The scene—Seibel’s criticism coming amid indignant interjections from the lead lawyer for the district, David Butler — seemed to push the relatively staid case into the realm of a TV courtroom drama. A trial that began with long discussions on the relative merits of different statistical methods for evaluating racial voting patterns began to reflect the emotion that has characterized the battle over budgets and power in the East Ramapo Central School District for more than a decade.

The district serves a set of suburbs in Rockland County, N.Y., about an hour’s drive north of Manhattan. Its schools enroll about 9,000 students, but it also provides state-mandated transportation and special-education services to some 30,000 children in private yeshivas. The Orthodox majority on the nine-member board has significantly cut teachers, teacher aides and after-school programs, rather than raise property taxes, as the rising private-school population has swelled transportation costs.

The questions asked of Grossman cut to the heart of the dispute: whether there is an informal “slating” organization that decides who should run for the board on behalf of the Orthodox community, then whips endorsements and votes for the chosen candidates.

The slating factor is part of the legal test, created by the U.S. Supreme Court, for lawsuits like this one contending violations of the landmark Voting Rights Act of 1965. The East Ramapo plaintiffs, led by a local NAACP chapter, can use evidence of a slating organization to convince the judge that there is racial discrimination occurring in a voting system.

The NAACP argues that East Ramapo’s at-large voting system disenfranchises non-white voters, and is asking that it be replaced by a ward voting system based on geography in the highly segregated district. Such a system, the lawyers argue, would guarantee a voice on the board for the parents of public school students, more than 95% of whom are black or Latino.

Lawyers for the NAACP have argued in court filings and during the trial that a major force depressing representation of public-school advocates on the board is this supposed slating organization. They say it is composed of several prominent Hasidic figures, including a yeshiva administrator, a community center leader, a former mayor of a Hasidic enclave and an anti-tax activist, among others. Those figures help candidates secure endorsements from Hasidic rabbis, the plaintiffs say, create signs, place ads for their candidates and provide free transportation to the polls for voters.

A WhatsApp chat between Grossman and Yehuda Weissmandl, a board member. Image by Trial document

A WhatsApp chat between Grossman and Hersh Horowitz. Image by Trial document

The existence of such an organization has been repeatedly dismissed by district lawyers, who have likened the accusation to classic anti-Semitic canards.

“That’s part of the grand conspiracy of a shadowy cabal of Orthodox Jews who control election outcomes in East Ramapo,” Butler said in his opening remarks. Instead, he said, the people being fingered as part of such a group are just a “disorganized group of interested people from the Orthodox community,” who help organize support for candidates who will promote policies preferred by Orthodox East Ramapo residents.

Opponents of the Orthodox-controlled board have long suspected there is a slating group—and long been accused of anti-Semitism for saying so.

“The night before the election and those who want to keep the balance of power in their favor,” Eric Goodwin, a two-time candidate for the board, wrote in a Facebook post in 2017. “Spending the night at your religious establishments will not mask your master plan. East Ramapo is watching your every move.”

Testifying in the trial this week, Goodwn denied that this post was anti-Semitic, saying that he was referring to the few individuals he suspected were orchestrating the successful board campaigns, not Orthodox Jews generally.

Evidence presented in court so far has shown that candidates who run with the support of the Orthodox community do not generally gather the hundreds of signatures necessary for their own nominating petitions, don’t buy ads, print fliers or make media appearances. Yet they have won some elections by nearly a two-to-one margin. Several current and former board members have testified that they did not know who gathered signatures for their petitions.

Including Grossman. And when he claimed ignorance that certain prominent people were directly involved in such efforts on his behalf, it pushed past the breaking point of Seibel’s patience.

Grossman was not the first witness to irk the judge in questions over the slating organization. Other board members and someone the plaintiffs claim is part of the slating group had also frustrated her with a series of similar I-don’t-recall responses in their testimony earlier this week. And one key witness—the yeshiva administrator, Rabbi Yehuda Oshry—has refused service of a subpoena to testify for weeks, according to NAACP lawyers.

“I would hate to have to get a U.S. Marshall to arrest a rabbi,” Seibel said on the third day of the trial. “But we’ll see.”

But Grossman really exasperated her. At the beginning of his testimony, he said that he had no idea about what role a man named Shaya Glick played in helping candidates get elected to the board. Yet in WhatsApp chat logs shown in court, the two discussed media strategy and exchanged messages that strongly suggested that Rabbi Oshry, “decided” the candidates and gathered signatures for them.

A chat between Grossman and Hersh Horowitz. Image by Trial document

At one point in their WhatsApp exchange, Grossman asked Glick if any candidates had been selected for the 2017 elections.

“I’ve never known who coordinates this,” Grossman wrote to Glick.

When Grossman could not answer what the “this” was that was being coordinated, Seibel interjected.

“Mr. Grossman, I rarely say this,” she said. “But you did take a solemn vow to tell the truth—under penalty of perjury.”

Grossman continued to maintain he didn’t know what “this” was.

Soon after, he was shown another text message in which he said that a man named “Mark” was reaching out to synagogues ahead of the 2017 election. Grossman testified that he didn’t know who Mark was, despite the fact that a man named Mark Berkowitz was another member of the Orthodox-backed slate.

The NAACP lawyer questioning him then pulled up more WhatsApp messages in which Grossman asked Glick about putting paid ads for the Orthodox-backed slate in an Orthodox newsletter, and going back and forth about an op-ed that Glick wrote for Monsey.com, a local Orthodox news site. Both exchanges fueled Seibel’s frustration that Grossman had not been truthful when he said he didn’t know what role Glick played in East Ramapo school board elections.

Butler, who is representing both the district and Grossman individually, responded forcefully to Seibel, asking her if she was really accusing Grossman of lying. She said she would read back her personal notes and show every place she noted where she thought Grossman was perjuring himself.

“I don’t usually like to preview my credibility determinations” before submitting a verdict, she said. But, she added, “He made his bed and now he’s lying in it.”

After the day’s session ended at Seibel’s preferred time of 2:30 p.m.—before the district had an opportunity to cross-examine Grossman—she gathered Butler and lawyers from both sides in a sidebar. The courtroom was deadly silent, perhaps the better for lawyers and lingering journalists to hear what was being said.

“That’s not definitive,” Seibel said to Butler at one point. “You could still win this case!”