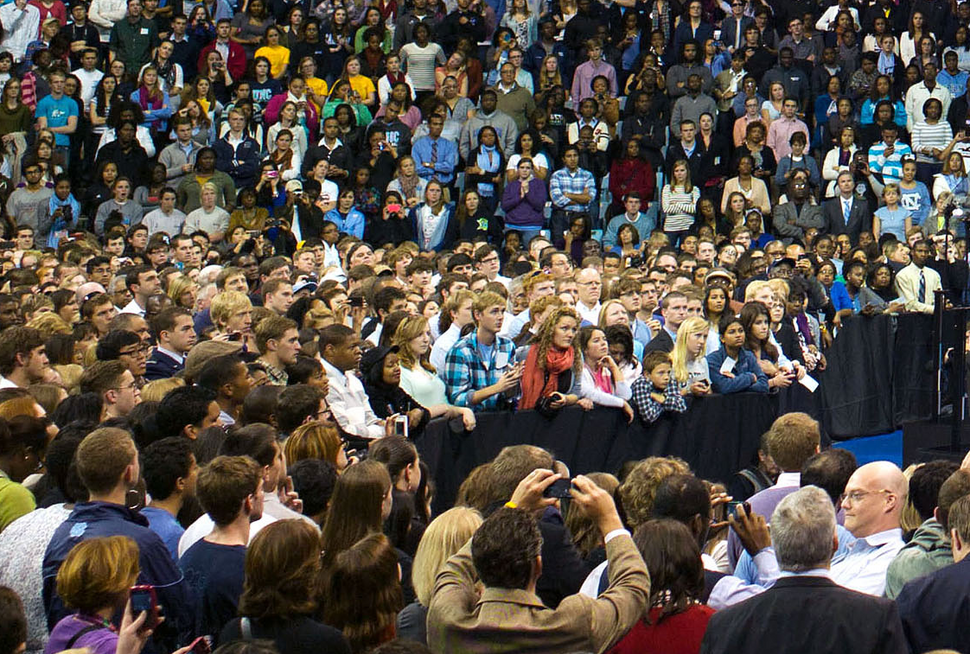 I don’t want to write about AIPAC’s politics. If you’re reading this, you already know about them. You know why the American Israel Public Affairs Committee has been a center of media attention for the past couple of years. You know all of the other things that journalists are saying about Mike Pence and Mike Bloomberg, and the recent waning of bipartisanship that AIPAC had previously founded itself on.

Because to me, a junior at the Abraham Joshua Heschel day school in Manhattan, and to many of the other 3,600 students who were in Washington for this week’s AIPAC Policy Conference, none of that matters.

I consider myself an inspired Zionist. I plan to serve in the Israel Defense Forces after high school, my grandparents live in Israel, and I try to get involved with educational programs about Israel as much as I can. That’s why I initially chose to attend AIPAC for the first time this year. When I arrived, I took note of the huge numbers of people in the crowded convention center. The venue itself is enormous, and it still felt too small to house the 18,000 people in attendance.

I understood that not everyone there was Jewish, but even then, it was heartening to see the diaspora reconnect in that giant auditorium, which feels more like a football stadium. I found a seat in a section heavily populated by high school- and college-student delegates.

I was also impressed by how formally most of the students were dressed. I enjoy wearing a good suit and tie, but I also understand that many people my age aren’t such enormous fans of dressing up. I was proud of the initiative it showed for the students to come to AIPAC ready for serious business.

As I took notes on the speakers, I began to observe what seemed to resonate specifically with the students, as well as with myself. It seemed like the younger generation was the most supportive when the unity between America and Israel was discussed, as well as Israel’s achievements and victories.

Jonathan Conricus, the International Spokesperson for the IDF, gained an impressive amount of sympathy from many of the students. He spoke about the IDF’s victory against Hezbollah, Operation Northern Shield in December of 2019. The operation destroyed six tunnels leading from Lebanon into Northern Israel, tunnels that terrorists had previously used to enter the country undetected.

There was also a tangible shock expressed by the students when Conricus explained that the Iranian military currently has around 130,000 missiles on hand, and is developing smart rockets, with tracking technology. In a conference at which many speakers addressed the enemies of Israel in a vague manner, I certainly appreciated the clarity and detail that Conricus brought to the table.

The AIPAC board members went out of their way to address the students, in a manner that bordered on pandering. They showed a video that consisted mainly of AIPAC alumni who went to the conference when they were teenagers, and now work in politics. Bakari Sellers and Jeremy Bash both made appearances in this video, but I felt that it did not do a very good job of appealing to us as young people.

Anyway, I didn’t come to AIPAC to be pandered to by Jeremy Bash, I came to be informed about the current state of the American-Israeli alliance. And I wasn’t alone in this: When I looked around, I saw many of my fellow students taking a break during the video to check their phones, Snapchat each other, and do all the other electronic things my mother fails to understand.

The flagpole statement that “the students of AIPAC are the future of AIPAC” was offered by quite a few of the speakers. I will admit, even though I am not a big fan of Benjamin Netanyahu, it was inspiring to hear the prime minister of Israel say via video chat that every student at the conference is “making AIPAC stronger than ever.”

By the time Betsy Berns Korn, AIPAC’s brand new president, said that “the work (of the students) is the future of AIPAC,” it felt slightly redundant to me. But I think that the majority of students enjoyed some personal affirmation from the new face of the organization’s leadership.

The next day, when Mike Bloomberg mumbled something about being proud to see so many young faces, no one my age cared much. It didn’t help that Bloomberg’s entire speech was more about himself than it was about Israel, but it just felt very disingenuous to me. It felt like it was tacked on rather than an actual talking point.

I expected the most polarization between liberal and conservative student delegates when Sen. Cory Booker spoke, but I was pleasantly surprised to hear almost all of the students cheering during bipartisan points in his rousing speech.

Booker’s spoke of “the unshakable bond” between Israel and America, and he moved on to give a sermon-esque speech, directly quoting Martin Luther King: “’I’ve been to the mountaintop. And I’ve looked over. And I’ve seen the promised land. I may not get there with you. But I want you to know tonight, that we, as a people, will get to the promised land!’”

Booker moved us all, not because he shared his political views, but because he didn’t. Mike Pence’s speech was the opposite. He gave a glorified campaign speech, mainly about how Trump has a handle on the coronavirus outbreak.

Of all things, the coronavirus does not have very much to do with the American Israel alliance. And the students around me looked pretty confused. It was after Booker and Pence’s speeches that I started to realize why kids come to the AIPAC conference.

I took to interviewing a number of students around my age, to see why they felt the organization is important. A girl named Mya, who is 17, said “it’s important to educate myself, and use what I learn to reeducate my community.”

Ayla, who is 18, said she came for the first time to “learn about the American /Israel relationship.”

And Rachel, a 20-year-old student at the University of Connecticut — who also happens to be my cousin — said “Israel is not a huge topic of discussion at UCONN, but Israel has given me so much. I have the resources to go, so it’s my responsibility to take advantage.”

Overwhelmingly, students were at AIPAC to support Israel and learn more about it, rather than to talk politics.

I also spoke to a representative of one of the many campus Hillel delegations, who told me: “Every student has a different viewpoint, and all students have different knowledge of the alliance between America and Israel. Some students came into it thinking, I’m here, I’m going to talk about X, Y, Z. Some students come thinking, I don’t know much, but I want to support Israel. And I think that’s what it’s about at the end of the day.”

What I learned is that young people went to AIPAC just because they support Israel. Some of them knew an extensive amount about the issues that get discussed there, and some of them knew very little. And like me, a lot of students were confused by the “opposing forces” that were commonly referred to by many of the speakers.

It was difficult to discern without context which enemies they were referring to. Students don’t go to support certain people or organizations, something I’ve noticed many adults at AIPAC do. Students are truly the most bipartisan group at AIPAC.