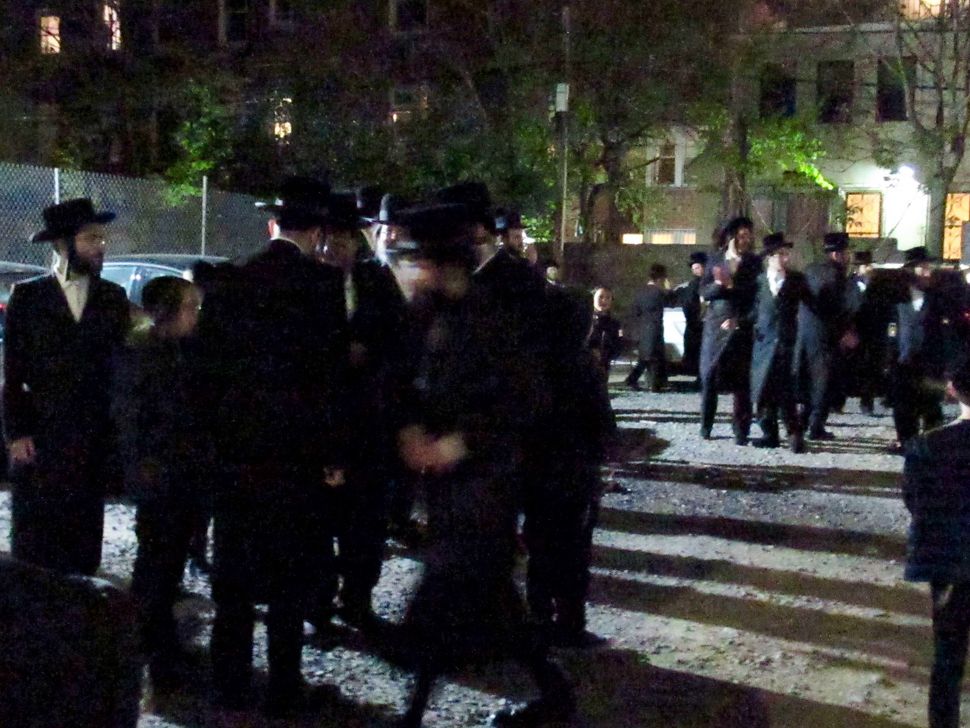 Police broke up a gathering of about 100 Orthodox Jews in Borough Park celebrating a minor Jewish festival Monday night, according to an eyewitness and the New York Police Department.

The source, who spoke on the condition of anonymity for fear of alienating his neighbors, said he heard loud music outside and walked down the block to a vacant lot on 55th Street between 14th and 15th Avenues. There, he saw a crowd of men, women and children gathered to celebrate Lag B’omer, a holiday that constitutes a short break from a weeks-long long period of ritual reflection, at about 9:30 p.m. in violation of state social distancing rules. Violations of the rules can carry fines of up to $1,000.

The source, who is Orthodox and has lived in Borough Park for more than 40 years, said he only saw about two people in the crowd wearing masks.

He called 911, and said the 66th precinct drove up and down the block with sirens for about a half hour before the crowds were dispersed.

The NYPD said in a statement at the group dispersed peacefully within minutes, and that no arrests or summonses were issued.

Videos of other gatherings in Borough Park and Williamsburg surfaced Monday night, showing what looked like a much larger group on 45th Street crowding the road and another on Wallabout Street between Lee Street and Marcy Avenue dancing arm in arm in front of a fire, as is a common Lag B’omer custom. Similar incidents involving celebrations broken up by police also happened in ultra-Orthodox neighborhoods in Israel.

In one of the videos in Borough Park, a person can be heard over a loudspeaker saying in Yiddish, “We’re asking the crowd to be socially distanced, especially for those who’d like to maintain social distancing [unintelligible] benefit of the Jewish people.”

The crowd can be heard responding with jeers, and someone breaks out in a song about a “moser,” or snitch.

The failure of some ultra-Orthodox New Yorkers to socially distance during the coronavirus pandemic by holding weddings or religious services has attracted media attention since the start of the outbreak, but these communities were thrust into the spotlight a few weeks ago after a Williamsburg funeral that saw hundreds of mourners flood the streets. Twelve summonses were issued at that funeral.

After that episode, New York Mayor Bill de Blasio seemed to single out the “Jewish community” as uniquely guilty of violating the rules. He apologized for those remarks and is now trying to reassure city residents that the police force is evenly enforcing social distancing rules. Last week, the Brooklyn District Attorney’s office released statistics showing that 35 out of the 40 people arrested for allegedly violating coronavirus restrictions in Brooklyn were black.

The city has restricted access to two piers in Hudson River Park on the West side of Manhattan, which appeared to be frequented by white sunbathers, and Domino Park in Williamsburg, due to concerns about overcrowding.

The source stressed that 90% of his neighbors are doing the right thing and socially distancing. He said he felt the need to call the police despite the risk of being called a snitch.

“They are killing people and they shouldn’t be doing that, and people need to report it,” he said.