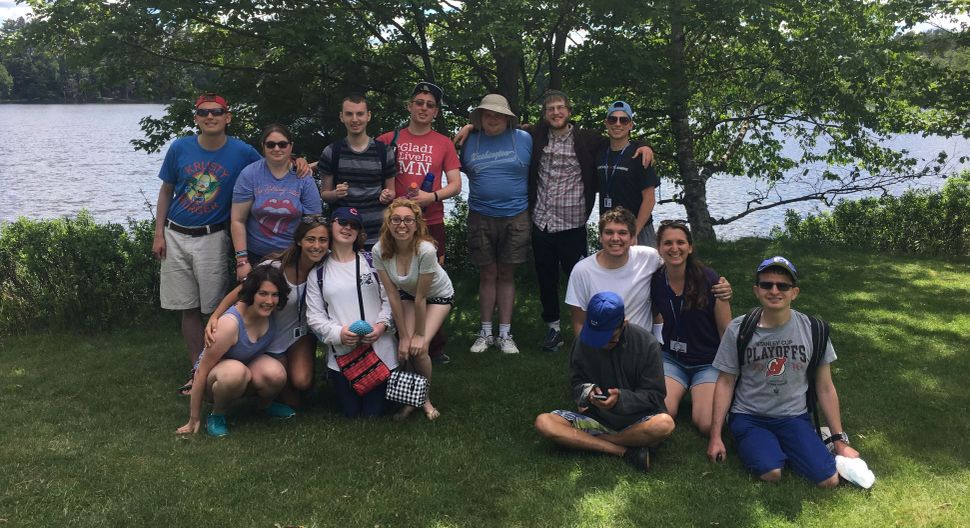 Some of the participants I worked with at Camp Ramah in Wisconsin’s Atzmayim (independent ones) program, which teaches independent living and vocational skills, for participants aged 18 to 23. Image by Ralph Schwartz

One of the most prominent Jewish summer camps in North America is warning area rabbis that the camp faces an “existential threat” and might not stay solvent if they don’t receive a massive influx of donations.

Without donations of hard cash, said Jacob Cytryn, executive director of Camp Ramah in Wisconsin, the camp would have to look into expanding its line of credit, applying for commercial loans, or even mortgaging parts of the property. But bankruptcy has “not come up a single time in our deliberations,” he stressed.

“I turn to you to consider how you and your shul can help us through the greatest crisis we’ve ever faced: keeping Ramah solvent so we can weather a loss of up to $2.6 million in tuition fees and be in a position to operate moving into next fall,” Cytryn wrote in an email to rabbis that was later acquired by the Forward.

Jewish institutions around North America have been battered by the economic crash associated with the coronavirus pandemic. Layoffs and furloughs have been initiated at the Union for Reform Judaism, Jewish Federations of North America and several Jewish Community Centers.

Summer camps, in particular, have struggled with how or whether to open in the midst of the greatest public health crisis in a century. Several prominent camps, including all URJ camps and a few others in the Ramah network, have announced that they were cancelling camp entirely this summer.

Before the pandemic, Cytryn said, Ramah Wisconsin had no debt and “solid cash flow” despite having just paid for the construction of a new arts and performance center.

“$2 million will allow us to begin the next fiscal year with a sense of strength and not kick the can down the road,” he said.

In the email, Cytryn asked for assistance to help the camp raise $2 million by the end of September, the end of their fiscal year, in order to prevent financial calamity. This email was sent to rabbis in large part because synagogues help fund camps by giving scholarships to campers. The letter asked the rabbis to give the camp that money even if they don’t open.

Ramah Wisconsin, the oldest in the Conservative movement’s network of summer camps, told parents and campers at the end of April that they were cancelling the first two weeks of camp, and that other activities were “unlikely.”

This email painted an even bleaker picture about the possibility of camp this summer.

“The number of things that would have to work out for us to open this summer is so lengthy it is difficult to imagine that it will be possible,” Cytryn wrote. “We chose to make this interim announcement with the small hope – nurtured by colleagues at National Ramah and the American Camp Association – that the only thing on our side is time.”

Like most Jewish summer camps, Ramah Wisconsin has said they will honor all refund requests, but they are urging parents to write off this year’s tuition payments as a donation, or at least roll over the payments to next summer. The email claims that a combination of new donations and tuition credits had made up 30% of their fundraising goal, but that they still had more than $1 million left to go. Ramah devised the $2 million number as a benchmark to “give us a sense of having some resiliency and not being in a dire crisis” if the economy worsens and enrollment requests plummet in the fall, he said in an interview.

The camp, like many others that have announced partial or full summer cancellations, has announced plans to conduct virtual programming for campers this summer.

Unlike some other camps in the Ramah network, Ramah Wisconsin uses a religious nonprofit exemption to avoid publicly filing tax returns. Cytryn told the Forward that around three-quarters of their $5.2 million annual budget was comprised of tuition payments. He claimed that “less than 1%” of parents had requested refunds, but allowed that more may do so once camp announces their final plans for this summer — especially if the economy worsens.

Camp Ramah in Wisconsin is also a partner to the Harold Grinspoon Foundation’s $10 million donation match program, which runs through the end of the year and is available to around 100 camps in total. The camp also received loans from the Small Business Administration and has applied for loans from the Jewish Federations of North America and local affiliates.

Ramah Wisconsin is trying to plan for 2021, but Cytryn said it’s “impossible” to know anything for certain until more information is available about how similar institutions like schools, nursing homes and jails are faring.

“We’ve learned so much in the last few months about the disease, and God willing, over the next six to eight months we’ll learn a lot more,” he said.

It remains to be seen whether demand for summer camp will increase in 2021 after a year without it, or decrease if the economy doesn’t recover or a vaccine proves elusive.

Experts say that some camps will likely close if they are unable to raise enough money to counter the tuition losses.

“We’re confident that we’re going to be able to traverse this,” Cytryn said. “I don’t know exactly how.”