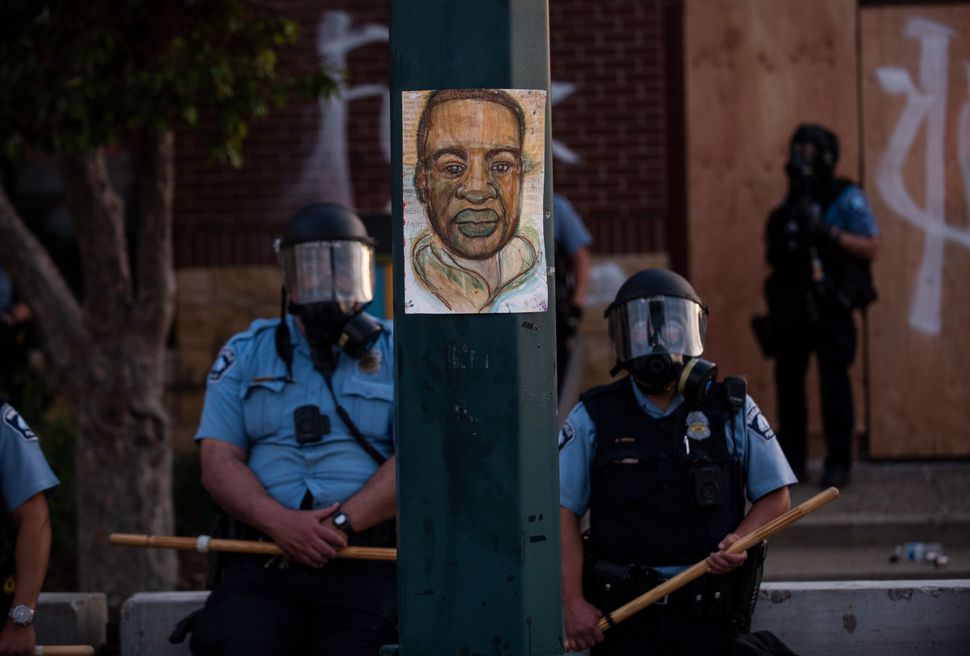 A portrait of George Floyd hangs on a street light pole as police officers stand guard at the Third Police Precinct during a face off with a group of protesters on May 27, 2020 in Minneapolis, Minnesota. Image by Stephen Maturen/Getty Images

The Minneapolis City Council is planning a major overhaul of the city’s police department — maybe even defunding it altogether. The debate has put the city’s Jewish mayor, Jacob Frey, on the hot seat. He says he is opposed to defunding the police, and got booed for saying so at a public rally.

Now, with his high-profile example in front of them, the Jewish community in and near the city has to decide what large-scale law enforcement reform means for their synagogues and other Jewish spaces.

Rabbi Michael Latz, who participated in marches after the death of George Floyd, is feeling different about policing now that he did a few weeks ago.

“I would have thought it was cockamamie mishegas,” he said in a video posted Wednesday. “I couldn’t believe it. And then, I did what we’re taught to do – Shema Yisrael. I started listening to the people.” Now, he says his thinking has changed. “This is not about a few bad apples. The entire orchard is toxic and must be rethought.”

His synagogue, Shir Tikvah, already requires its security personnel to have undergone anti-bias training. More local institutions are expected to move in that direction.

Other Jews are still cautious about what changing notions of security might mean to them. The reduction or elimination of armed security officers, either in the streets of Minneapolis or outside synagogues, can trigger anxiety at a time of rising anti-Semitic violence.

“Eliminating security from Jewish institutions is a mistake that can cost lives,” said Michael Rozin, a security consultant whose local clients have included the Mall of America, Minneapolis Public Schools, the area’s public transit agency and several Jewish buildings.

But more and more local Jews are coming around to the idea that heavy policing makes Jews less safe, not more, said Aaron Berc, an organizer with the local advocacy group Jewish Community Action. And that applies both to the city streets and the synagogue parking lot.

“These are moral questions – what makes us as Jews feel safe, what makes the black community feel safe, and how do we find the sliver of the Venn diagram where those overlap,” Berc said.

Racial disparities have existed for decades in Minnesota, a state that is only around 7% black, said Sheree R. Curry, a freelance journalist who also founded a local network for African-American Jews.

In Minneapolis, African-Americans account for 19% of the population, but 60% of incidents where police use violent force, according to 2017 city data.

It’s not known how many Jews of color are part of the community in Minneapolis because the most recent Jewish community census, taken in 2004, did not ask respondents about their race. Jews of color comprise somewhere between 6% and 15% of the national Jewish population, according to competing estimates.

In 2017, on the 150th anniversary of the Minneapolis Police Department’s formation, activists published a 36-page report called “Enough is Enough,” documenting the department’s decades of failures and systemic biases and deeming it un-reformable. The report, which has been widely shared and adopted over the last month by leading Minnesota activists, calls for the abolition of the police department, with most of its functions replaced by social service agencies.

Some of its recommendations are challenging, Berc said, but it is worth engaging with regardless. “We as Jews have a history of wrestling with our texts,” he said. “Luckily, the report is 36 pages and not 63 tractates.”

That document’s ideas will be part of the conversation as the area’s Jewish community decides what policing reforms mean to them. Jews of color across the country say they have experienced racial profiling in Jewish spaces, and Curry said that happens in Minneapolis, although it hasn’t affected her personally since she moved there.

“I’ve been in the same Jewish community for almost 20 years, so everybody knows me because I’m involved in so much,” she said, but she knows several Jews of color who have been questioned by security officers or otherwise felt unwelcome at synagogues or other institutions because of their skin color.

It’s for this reason that Latz instituted implicit bias training, but Rozin is skeptical of the effectiveness of those trainings. Correcting bad behavior is easier than correcting ingrained fears, he said. Instead, he suggested, Jewish institutions should log every interaction their security personnel have with visitors in order to assess whether those encounters show a pattern of bias.