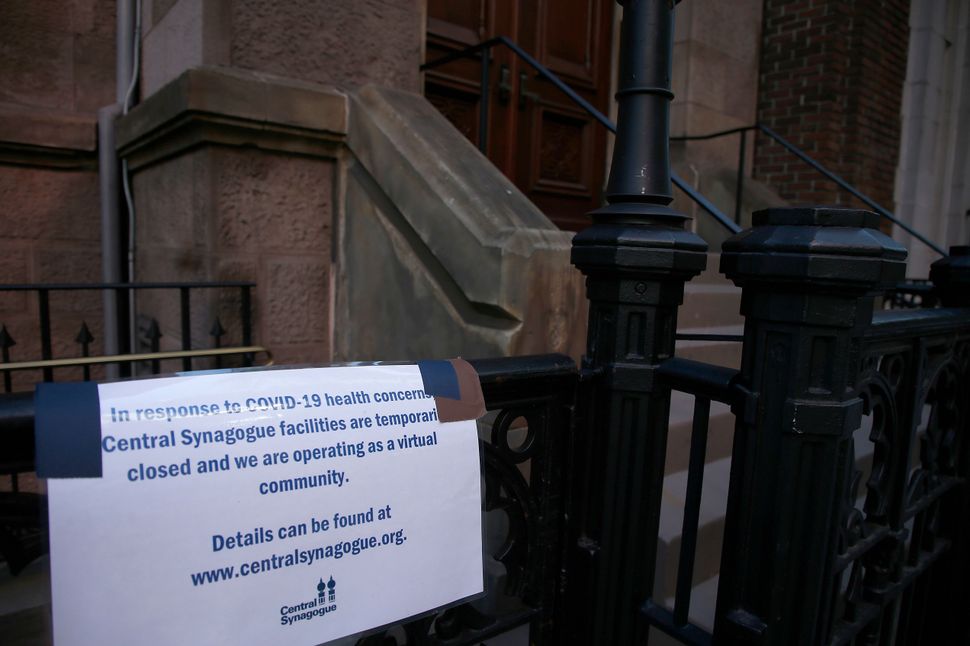 An advisory sign is posted at the Central Synagogue amid the coronavirus pandemic on April 11, 2020 in New York City. Image by John Lamparski/Getty Images

The injunction addresses the purported differential treatment for nonessential businesses and houses of worship under restrictions meant to stop the spread of COVID-19. For example, Sharpe noted that secular businesses’ abilities to operate at 50% capacity indoors compared to the 25% indoor capacity limitation on houses of worship is “underinclusive and triggers strict scrutiny review.”

The judge also raised questions about Cuomo’s allowance for graduation cermeonies of 150 people or fewer outdoors and de Blasio’s favorable messaging toward those protesting the police killing of George Floyd.

“Acting as they did, Governor Cuomo and Mayor de Blasio sent a clear message that mass protests are deserving of preferential treatment,” Sharpe wrote.

The New York officials are now barred from “enforcing any indoor gathering limitation” against houses of worship that are not imposed on secular businesses as long as participants follow social-distancing rules. They also can no longer enforce “any limitation for outdoor gatherings” with social distancing.

**Learn a bisel Yiddish with Rukhl Schaechter’s “Word of the Day” video series on YouTube. **

The injunction comes after a suit was filed on June 10 by two Catholic priests and three Orthodox Jews from Brooklyn alleging violation of freedom of religion, speech and assembly, among other claims.

The lawsuit criticized officials for having “selectively enforced” the rules for houses of worship while approving and participating in “mass demonstrations of thousands of people.”

Throughout the pandemic, observant Jewish residents of New York have claimed that their communities have been subject to unfair scrutiny and over-enforcement. In one instance, after a Williamsburg funeral procession planned with police officers led to New York City Mayor Bill de Blasio to single out the Hasidic community for allegedly not following pandemic guidelines, NYPD officers the next day handed out dozens of summonses to Hasidic residents.