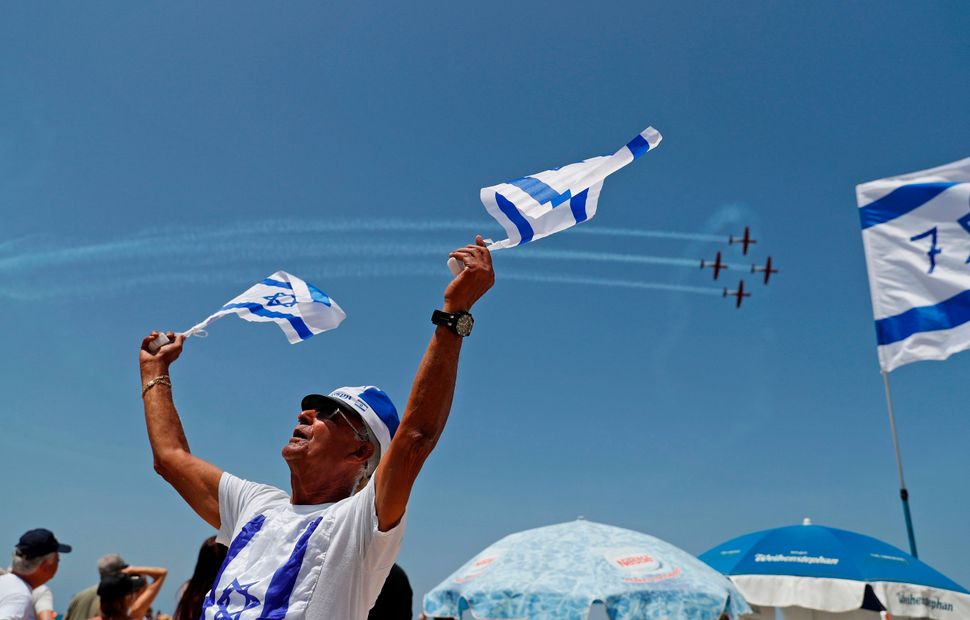 A man waves an Israeli flag on the beach in Tel Aviv during Israel’s Independence Day in 2020. Image by Getty

After an assistant rabbi at a high-profile New York synagogue was called out by his own senior rabbi in public for tweeting that Jews do not count as indigenous people, hundreds of people signed an open letter in support of the junior rabbi’s right to express his views.

On July 8, Rabbi Andrue “Andy” Kahn of Temple Emanu-El wrote that Jews should not consider themselves an “indigenous” people, despite their historic ties to the land of Israel.

His tweets generated considerable attention in the form of hundreds of comments — and no small amount of criticism and pushback.

In a letter to the Forward, Rabbi Joshua Davidson, Kahn’s senior rabbi, wrote that he disagreed with Kahn’s stance in “both its facts and its effects.”

“Whatever point Rabbi Kahn sought to make, and whether Jews meet the United Nations measure of an indigenous people or not, such claims are too easily manipulated by those who seek to undermine Israel’s legitimacy as a Jewish homeland,” Davidson wrote.

In response, a group of rabbis, educators and progressive Jewish writers have signed a letter in support of Kahn written by Abe Silberstein, a writer and graduate student in international policy at New York University. The letter has received nearly 260 signatures as of Tuesday afternoon, Silberstein said. Silberstein is a regular writer for the Forward’s Opinion section.

“What must be condemned in no uncertain terms is the vitriolic defamation campaign to which he has been subjected online, including calls for his firing,” the open letter states.

“What troubled me about Rabbi Davidson’s letter was that it seemed to take at face value the claim that Rabbi Kahn was questioning Jewish ties to Israel, which he did not do at all,” said Silberstein, who added that he is a friend of Kahn’s.

Silberstein said he wanted Emanu-El to know that Kahn had wide support for discussing controversial topics on social media.

Davidson, who is currently on vacation, has not responded to an emailed request for comment. Kahn did not respond to questions for this article. Kahn had tweeted last week that applying the term “indigenous” to Jews was “appropriative,” and “undermines the difficult work being done to fix the ongoing oppression of indigenous peoples.”

Kahn’s tweets came at a particularly tension-filled moment for discussing Israel: The country’s government appears on the verge of annexing parts of the West Bank, a deeply controversial move that a wide coalition of Western governments and politicians oppose.

The tweet came a day after Peter Beinart, a frequent commentator on Israeli politics, released an essay in Jewish Currents arguing that the quest for a two-state solution to the Israeli-Palestinian conflict has failed. This touched off a wave of discussion on the future of Israeli democracy.

Silberstein interpreted the response to Kahn’s tweet — and the broad support his letter received — as a sign that younger Jews who identify as “non-Zionist” or “anti-Zionist” came to Kahn’s defense because they are often marginalized in Jewish life for holding unorthodox opinions, like Jews not being “indigenous.”

“It is just not common for a rabbi at a major congregation to be welcoming of such views, let alone occasionally sympathizing with them,” Silberstein said.

Kahn’s original tweet garnered more than 10,000 likes as well as hundreds of comments, provoking derision, praise and interested debate over the official definitions and meaning of indigenous identity.

In his tweets, Kahn argued that indigenous identity — defined broadly by the United Nations — does not apply to Jews, even though Jews have an ancestral connection to Israel. He added that including Israeli Jews in the category of indigenous peoples would be similar to granting that status to Japanese or French people.

Rabbi Joshua Fixler, an associate rabbi at Congregation Emanu El in Houston and a former classmate of Kahn, said he signed Silberstein’s letter in part because he was frustrated that the people attacking Kahn online did not engage with the argument presented. Fixler said he felt the episode represented some of the potential perils of being a young rabbi on social media, wanting to test out new ideas while balancing responsibility to a congregation.

“When a rabbi tweets his personal opinion, and there is this vitriol fired at him from all sorts of different angles, it does make the rest of us that engage in social media ever more on edge about our own ability to express our opinions,” Fixler said.