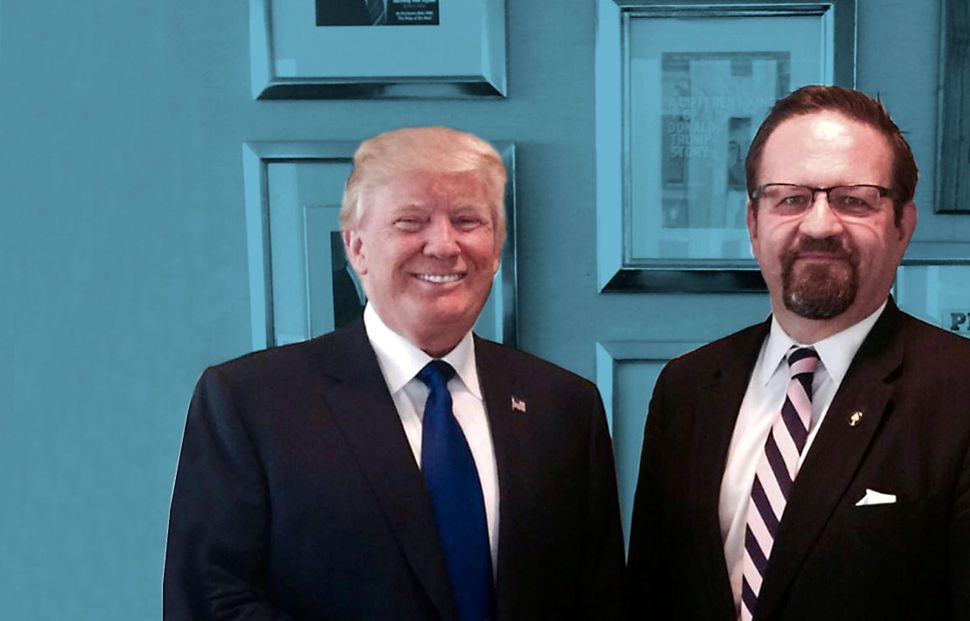 Sebastian Gorka, a previous White House adviser and the subject of a wide-ranging, award-winning 2017 investigation by the Forward, has been appointed to serve as a member of the National Security Education Board, which oversees a program that partners with educational institutions to teach students foreign language skills and cultural competencies.

The Forward’s investigation found that Gorka, then a White House counter-terrorism advisor, swore lifelong allegiance to a Hungarian Neo-Nazi group known as the Vitézi Rend before he came to the U.S.

Gorka’s neo-Nazi ties came to light after he wore the group’s medal on a lapel at the presidential inauguration ball in 2017. In addition to his membership in the group, Gorka co-founded a political party with two Hungarian nationalists, published articles in a white nationalist newspaper and attended events with Hungary’s far-right elite, according to one part of the Forward’s investigation.

The Vitézi Rend was established by a vocal anti-Semite who collaborated with Adolf Hitler during World War II and imposed restrictions of Jews. The group to which Gorka reportedly belongs is a reboot of the original, but it still upholds nationalist and racist principles. An outspoken Hungarian anti-Semite was initiated in 2012.

Vitézi Rend leaders told the Forward that Gorka took a lifelong oath of loyalty to the group. The State Department’s Foreign Affairs Manual says that Vitézi Rend members are “presumed to be inadmissible” to the U.S. under the Immigration and Nationality Act because the group was “under the direction of the Nazi Government of Germany.”

Gorka also declined to answer questions about whether he disclosed his affiliation when applying for his visa or citizenship, which could undermine the legitimacy of his citizenship because it was a “failure to disclose a material fact.”

In Gorka’s 2008 doctoral dissertation at a Hungarian university, as well as during testimony in front of the House Armed Services Committee, he presented his name as Sebastian L. v. Gorka, with the “v” being an initial representing membership in the Vitézi Rend.

Gorka served first as a policy consultant for the Trump campaign in 2015 and later as a White House adviser until then-White House Chief of Staff John Kelly removed him in 2017.

Since then, Gorka worked as the national security editor for Breitbart News and has become a right-wing radio host and political commentator, cheering on the president. At one point, Gorka joined the Rebel, a far-right Canadian news organization that published a video titled “Ten Things I Hate About Jews.”

Gorka has made public his belief that Islam is inherently violent.

Gorka, barring extenuating circumstances, would serve a four-year term on the National Security Education Board.