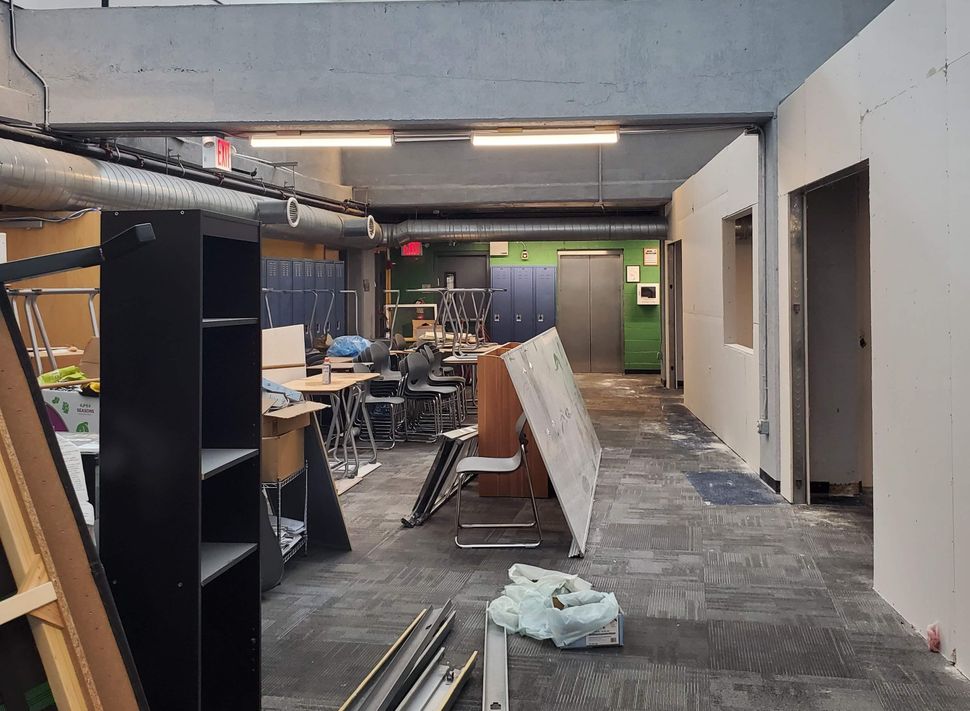 A lifetime ago, SAR Academy in the Bronx became one of the first schools in the country to close down due to the coronavirus. A parent had tested positive for SARS-CoV-2, and his daughter, who attends SAR’s high school, was showing symptoms as well.

Without warning, the school was forced to figure out how to do virtual learning in real time, moving its community’s life to Zoom.

Now, the virus is receding in New York: On Friday, Gov. Andrew Cuomo announced that schools in the state could reopen if their areas had an infection rate of below five percent, a threshold determined by the World Health Organization.

But SAR, as a private school, has already planned an ambitious in-person reopening, overhauling its campus to add and enlarge classrooms, shrink common spaces and get set up to teach outdoors.

“Every space has basically become a classroom,” said Rabbi Bini Krauss, the head of SAR’s Lower School. “We really felt like we wanted to do full steam ahead.”

SAR is one of hundreds of Jewish day schools that are pouring funds into technological, spatial and logistical changes to make on-campus learning possible, even as public school systems remain split on reopening. Los Angeles, Chicago and San Diego have announced that they will open online-only. Georgia’s public schools’ in-person reopening has already caused national uproar, after a student who photographed an overcrowded high school hallway filled with mask-less students was suspended. (The suspension was quickly reversed.) In New York, some districts are allowing parents to choose remote learning or a hybrid model that has students in classrooms only a few days a week.

At the same time, the schools must prepare back-up plans, in case a second wave of the virus pushes them out of the building.

SAR is a Modern Orthodox school in the Bronx’s historically Jewish Riverdale section that mixes prep-school-level secular education with an intensive Jewish curriculum. It is one of the largest and most prominent day schools in the country, with 1,550 students from Kindergarten to 12th grade.

Before classes begin in September, walls are coming down and walls are going up. The Lower School plans to keep the same group, or “pod,” of 15 children together, holding all or most of their classes in the same space. In the High School, classes will be capped at 24 students. To maintain a six-foot distance between desks, the classrooms are expanding, in some cases by several hundred square feet.

Krauss’ office is now a classroom. The business office, lunchroom and gym: all classrooms. The hallways have shrunk.

The architects Hila Stern, of HSB Architecture, and Esther Sperber and Kellen Thayer, of Studio ST Architecture, helped design the changes, a process that began earlier in the summer.

“We realized that if we waited for all the state and city guidelines to come out, there wouldn’t be enough time to do the potential work we’d have to do,” Sperber, an SAR parent, said.

Some of the changes could well be permanent, Krauss said — like installing outdoor classrooms for as long as the weather is nice. But it’s a learning experiment, one that he thinks could actually help students focus better.

“The concept of having 15 kids staying in one place, learning at a different pace, almost with homeroom teachers, is very progressive,” he said. “They’re used to being on this roller coaster, running from class to class, and some of that will be different.” 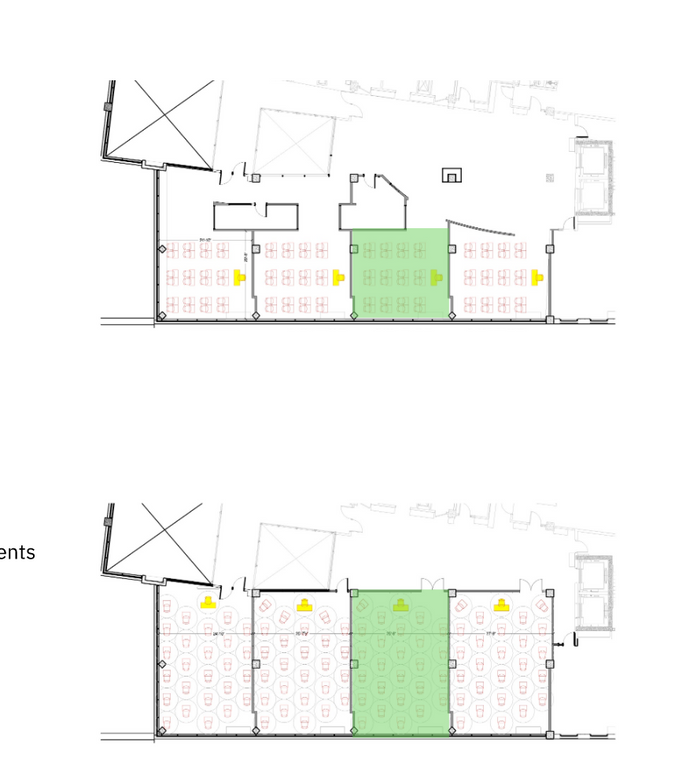 Other day schools across the country have released detailed plans for how school life will be different. There are some broad similarities: near-constant cleaning of learning spaces; socially distanced seating; making learning as digital as possible to avoid transferring papers and projects between students and teachers; and adding increased mental health oversight of students and teachers.

The plans are designed to allow for both in-person and virtual learning, both in case of a second wave and because not all students will be returning to school, as some families don’t feel comfortable sending them.

But the goal is to at least start in person, since the beginning of the school year is a crucial time.

“That’s when relationships are built, and you can really address the social and emotional aspects of a school community as well as the educational ones,” said Paul Bernstein, the CEO of Prizmah, a professional network for Jewish educators and day schools.

The plans some schools have released run to dozens of pages, and seem to preempt just about any question a parent could have.

Ida Crown Jewish Academy, in the Chicago suburb of Skokie, Ill., will use facial recognition technology to make sure that students coming in each morning are wearing masks. Teachers are being provided with small voice amplifiers, so they don’t have to yell behind their masks, risking aerosol droplet dispersal. Unlike in other years, all class seats are assigned.

“Assigning seats will allow for better contact tracing if G-d forbid it may be necessary,” the plan says.

Atlanta Jewish Academy is sending its youngest students a box of learning activities and supplies, a kind of classroom kit to have on hand in the event that they have to switch back to virtual learning. If that happens, the Academy’s high school will double its planned mental health check-ins with students from once to twice a week.

The Shalhevet High School, a modern Orthodox school in Los Angeles, has installed Meeting Owls in its classrooms, a short pillar of microphones, cameras and speakers common in some corporate offices that allow remote learners to see and hear the full classroom from their laptop, and has also put clear Plexiglass walls around the desks.

“It actually creates a kind of nice, comfortable, personal workspace-cubicle vibe,” Rabbi David Block, the associate head of school, says in a video on Facebook introducing the set-up.

The changes the schools are making are expensive. There are costs for technology — the Meeting Owl costs upwards of $999 — for more cleaning staff and supplies, for rearranging the school space, for new, top-of-the-line HVAC systems to purify the school’s air.

Krauss said SAR is spending more than a million dollars on its whole upgrade plan. They are still working on fundraising within the community to make it up, but they haven’t raised the full amount yet — and it’s not clear what the final tally will be.

SAR, like other day schools, is also anticipating a greater need for tuition assistance, for families where one or more parents has lost a job or been furloughed. Some private foundations and community Federations have stepped in to create funds and grants for tuition. Bernstein said Prizmah partnered with the Jewish Community Response and Impact Fund to raise “millions” of dollars for tuition assistance at more than 60 day schools across the country.

The schools are watching Congress closely to see if the next economic relief bill includes grants for schools for personal protective equipment and increased cleaning.

“This is a huge stress point and pressure on the schools, because none of these expenditures were foreseen, of course,” Bernstein said.

Staff and faculty are also showing nerves ahead of the start of the school year, as they balance their students’ safety with their own, or with their parenting duties.

At SAR, to uphold the “pod” model, teachers must work in new ways, and will be spending longer periods of time with the same class — with less opportunity to connect with their colleagues throughout the day. 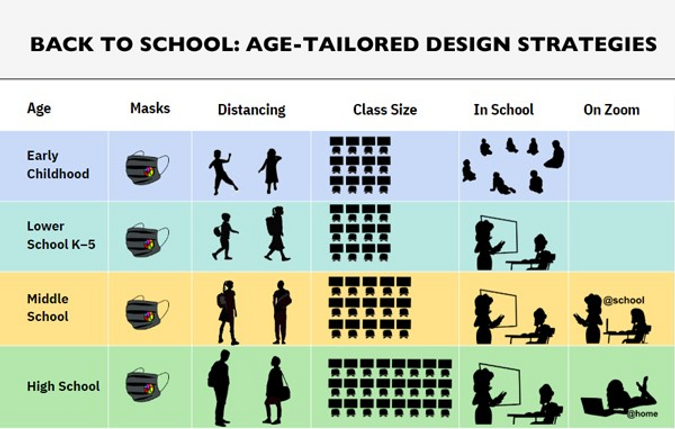 A graphic from SAR’s design plan. Image by Studio ST Architects and lsg.graphics

But for some schools, there is a silver lining to the changes: Enrollment is stable or, in some cases, on the rise.

In previous economic recessions, day school enrollment has suffered dramatically. Now, Bernstein said, some families want to switch their children to Jewish schools, having observed the relative skill with which Jewish schools moved both learning and communal life online. In some states, parents are also responding to scattershot reopening plans from public school systems, where mask wearing is not universally enforced.

The pandemic, Bernstein said, “shows the value of being values-driven, like a Jewish school is, and it’s also shown us the value of strong communities, which our schools have.”