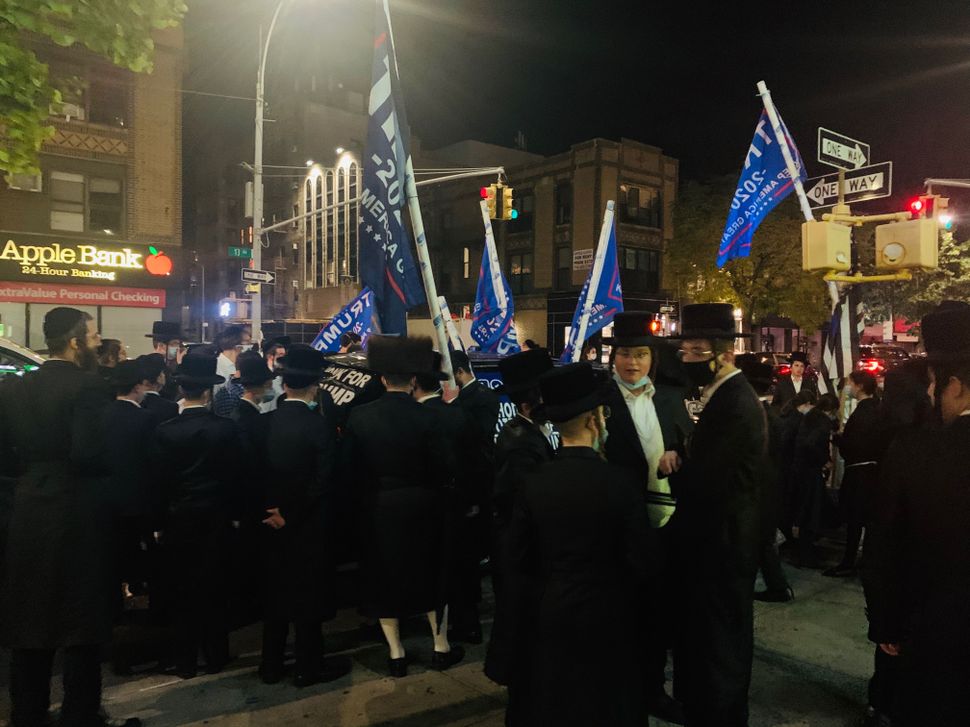 A local rabble rouser had a request for President Donald Trump, which he tapped out and sent into the universe through Twitter on Wednesday.

“We are asking for President Trump to interfere with Gov Cuomo’s hateful decision of tough lockdown on our schools and places of worship,” tweeted city council candidate Heshy Tischler. “#Cuomohatesjews.”

In return for Trump’s help fighting Cuomo’s new COVID-19 rules, Tischler offered a show of support in the form of an event that night, which combined religious dancing with political rhetoric — and lots of Trump flags.

Haredim, also known as the ultra-Orthodox, broadly support Trump — his tax breaks for the wealthy, the establishment of an embassy in Jerusalem, his drumbeat of calls for “law and order,” his support for religious education. In New York City, support for Trump in 2016 was highest in their neighborhoods of Borough Park, Crown Heights and Williamsburg.

But in this time of anguish about a second shutdown of religious life in the name of coronavirus, what was once a political point of view has become a fandom that makes a protest in Borough Park look at least a little like a Trump boat parade in Tampa Bay.

“It’s gone beyond Israel, taxes, now the masks,” said Seth Barron, an expert in New York City politics at the Manhattan Institute. “He’s seen as their defender and Cuomo and de Blasio are seen as Haman.”

Haman is the villain of the Purim story who wants to murder all the Jews of Persia.

The flag-waving and the emergence in Tischler of a populist, Trump-like agitator who calls Black women racial slurs and journalists “snitches” is a relatively recent change that transformed the neighborhood — home to normally very private and attention-shy residents — nearly overnight.

Protesters said that transformation was generated by what some Borough Park residents see as longstanding infringement upon personal liberty and excessive fear-mongering over the coronavirus, which has killed more than 200,000 Americans total and took more than 900 lives on Thursday. On Tuesday, Gov. Andrew Cuomo announced shutdowns of schools and businesses imposed by in hot spots around New York state that correspond to Haredi neighborhoods, including Borough Park, New Square and Kiryas Joel.

That announcement triggered the protest which featured the flags, said Sheya Landa, a Brooklyn political activist. He attended the rally, said his community is finding more meaning in Trump as a symbol now than before.

“I think it’s because of the hatred everyone has now toward the leadership,” he said. “They want to purposely show Trump, Trump, Trump as opposed to any Democrat.”

A juxtaposition of two maps posted on Twitter showed that the Brooklyn precincts that voted for Trump in the 2016 presidential election are largely the same areas of the borough impacted by Cuomo’s new restrictions, which go into effect Friday.

Historically, Haredi Jews have had significant affiliation with Democrats, especially in local elections, and many community leaders, including City Councilors Kalman Yeger and Chaim Deustch, are officially Democrats.

At the city and state level, allowances for substandard secular education at religious yeshivas and resources for fighting antisemitism have been repeatedly traded for a reliable block vote.

But the coronavirus changed things. Both New York City Mayor Bill de Blasio and Cuomo now find themselves on the outs with the community whose support they have worked so hard to cultivate. The Orthodox support for De Blasio was the first to falter, when he criticized “the Jewish community” on Twitter after a large Hasidic wedding without social distancing in April.

Cuomo’s fall from grace was more recent, with Monday’s announcement bringing Borough Park residents out into the street to burn masks.

Trump’s rhetoric and priorities align closely with those of a community that values its religious liberties above nearly all else, and one that is especially vulnerable to disinformation as mainstream media, the library and in some cases, the Internet, are forbidden.

The emergence of more full-throated, public Trump support in Borough Park can also be attributed in part to Tischler, the organizer behind the protests and a candidate for City Council who’s eschewing of political correctness, including statements that reportedly incite violence, has generated him an instant following and possible legal trouble.

Tischler, who supports Trump, has become Borough Park’s own Trump-like figure. He declines to wear a mask and has his own version of calling the media “the enemy of the people” — they are “mosers,” or snitches in Yiddish.

Like Trump, “Heshy Tischler is kind of a rabble-rouser type and a spirited demagogue,” Barron said. “They both are sort of like tummlers,” he added, using the Yiddish word for clowns. But he also said the comparison has its limits, and he doesn’t see Tischler rising to national prominence as Trump has.

Of course, not everyone supports Trump — or Tischler. Some Yiddish news sites called Tischler a “so-called activist” and others blamed him for taking advantage of angry, bored or aimless teenagers. Threads on the same website found voters saying they’re voting for Biden or that they’re voting for Trump “while holding my nose.”