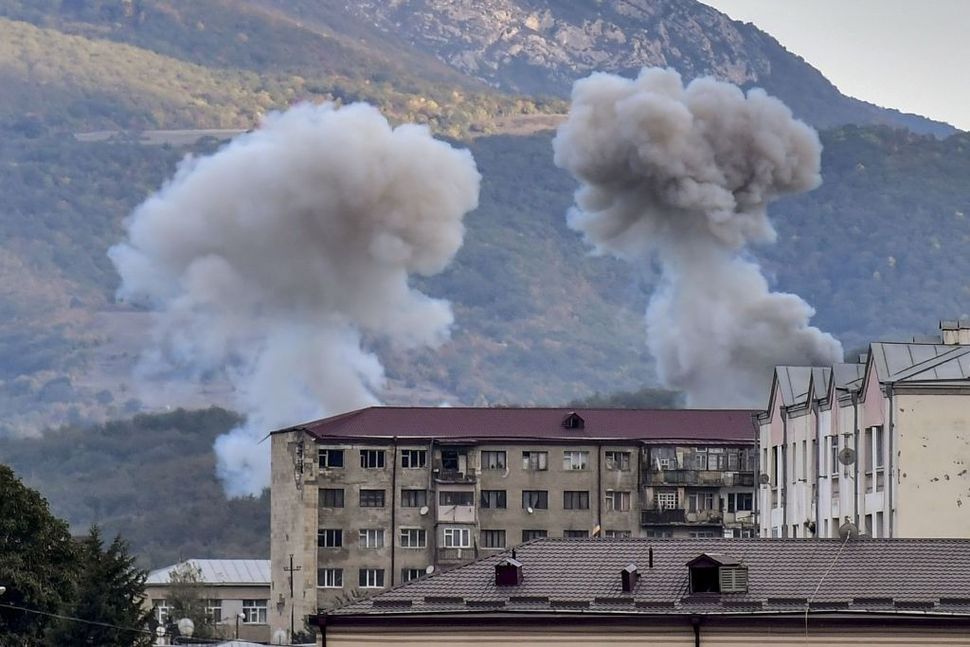 In Azerbaijan as in the United States, synagogues have been largely closed for months due to the coronavirus.

Last week, however, one synagogue received special permission to open their doors — to pray for their country’s victory in its latest bloody conflict with Armenia over the disputed Nagorno-Karabakh region.

“We prayed that there will be no harm, no injuries and everyone will come back home,” Shneur Segal, the chief rabbi of Baku’s Ashkenazi community and an emissary of the Chabad Hasidic movement, said in an interview. “We hope the full territory of Azerbaijan will be back in the hands of those it belongs to.”

Nagorno-Karabakh, located just north of Iran along the border between Azerbaijan and Armenia, is a “frozen conflict zone” — or it was, until late September, when mutual accusations of escalation led to a new “hot” war between the two countries, each created out of the collapse of the Soviet Union.

Both Armenians and Azeris claim Nagorno-Karabakh, yet much of it is held by an Armenian backed independent state, called the Republic of Artsakh, and has been since the first armed conflict over the region, in 1992.

The last three decades of fighting have been motivated by a century of dispute over who controls the region, that they both view as part of their homelands.

Armenians believe that Nagorno-Karabakh has been home to ethnic Armenians for thousands of years, well before Turkic tribes entered the region and mixed with local Persians to create the modern Azeri ethnic group, around the 11th century. 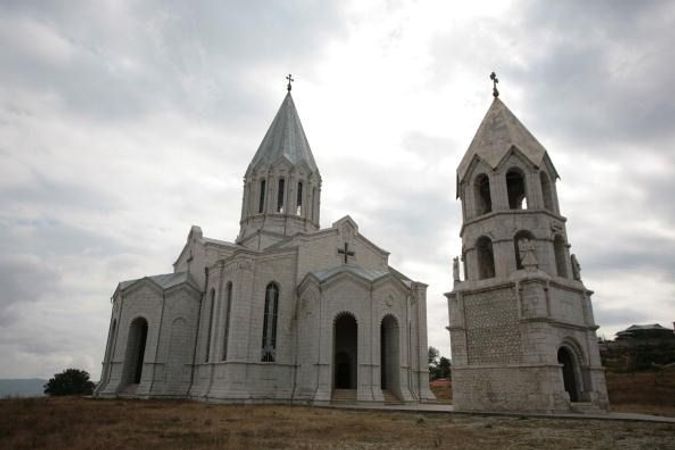 Shusha is considered a city of importance by both Azeris and Armenians. Image by Getty

Yet Azeris consider Shusha, in the north of the region, to be a city of national and historical importance, as it was a center of Azeri culture before the area was conquered by the Russian Empire.

“I believe we’ll hold our next sermon at Shusha,” Segal said during his synagogue’s service, according to Turkey’s Anadolu Agency.

Though most countries haven’t taken a side in the current conflict, the international community has largely recognized Azerbaijan’s claim to the region since the 1990s.

The current conflict has led to the most intense fighting that Nagorno-Karabakh has seen since the early 1990s. Following a few clashes over the summer, it began in earnest in late September. Both sides claim the other struck first, both have seen heavy casualties, and both have seen their civilian populations, even outside of the conflict zone, targeted.

It’s further complicated by each side’s allies. Azerbaijan has received significant arm sales from Israel in recent years, as one of their few allied Muslim nations. Armenians have reported Israeli made-weapons being used on Armenian villages in Nagorno-Karabakh, prompting the country to recall its ambassador from Israel in early October.

However, far more troubling for Armenians is Azerbaijan’s biggest backer, Turkey. The memory of the Armenian genocide — perpetrated by the Ottoman Empire in the early 20th century, as it transitioned into the Turkish Republic — is fresh in the minds of Armenians, and war with Turkish backed enemy has led some Armenians to say that the conflict is an existential threat.

Armenia, on the other hand, is backed by both Russia and Iran.

When Rabbi Segal said he would give his next sermon in Shusha, he was speaking to the desire of Azeris to reconquer a region they feel was stolen from them 30 years ago.

“We prayed for every soldier and our army, which fights for our motherland,” he said at the service.

Across the battle lines though, in a Sukkah in Armenia’s capital, Yerevan, Armenian Jews prayed too.

“I sat there with my mask on to protect against COVID-19, next to a Lubavitcher rabbi, praying that Israeli bombs won’t fall on Armenian lives,” an Armenian Jew named Rachel told Haaretz.

Unlike Armenia, which has only about 500 Jews, Azerbaijan has a large and diverse Jewish community, estimated by its members at around 30,000.

Azerbaijan is the only place outside of Israel and New York state to contain an all-Jewish town. Qirimizi Qeseba, sometimes known by its Russian name, Krasnaya Sloboda, is an enclave of Azerbaijan’s “Mountain Jews,” who have been present in the Caucasus Mountains since as early as the 8th century BCE.

In addition to the Mountain Jews, who make up the majority of Azerbaijan’s Jewish community, there is also a significant community of Georgian Jews and Ashkenazi Jews who filtered in during the days when Azerbaijan was part of the Russian Empire and, later, the Soviet Union. Rabbi Segal estimated that there are about 6,000-7,000 Ashkenazi Jews in Azerbaijan.

“Jews have lived here for such a long time, and everyone in the community feels a full part of the local society. They’re excited by its achievements, saddened by its challenges and their hearts are frightened when there is a war going on,” Segal explained. “For many Jewish families, their kids have gone to take part in the battle and are fighting in the war as citizens of this country, and even parents who had already served in the army have been called up [for reserve duty].”

It’s not the first time Azerbaijan’s Jews have feared for their children in Nagorno-Karabakh. 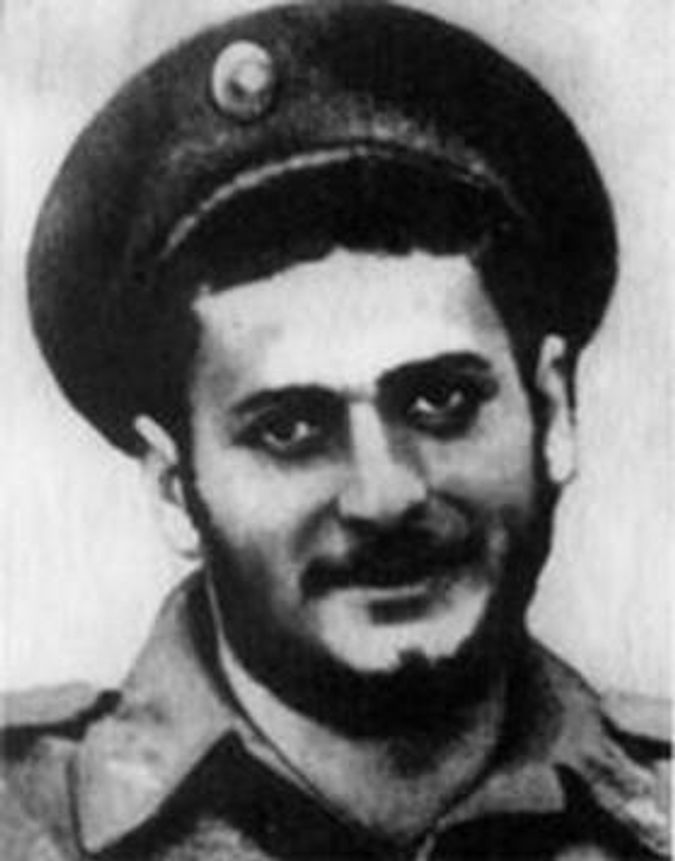 Albert Agarunov, An Azerbaijani Jew who died fighting in Shusha during the first Nagorno-Karabakh Conflict in 1992 is registered as one of Azerbaijan’s national heroes. Image by Wikimedia Commons

Albert Agarunovich Agarunov, a Mountain Jew from Baku, is registered in the list of Azerbaijan’s National Heroes and is often touted by local politicians as a war hero. He died in Shusha in 1992, fighting for Azerbaijan in the first Karabakh conflict.

“People are calling and asking to pray, asking what they can do from a religious point of view,” Segal said. “So we held a service.”

Azerbaijani Jews who live outside the country have also spoken out over the conflict. In Israel, over the summer when the first clashes broke out in Nagorno-Karabakh, 600 Azerbaijani-Israeli Jews marched outside of the Armenian Cultural Center in Jaffa, in support of Azerbaijan, the Jewish Press reported.