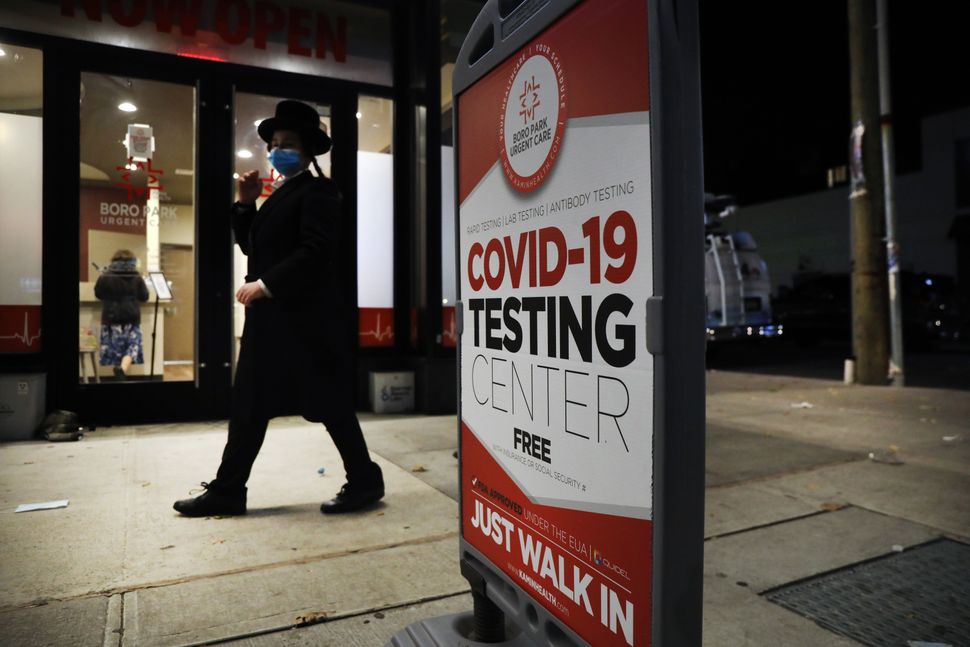 A COVID-19 testing site stands in the Brooklyn neighborhood of Borough Park on October 07, 2020 in New York City. Image by Spencer Platt/Getty Images

Borough Park’s high Covid case rate is well-documented. But city data also shows that the neighborhood has among the lowest testing rates in New York City.

The relative lack of testing could mean that Borough Park and other coronavirus hotspots are actually even hotter than we know, said Mark Harrington, the executive director of Treatment Action Group and a member of the community advisory board for the city’s test and trace program.

And as the community chafes against coronavirus prevention measures like testing, New York City Mayor Bill de Blasio said Tuesday that he regrets that he didn’t prompt “more dialogue that was needed” when he visited the scene of a large Hasidic funeral in April and called out “the Jewish community.”

What parts of the city are we talking about?

The city and state have been focused on nine ZIP codes in Brooklyn and Queens that, as of two weeks ago, which is the most recent data available, had a rate of positive tests of more than 3% over seven consecutive days — almost twice the city average, which is 1.64%

The neighborhoods are densely Jewish — either ultra-Orthodox, also known as Haredi; Mizrahi, with ancestors from the Middle East and North Africa or Russian.

Borough Park, Bensonhurst/Mapleton, Flatlands/Midwood, Sheepshead Bay and Brighton Beach all have testing rates below average, while also having some of the highest test positivity rates in the city over a period of four weeks.

How does testing relate to high positivity rates?

Most other neighborhoods with testing rates similar to Borough Park, like Ocean Hill-Brownsville and College Point, have lower rates of positive tests, according to city data by ZIP code.

That suggests that Borough Park in particular could have a higher number of infections than are being counted.

There’s no way to know for sure why Borough Park is so under-tested, but the consequences could be widespread.

“Less testing leads to more asymptomatic cases spreading,” said Eili Klein, an associate professor of emergency medicine at Johns Hopkins. “If you don’t catch those cases, particularly in communities that have multigenerational families living together under one roof, it can start to spread fairly quickly.”

It’s also possible, Klein said, that “if only people were symptomatic were testing, the positivity rate would be higher than it would be if everyone were testing.”

Why is there less testing in Borough Park and other Haredi neighborhoods?

Just before Sukkot, the harvest festival that happened the first week in October, a robocall landed in voicemails around Borough Park. A holiday greeting it was not.

One must not obey the authorities, “even if they force you, even if they beat you like the Jews in Israel, and especially not voluntarily, and one must also not go get tested because this raises the statistics in our neighborhoods,” said the unidentified speaker in Yiddish.

The data suggest that this kind of social pressure and fearmongering, spread through WhatsApp groups, blasted from cars driving around Haredineighborhoods and circulated by yeshiva administrators, are working, and residents of Borough Park are not getting coronavirus tests when they feel sick or suspect they have been in contact with an infected person.

Why is there less testing in Russian-Jewish and other non-Haredi areas?

In some Russian-Jewish areas like Sheepshead Bay, voters turned out in force for President Donald Trump in 2016, a man who asked federal officials to “slow the testing down” to slow the growth of the country’s positivity rate.

The president’s skepticism about testing could be related to low testing rates in neighborhoods that voted for Trump.

Some Russian-Jewish and Sephardic neighborhoods, like Gravesend/Homecrest, Edgemere/Far Rockaway and Midwood have high positivity rates but also higher than average rates of testing, so may have better access to testing or fewer qualms about getting tested.

Aside from the negative messaging around testing, Harrington suggested that low rates of testing could also be attributed to confusion about when to get tested. That would explain low testing rates in some non-Orthodox neighborhoods, like South Ozone Park in Queens.

“Remember when the messaging was that you should only get tested If you have symptoms? And then there was messaging that was like, if you have symptoms, you don’t even need to bother having a test, just self-isolate for 14 days,” said Harrington. “Now, if you go to the city website it’s like, everyone should get tested.”

This probably doesn’t explain the particularly high Covid rate in Borough Park, whose ZIP code, 11219, has two mobile testing centers and two static testing centers. That’s the same total number of testing centers as the ZIP code for Manhattan Valley/Morningside Heights/Upper West Side, which has the highest testing rate in the city.

But nobody knows if it’s harder for some people to get tests.

The city declined to provide a list of testing sites, citing the changing locations of mobile testing centers and the existence of testing regimes in schools. A spokesman for Mayor Bill de Blasio, Bill Neidhardt, and for the city’s test and trace program, Julie Bolcer, did not respond to questions about how the city deploys mobile testing centers without a list of existing testing sites.

Experts, including Harrington and Klein, found that surprising.

While the city says it deploys testing centers based on need, the most under-tested ZIP code in the city, 11419, Richmond Hill/South Ozone Park has only one static testing center and no mobile testing centers deployed as of Wednesday, according to a city search tool.

Is coronavirus in the hotspots getting better or worse right now?

The number of cases for the population of each ZIP code — called “case rates” — saw a sharp increase until the city identified a surge in what it called the “Ocean Parkway Cluster,” which included Midwood, Borough Park, Bensonhurst, Kew Gardens and Edgemere/Far Rockaway.

The first week of Gov. Cuomo’s cluster action initiative, Oct. 6, is the last week in the city’s four-week dataset, and shows sharp decline in most Orthodox areas.

When will we really know what this all means?

Case rates and positivity rates are only one side of the story, said Klein at Johns Hopkins, which has been tracking testing data.

He said we won’t know whether testing is accurately capturing cases until a few weeks from now, when death rates could rise.

“The case rate will go up first and the positivity rate should go up—generally those two things go up first,” he said. “Then hospitalizations and deaths will follow weeks and then several weeks later.”

Right now, a red cluster of higher death rates is visible in South Brooklyn, though the highest death rates in the city are currently concentrated in northern parts of the Bronx.