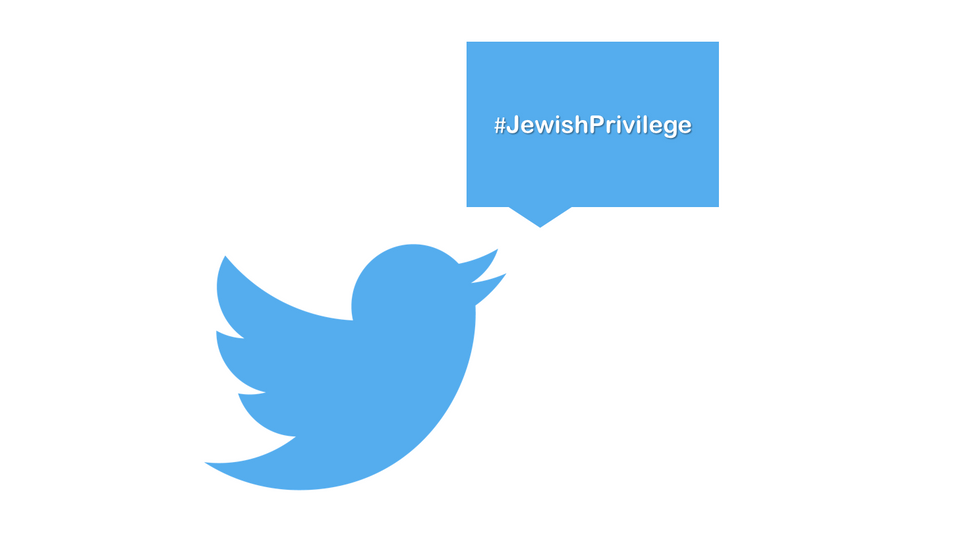 Let us know what you think: [email protected]

JOIN THE CONVERSATION: Thursday at 7 p.m. ET the Forward is hosting “How Disinformation Threatens our Democracy,” a Zoominar featuring Molly and experts from the ADL, Media Matters and the Alethea Group. Click here to sign up.

Hate communities shared posts about what users called the under-reporting of “Jewish privilege” by mainstream media, according to ISD’s analysis of the week ending Oct. 14.

At the root of the chatter was a tweet by Ann Coulter, the conservative pundit, who asked why “Jewish privilege” is a smear, while white privilege is apparently not.

Coulter’s question was discussed by the anti-immigration website VDARE and Canadian far-right commentator Faith Goldy. A Twitter account linked to the Nation of Islam also tweeted about how Jews “were major traders” in labor by enslaved people and “Jews had NO INTEREST in ending Black slavery,” an indication of “Jewish privilege.”

One user wrote about how wealth redistribution in the United States should start with “PHONY, Left-Wing #Jews #JewishPrivilege.”

Other accounts connected Facebook’s recent ban on Holocaust denial to “Jewish privilege,” noting that the platform did not announce bans on content related to denial of the Armenian genocide.

JewishPrivilege first generated engagement on Twitter this summer, with posts using the hashtag about how Jews control money, politics and the government. Jewish users like the comic Sarah Silverman then reclaimed the hashtag, making sarcastic posts about the “privilege” of experiencing persecution and abuse.

At the time, Twitter’s “trending topics” feature had amplified the hashtag. The New York Times reported last month that Twitter would add explanatory tweets to the trending topics so users could understand their origins and avoid amplifying hate.

Imran Ahmed is the chief executive officer of the London-based Center for Countering Digital Hate and serves on a British government committee focused on countering extremism. This interview has been lightly edited for length and clarity.

Ahmed: Facebook should not profit from the deliberate spreading of anti-vaccine misinformation.

Certainly scientists, certainly medics, certainly those on the front line of the coronavirus crisis, the billions of people around the world who have had to take unprecedented steps would say, how dare you profit from spreading information that undermines our fight to contain a virus that has already taken so much from us?

What do they want, applause?

Boigon: Why do you think Facebook has a reputation for failing to enforce its terms of service?

Ahmed: It’s a question that dates back to the early days of democracy: Quis custodiet ipsos custodes? Who guards the guardians?

You have an industry that self-regulates, for which there are no consequences because Section 230 of the United States’ Communication Decency Act gives them ultimate rights. It gives them legal protections by shielding them from liability and preventing them from being seen as the publisher of the content, but it also has the good Samaritan clauses that allow them to moderate their content without becoming a publisher.

Boigon: One good Samaritan clause says that no providers, including social media companies, “shall be held liable on account of any action voluntarily taken in good faith to restrict” content like harassment or disinformation.

Ahmed: The companies say, we need the good Samaritan clauses so that we can moderate. But then, they often say, we can’t moderate because it would undermine our legal rights as a platform. They try to have their cake and eat it too.

We haven’t put together the tools that we need for consequences. You could have a super-regulator, you could do Section 230 reform, you could do tort reform so that people who are harmed by content that’s spread in breach of terms of service could take action against the platforms.

Boigon: Why are we as a society failing to contain disinformation?

I analogize it to the creation of the nuclear bomb. The nuclear bomb didn’t end society. It forced us to rethink politics, geopolitics, our risk tolerance, the use of force, leadership. We’re going to have to rethink the way that we communicate.

Molly reads— and writes— a lot about disinformation so you don’t have to. Here are three articles from other sources and three from the Forward worth a look.

“They said their national security experience had made them ‘deeply suspicious that the Russian government played a significant role in this case.’” Read more.

“Amplifying prophecies about attacks on the legitimacy of the election ultimately positions QAnon to continue past November. If Trump loses, the prophecy of the deep-state color revolution will have come true.” Read more.

Colorado is fighting back against election misinformation “If someone were to claim Colorado’s ballots were lost in a fire, the office could buy ads linked to searches for ‘Colorado ballot fire’ and get the top results, with the ads providing real information.” Read more.

The Forward’s coverage of disinformation and conspiracy theories We explored how disinformation about coronavirus testing is leading to low rates of testing in Orthodox neighborhoods, wrote about how neo-Nazis recruit and spoke to experts who said Facebook’s recent burst of altruism isn’t as pure as it seems.

HATE TRACKERS, WEEK ENDING OCT. 14 ISD has developed a tracker that scrapes social-media platforms for hateful posts, then has researchers review each post, categorize hateful users based on their ideological motivations and use keywords to examine their conversations. To read more about ISD’s methodology, click here, and to see its full weekly report, click here. 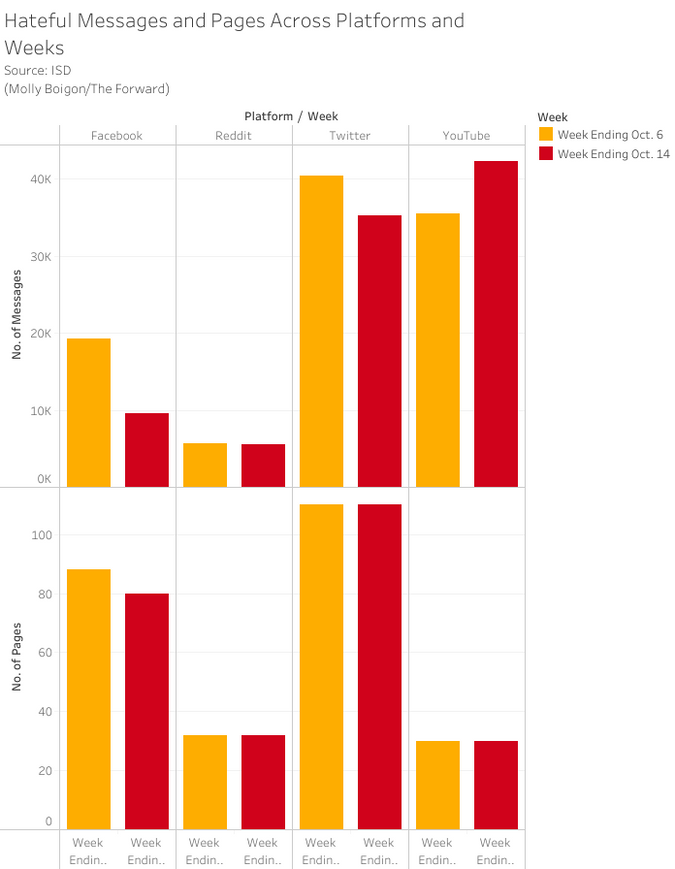