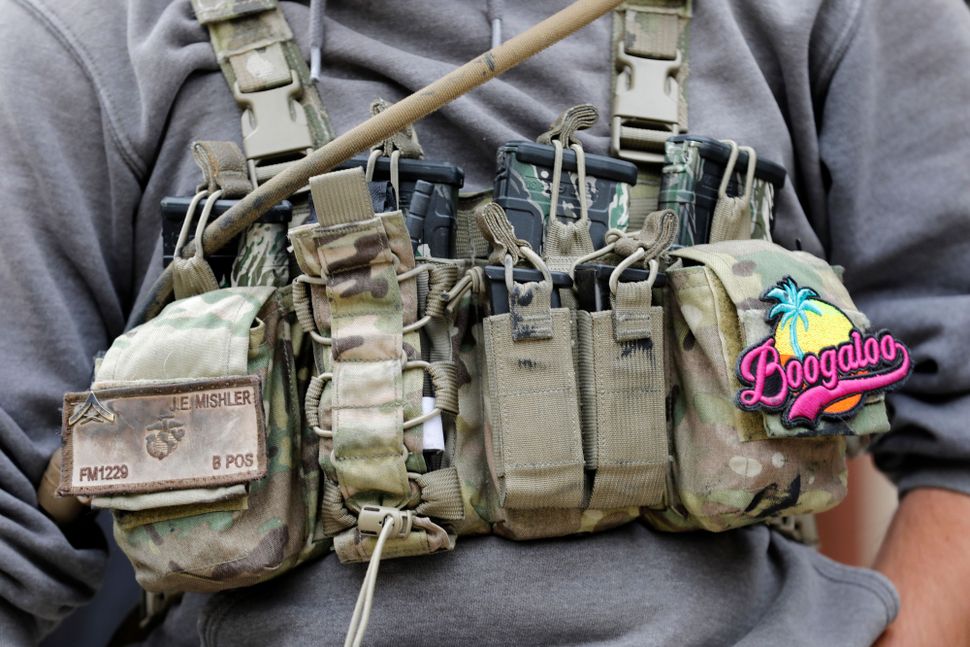 A group tied to the Boogaloo Bois holds a rally as they carry firearms at the Michigan State Capitol in Lansing, Michigan on October 17, 2020. Image by JEFF KOWALSKY/AFP via Getty Images

Welcome to FAHRENHEIT 411, a special newsletter on disinformation and conspiracy theories ahead of the 2020 presidential election. It is produced in partnership with the Institute for Strategic Dialogue, a London-based think tank that studies extremism, and written by Molly Boigon, an investigative reporter at The Forward.                             Let us know what you think: boigon@forward.com

JOIN THE CONVERSATION: As we wait for the polls to close, Molly and other Forward journalists will be on Facebook Live at 5:30 p.m. ET talking about all the Jewish angles of this most important election.

Those hate communities shared posts about post-election violence nearly 950 times across Facebook, Twitter, Reddit and YouTube over the week, ISD reports, with many linking to a Seattle Times article that covered various police departments’ preparations in the case of election-related unrest.

Some groups promised to “defend” local property and businesses,” get the “citizens militia” ready,” get “locked and loaded for the libs, antifa, rioters” and use “whatever force it will take.”

ISD also documented cases in which members of hate communities shared an article from the conservative blog American Thinker, which predicted “unprecedented demonstrations, many violent” with “more violence and chaos, metastasizing like a cancerous growth,” a popular form of disinformation that portrays planned protests as violent mobilization.

That piece prompted outright threats from Facebook users in Minnesota, Illinois and Missouri, who wrote that “there’s going to be a lot of dead antifa and BLM laying on the ground,” and implored other users to “stand ready and stand by.” That last phrase echoed one used by President Donald Trump in the first presidential debate regarding the Proud Boys, a right-wing group with ties to white supremacists, whom he told to “stand back and stand by.”

The most recent data is the latest indication of a trend during this election cycle: Preparation by militia-related groups for planned violence by various bogeymen, ranging from anti-facist demonstrators to Black Lives Matter protesters to Michigan Gov. Gretchen Whitmer.

The frequency of this type of chatter accelerated rapidly in September, after a former national security adviser to President Trump wrote about an impending Democratic coup tied to George Soros.

Some members of the Boogaloo movement espouse white nationalist or antisemitic views, but the central tenet of group membership is the preparation for a second Civil War or a revolution that will overthrow the U.S. government.

Shireen Mitchell is the founder of Stop Online Violence Against Women, which also runs a project called Stop Digital Voter Suppression. She was one of Fast Company’s Most Influential Women in Technology in 2010. This interview has been lightly edited for length and clarity.

Boigon: How are voter suppression and online violence against women related?

Mitchell: When we started tracking online violence and harassment of Black women specifically, and women of color in general, we were able to see and capture the data around accounts pretending to be Black women.

We were just like, why is this happening and why are the tech companies not participating in protecting Black women from these types of harassment?

We saw a pattern of coordinated targeted attacks on Black women that were very clear. That was the alarm bell for us.

A couple of years later, we realized how that transitioned into what we eventually came to see as Russian interference in the 2016 election, which was using the Black identity to suppress the vote.

​​​​Boigon: Why do you think foreign and domestic actors impersonate Black people and target Black voters in suppression efforts?

Mitchell: There’s no other group that’s been targeted more than African Americans. But in America, we know that people who get out the vote and, without fail, can change elections, are Black women.

Once we identified suppression efforts from 2013 going into 2016, we realized that this wasn’t going to stop. But what we also realized was that no one else was going to protect our voices except for us.

Our work is focused on Black women and how disinformation is using their identity, using Black identity, to weaponize digital voter suppression across the spectrum — to invalidate and discredit the Black voice, when you take on our caricatures and try to use that as the weapon.

Boigon: How else is the weaponization of Black identity online harmful?

Mitchell: Bad actors are using Black identity not only to suppress the Black vote, but also using it among other groups to incite anger. They were using us to gain trust from us, to later put in voter suppression content, but at the same time using that same content to basically anger other groups of people.

Mitchell: I want to know what the distinctions are, who the moderators are. How many of those are people of color who know what they’re looking at? They never answer that question.

All these things are happening that no one in these tech companies has ever been able to identify. They were not hiring black people who would know what any of that messaging meant.​​

The voting technology problems that could trigger panic at the polls

“The technological situation is especially fraught this year in Georgia, where Joe Biden narrowly led President Donald Trump in some recent polls. The state updated its electronic voting machines in 2019 and is using them in a presidential election for the first time.” Read more.

“The main page for the 2020 US election will be locked down so it can be edited only by people with accounts older than 30 days and who have more than 500 edits under their belt.” Read more.

“On Tuesday, an operations center with dozens of employees — what Facebook calls a ‘war room’ — will work to identify efforts to destabilize the election. The team, which will work virtually because of the coronavirus pandemic, has already been in action and is operating smoothly, Facebook said.” Read more.

The Forward’s coverage of disinformation and the election

We explored Iran’s use of fake Facebook pages to divide people over the Israeli-Palestinian conflict, wrote about a Georgia Senate race involving an antisemitic altered photo, and explained how campaigns can tell whether voters are Jewish or not. 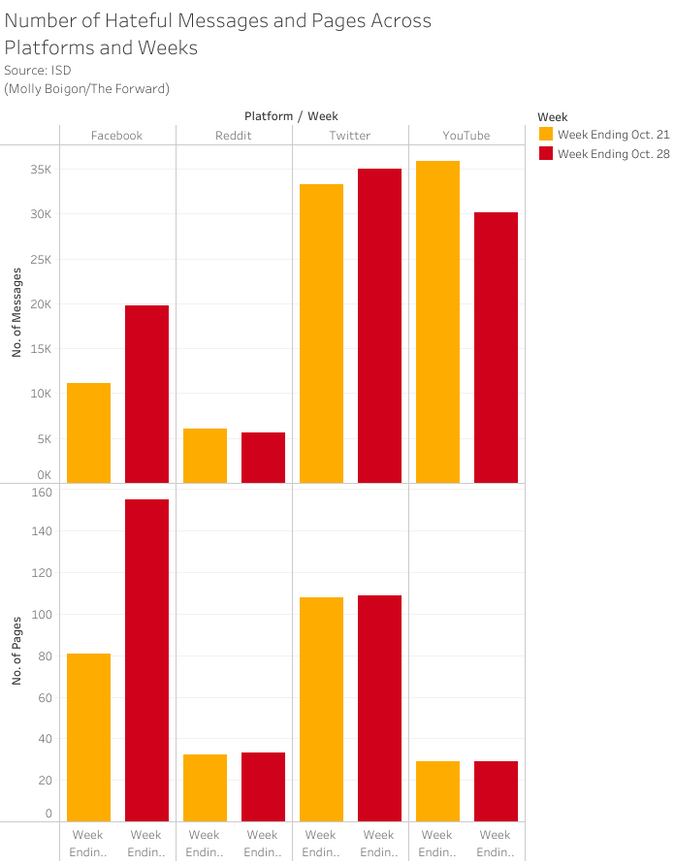 Thanks for reading this edition of FAHRENHEIT 411. Let us know what you think: boigon@forward.com.