Your Jewish guide to Election Day 2020 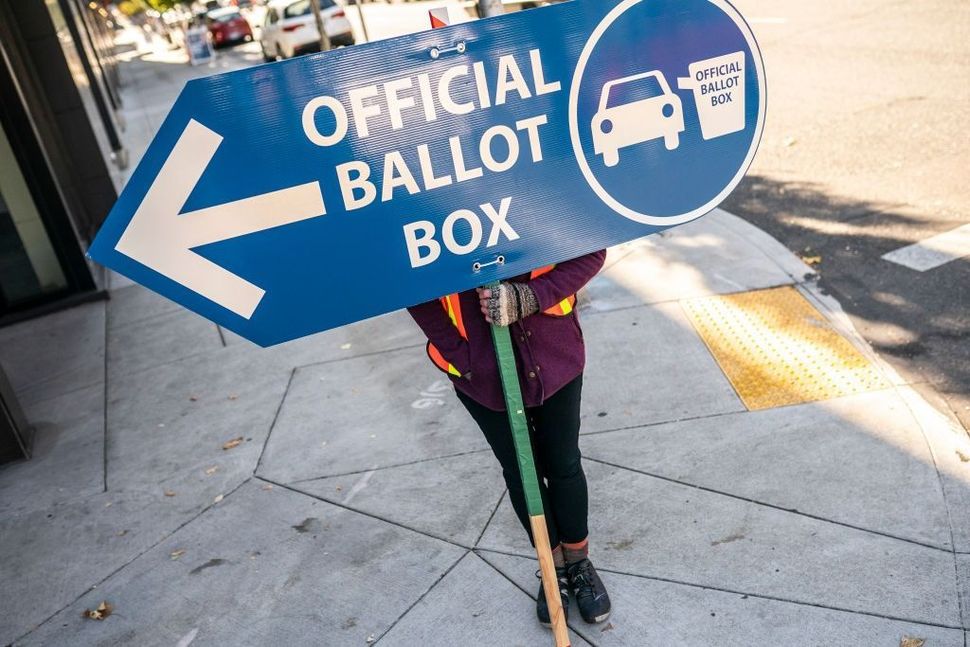 An election worker directs voters to a ballot drop off location on November 2, 2020 in Portland, Oregon. Image by Getty Images

All eyes are on the presidential race today, where Jewish voters in Pennsylvania and Florida could help determine whether the Republican President Donald Trump can win a second term or if the Democratic challenger, former Vice President Joe Biden, can convert on months of leading in the polls to oust him.

A Jewish lens on the race

Recent polls suggest that American Jews favor Biden over Trump by about 3 to 1, slightly more than supported Hillary Clinton against Trump in 2016. But as with the broader nation, the divide among the Jews feels starker after battles over antisemitism and the Israeli-Palestinian conflict.

Trump has rewarded single-issue pro-Israel voters — Jews and evangelical Christians — more than his predecessors, by recognizing Jerusalem as the capital of the Jewish state and moving the U.S. embassy there, among other things. Liberal Jewish groups blame Trump for the surge in white nationalism and violent antisemitism, while conservatives argue the real danger to American Jews comes from the left’s mounting criticism of Israel and the mainstreaming of political figures they accuse of antisemitism like Rep. Ilhan Omar and Linda Sarsour.

Progressive Jewish organizations have mobilized in unprecedented ways to defeat Trump — Bend the Arc said Monday that its volunteers had made more than 3 million phone calls and texts messages to Jewish voters. At the same time, many major Jewish donors remain loyal to the Republicans, and swaths of the Haredi community have become Trump stalwarts.

Where could Jewish voters tip the scales?

A total of more than 1 million Jews live in Florida and Pennsylvania, two swing states where the candidates have devoted copious time and money to win their 29 and 20 electoral votes. Biden victories in both states would all but foreclose Trump’s narrow path to victory. Jewish turnout, especially in Philadelphia and south Florida, could make the difference.

Jewish groups have been targeting Florida for months with dueling advertisements, mailers and voter outreach. “The three most important states for us are Florida, Florida and Florida,” said Matt Brooks, executive director of the Republican Jewish Coalition. Bend the Arc is working to turn out Biden voters and also hammer U.S. Rep. Matt Gaetz, a Republican from the Florida panhandle, for his association with a Holocaust denier and other unsavory characters.

IfNotNow, an activist group extremely critical of Israel’s occupation of the West Bank, had its members call their grandparents, hoping to nudge them to the left using a new phone banking technique. J Street, the liberal Zionist advocacy group, released an October poll showing a 51-point preference for Biden among Jewish voters in the Sunshine State. Still, Sybato’s Crystal Ball rates Florida as “lean Republican.”

Pennsylvania is more of a wild card. Polling and experts predict a slight Biden advantage overall, but much hinges on how turnout in Philadelphia (and the Main Line suburbs that are home to many Jews) compares to the turnout among rural white voters.

If it comes down to the wire, the courts may decide the outcome — Trump has already threatened to sue — and Pennsylvania’s Attorney General Josh Shapiro will be in court calling for ballots that arrive after Election Day to be counted. Shapiro, a Jewish Democrat, calls himself the “people’s lawyer” and is up for reelection himself.

U.S. Reps. Max Rose, Elaine Luria and Elissa Slotkin are three Jewish Democrats elected two years ago in districts Trump carried in 2016 — in Staten Island, N.Y.; Norfolk, Va.; and East Lansing, Mich. All three have largely maintained moderate politics without alienating progressives, and are slightly favored to hold their seats. Whether they do could be a harbinger for the broader results across the board.

Rep. Lee Zeldin of Long Island, N.Y., is one of only two Jewish Republicans in Congress, and he’s once again facing a Jewish opponent, Nancy Goroff, a professor of chemistry.

Zeldin beat Perry Gershon, a businessman, in 2018, a year when Democrats dominated elsewhere, but his district may have added liberal voters as New York City residents fled the city during the coronavirus pandemic. Zeldin has been a Republican Jewish standard bearer, cozying up to Trump while maintaining ties with mainstream Jewish organizations.

Madison Cawthorn is running for an open seat in what should be a safe Republican district in North Carolina, and is favored to win. But Cawthorn, who is facing Democrat Moe Davis, has flirted with white nationalism throughout the race. He posted photos from a “bucket list” trip to Adolf Hitler’s mountain retreat over the summer (while also referring to Hitler as evil) and his campaign created a website that claimed one of his opponent’s supporters was not loyal to white men.

In Georgia, Jon Ossoff, a Jewish media executive, is challenging Republican David Perdue in a special election for a U.S. Senate seat that has been one of the most expensive and closely watched in the country. Ossoff, who lost a close and highly symbolic House race in the state three years ago, would become the first Jewish senator to represent Georgia and just the fifth to represent a southern state.

This summer, the Perdue campaign deleted an advertisement in which an image of Ossoff had been altered to enlarge his nose. Video of Ossoff’s biting criticism of Perdue at their recent debate went viral. Perdue is slightly favored to win; an Ossoff victory could tip the Senate Majority to the Democrats.

Al Gross is a Jewish physician and former commercial fisherman running as an independent (but bankrolled by the Democratic Senatorial Campaign Committee) in Alaska, looking to knock-off incumbent Sen. Dan Sullivan, a Republican elected in 2014. Sullivan is likely to win but Gross has made it a competitive race and, c’mon, we have to keep eyes on the Jewish fishing doctor who has fought a bear.

Mike Siegal is a Jewish labor lawyer trying for the second cycle in a row to knock off Rep. Michael McCaul in the Houston district that McCaul, a Republican, has represented since 2005. Siegal is running as a Bernie Sanders-style populist and came within four points of McCaul in 2018. Siegal is being aided by IfNotNow and Jewish Voice for Peace, so if he were to eke out a victory, he would add a Jewish face to a leftist, critical-of-Israel contingent in the House that includes incumbents Omar and Alexandria Ocasio-Cortez of New York.

The Forward will be following these races and other Jewish angles on the election throughout Tuesday and Wednesday. Check for updates on forward.com and follow us on Twitter: @jdforward

Your Jewish guide to Election Day 2020