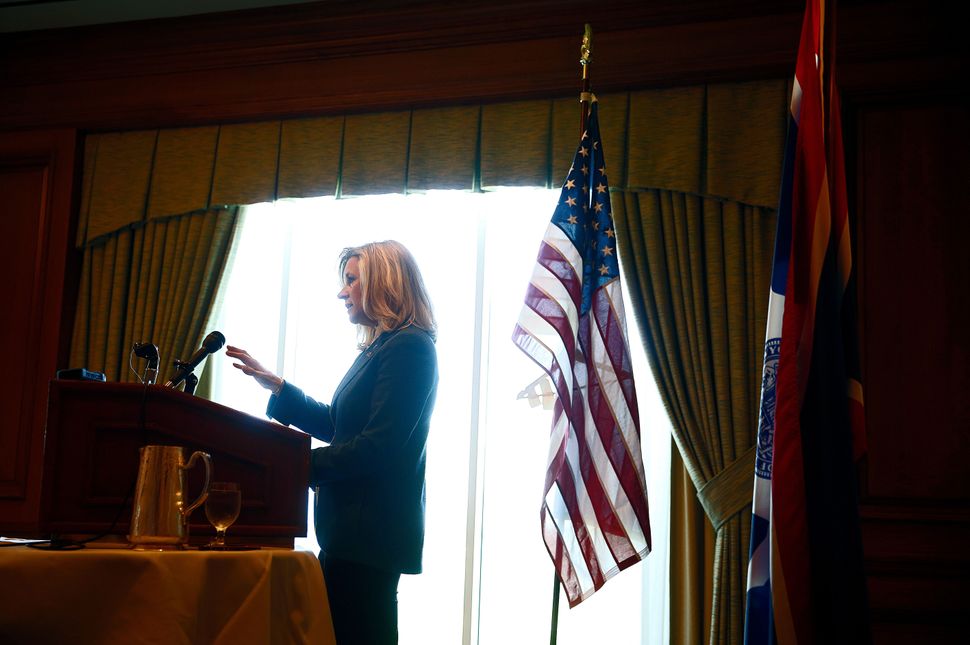 Liz Cheney answers a question from a reporter at a news conference in the Little America Hotel and Resort in Cheyenne, Wyoming in 2013. Image by Getty Images

After Liz Cheney became the first prominent Republican to announce her intention to vote for President Donald Trump’s impeachment Tuesday, many of her constituents lit up with anger. Emails poured into Wyoming lawmakers demanding the right to recall Cheney, the state’s lone representative in the U.S. House, where she also drew fire from her colleagues.

“She is not connected to the base and is voting for a hurtful lie,” Rep. Marjorie Taylor Greene, the newly-elected Georgia Republican who flirted with the antisemitic QAnon conspiracy theory during her campaign, fumed at Cheney on social media.

“It’s really hard for me to root for Liz Cheney. I’ll leave it at that.”

But as Trump’s presidency winds down and the battle between establishment conservatives like Cheney and fringe radicals like Taylor Greene, whose comments Cheney has called “offensive and bigoted,” spills onto the House floor, liberal Jews concerned about the Republican Party’s rightward drift have found themselves in a bind. Can they cheer for Liz Cheney — of all people — to keep the far-right at bay?

Cheney, of course, has unimpeachable conservative bonafides. The daughter of former Vice President Dick Cheney, she voted with President Trump 96% of the time until last week. As conference chair, she is the third-ranking Republican in the House, a position Greene and other GOP hardliners were calling on her to resign from after her vote.

Her support for impeachment put her on the left of Wyoming’s Congressional delegation, which includes Sen. Cynthia Lummis, who voted to challenge Pennsylvania’s electoral votes last week following the mob attack on the U.S. Capitol.

“She is — whether she meant to or not — aligning herself with the moderates in Wyoming versus the hardcore right-wing that has taken over the party,” said State Rep. Andy Schwartz, a Democrat who represents the resort town of Jackson Hole.

Schwartz, a rare Jewish elected official in the state, has watched with alarm as the legislature’s Republican supermajority has started considering bills they never did in the past: anti-abortion, pro-gun, pro-church, anti-government, is how he put it.

If Cheney wants to burn her political capital fighting Trump, he’s all for it. But that doesn’t make him a fan.

“It’s really hard for me to root for Liz Cheney,” Schwartz said. “I’ll leave it at that.” 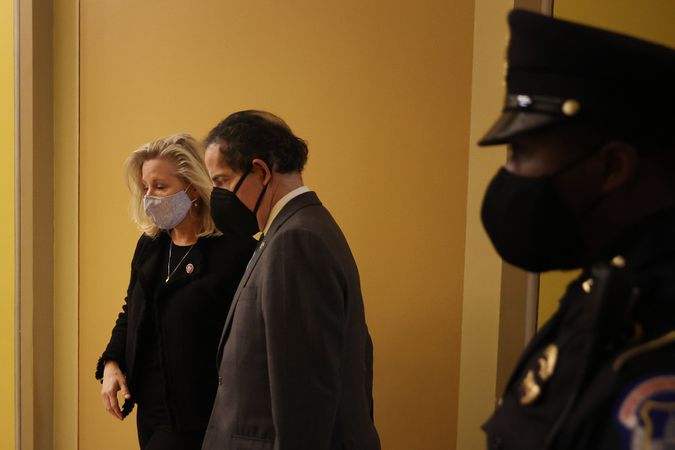 Rep. Jamie Raskin (D-MD) (C) talks with Rep. Liz Cheney (R-WY) following a vote by the House of Representatives at the U.S. Capitol on January 12, 2021 in Washington, DC. Image by Getty Images

The rallies that preceded the violent storming of the Capitol last Wednesday were ostensibly focused on false claims that Democrats stole the presidential election from Trump. But speakers occasionally veered into antisemitism, either intentionally as with the former Breitbart reporter who told a crowd that George Soros had bought off Supreme Court Chief Justice John Roberts, or in a more confused manner, as when Rep. Mary Miller, R-IL, favorably quoted Adolf Hitler in speech outside the Capitol before later clarifying that her comments were intended to condemn Nazism.

The mob that broke into the building and murdered one police officer while ransacking the Capitol included a who’s who of white supremacist leaders and others wearing antisemitic clothing and waving Nazi-adjacent banners.

The incident underscored how dangerous the far-right can be for minority groups.

“The modifier ‘far’ is a worrisome modifier and something we as Jews should be watching out for,” said Tevi Troy, a senior White House aide during the George W. Bush administration, who said he saw antisemitism on both extreme ends of the political spectrum.

“We got to get rid of the weak congresspeople, the ones that aren’t any good, the Liz Cheneys of the world.”

While the Capitol riot was roundly condemned by Republican members of Congress, many of them had actively fueled the misplaced anger around election fraud that led to the violence and had spent years stoking the flames of right-wing conspiracies over Jewish figures like Soros.

But Cheney rose to power while steering clear of most of these fringe notions. She’s helped lead Republican efforts to attack Reps. Ilhan Omar and Rashida Tlaib, perhaps the nation’s most prominent Muslim politicians, but doesn’t talk about Soros, as House Minority Leader Kevin McCarthy does, and she describes Democrats as socialists, but not cosmopolitan elites, the dog whistle term favored by Republican Sen. Josh Hawley, who has been widely accused of helping incite the Jan. 6 violence.

Cheney said QAnon was “dangerous lunacy” after Trump praised its followers and swiftly called former Rep. Steve King “racist” and said “he should find another line of work” after the Iowa Republican questioned why white supremacy was an offensive concept.

She also opposed overturning the results of the presidential election, leading Trump to tell a crowd outside the White House Wednesday morning that “We got to get rid of the weak congresspeople, the ones that aren’t any good, the Liz Cheneys of the world.”

Troy said it wasn’t useful to think of Cheney on a spectrum between moderate and conservative Republicans, but rather between those who are interested in governing and those who are not.

“Her family strongly believes in the governing approach,” said Troy, author of a book about political rivalries. “They believe in getting things done through government — that’s been a consistent throughline.”

In that interpretation, Cheney’s opposition to wild conspiracies and willingness to tamp down the most overt examples of bigotry isn’t about altruism, but realpolitik. It’s hard to win elections when GOP candidates praise rape, as King did, and white supremacy, and it’s hard to legislate when members of your caucus think a cabal of Satantic pedophiles is to blame for the world’s problems. 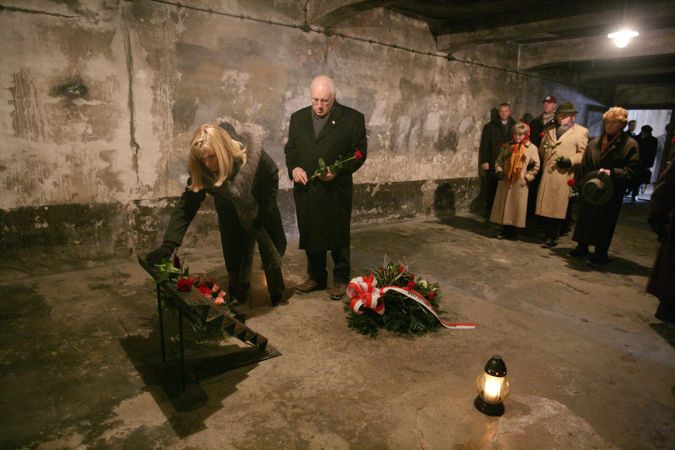 Vice President Dick Cheney and his daughter Liz Cheney (L) along with other members of a U.S. delegation, lay flowers at a memorial inside the first gas chamber at the Auschwitz-1 Nazi concentration camp January 28, 2005 near Krakow, Poland. Image by Getty Images

Her critics nonetheless appreciate these stands in the fight against creeping right-wing extremism.

“She has drawn some lines in the sand,” said Dove Kent, who oversees political strategy for Bend the Arc, a liberal Jewish group that has focused heavily on calling out white nationalism in the Republican party during the 2020 election.

Yet Kent’s appreciation is very limited. Yes, she said, it is better to break with the president now than not at all. But she also pointed to Cheney’s weaponization of antisemitism against Democrats over the last four years, including her refusal to vote for a House resolution condemning anti-Jewish bigotry because it was not targeted directly at Omar, whom Cheney has repeatedly accused of antisemitism.

“She has claimed the mantle of concern about antisemitism over and over, yet sided with folks who are a direct threat to our community,” Kent said. “She doesn’t get a medal.”

Cheney did not respond to an interview request for this article.

“The Jewish community has a stake in making sure neither one of America’s major political parties are controlled by violent extremists.”

Ira Stoll, a columnist for the conservative news website The Algemeiner, said there’s an added wrinkle to Cheney’s breaks with Trump and the Republican base: it’s not only to crack down on the far-right or uphold democratic norms. Stoll pointed to her defense of NATO and foreign interventionism, which he saw as more aligned with an elite Washington think tank crowd whose failures can likewise endanger minorities.

“When people aren’t getting health care or education because all the money is going to defense contractors, they start to distrust institutions,” said Stoll, who is a former managing editor at the Forward. “That’s when they can really turn on the Jews.”

Stoll added that Cheney was not alone among Republicans trying to break with Trump’s legacy and keep his more radical supporters at bay. But for the moment she is the most prominent, and he’s not turning away her assistance.

“The Jewish community has a stake in making sure neither one of America’s major political parties are controlled by violent extremists,” Stoll said. “If Liz Cheney thinks she can help with that, great!”

Arno Rosenfeld is a news reporter at the Forward. Follow him on Twitter @arnorosenfeldt or email [email protected]