Joe Biden’s rabbi and Mrs. Maisel’s are two of the 635 who have blessed Congress. Here’s what some had to say. 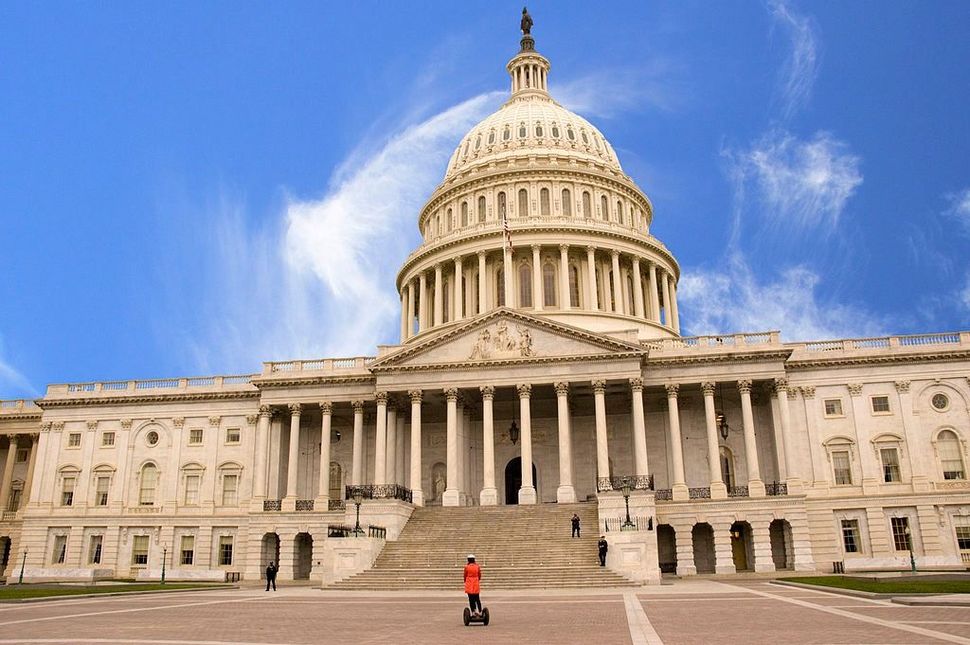 Two clergy members are slated to speak at President-elect Joe Biden’s inauguration ceremony next week: a priest, reflecting his Catholic faith, and an African Methodist Episcopal minister from his hometown, Wilmington, Delaware.

Not on the list: Rabbi Michael Beals, who Biden has called his rabbi — or any other rabbi.

This is not exactly a surprise. No rabbi has spoken at a Democatic president’s swearing-in since Lyndon B. Johnson in 1965. President Donald J. Trump did have one — Rabbi Michael Hier of the Simon Wiesenthal Center — at his inauguration in 2017.

Overall, nine rabbis have prayed at inaugurations since 1937. Two had also been guest chaplains in Congress: Rabbi Samuel Thurman, who blessed President Harry Truman’s 1949 swearing- in, had also blessed the Senate four years earlier, and Rabbi Hyman Schachtel, the Texan who blessed LBJ’s big day in 1965, had also prayed in the Senate in 1957.

Congressional sessions have opened with a prayer – even before the Pledge of Allegiance – since the beginning. The House and Senate each have official chaplains, but to protect the Constitutional prohibition of the establishment of a specific religion, clergy representing the nation’s diverse faiths are regularly invited as guests.

A total of 635 rabbis have prayed in Congress since 1860, according to research I have conducted over the last seven years for my new book “When Rabbis Bless Congress”. Since World War II, its been about seven or eight each year.

It is, perhaps appropriately, a small fraction of the Congressional guest chaplains overall. Between 2000 and 2015, according to a study by the Freedom from Religion Foundation, 2.7% of the guest chaplains were Jewish — about the same as the nation’s population — and 96.7% Christian (the study did not mention other religions).

The most recent, Rabbi Arnold Resnicoff, who blessed the House on Oct. 23, 2020, is a retired Navy chaplain who also holds the record for the most rabbinical prayers in Congress, 17. (It’s been nearly three years since the last rabbi opened a Senate session: Seth Frisch, now of The New Shul of Philadelphia, concluded his Feb. 27, 2018, prayer in Hebrew with the priestly benediction.)

Like Resnicoff, 55 rabbis who have prayed in Congress were or are military chaplains, and some showed up in uniform. Overall, the split by denomination of the 600-plus rabbis is about 35% Orthodox, 34% Reform and 30% Conservative. Fourteen of them were women, and 28 from the Lubavitcher sect of Hasidim, resulting in more mentions (17) of the late Lubavitcher grand rebbe, Menachem Mendel Schneerson, than of Moses (15).

Here are some other highlights from the annals of Congressional rabbinic appearances:

The Washington Hebrew Congregation, perhaps unsurprisingly given its age and location, has had more rabbis than any other synagogue bless Congress: 24, going back to 1876. The most recent, Rabbi Bruce Lustig, who on June 4, 2019, intoned: “Let not cynicism blight, nor faithlessness uproot our confidence to live as we pray, so that, unashamed, our leaders may transmit to generations to come an America better than ours.”

Washington Hebrew also has the distinction of the earliest rabbinic prayer available on video, back on June 4, 1985. You can see legendary Speaker Tip O’Neill introduce Rabbi Joshua Haberman.)

And from around the world

Born in Vienna, Austria, Haberman was among numerous immigrant rabbis, from 24 different countries, who have prayed in the literal heart of democracy.

Rabbi Gary Zola, executive director of the American Jewish Archives, recognized the centrality of the immigration story to the American Jewish experience when he opened the House on Sept. 21, 2004, marking the 350th anniversary of Jewish life in this country. 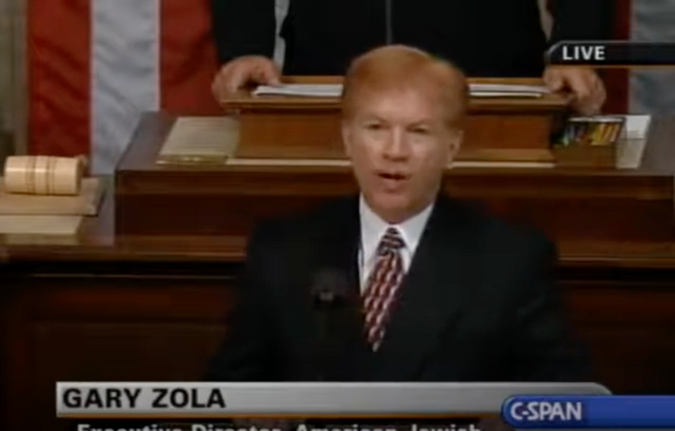 “May we all acknowledge our debt to America,,” Zola said, “to the courageous immigrants who gave us this national inheritance, and to the Source of All for endowing us with the benefit of our patriot’s dream, a Nation pledged to uphold the conviction that liberty and justice are for all.”

Rabbi Hannah Spiro of Hill Havurah in Washington, D.C, is the only woman to have given two Congressional blessings. Her first, on May 29, 2018, was the 613th Jewish prayer in the House or Senate, though she most likely did not know the significance of that being the same number as the commandments in the Torah.

Instead, she followed a common pattern, particularly among all those chaplains, of focusing on the military. “On this day after Memorial Day, remembering those who died in service,” Spiro said, “may the One who blessed our ancestors bless these souls in their service.”

Rabbi Ellen Wolintz-Fields, now executive director of the Women’s League for Conservative Judaism, was a guest chaplain on July 12, 2007. “This week in many communities, we conclude the reading of the Book of Numbers, the end of the desert journey of the Israelites,” Rabbi Wolintz-Fields told the House. “We learn from their example that life is a journey.”

Some guest chaplains have personal connections. On April 20, 1994, Sen. Russ Feingold, Democrat of Wisconsin, introduced his sister, Rabbi Dena Feingold of Beth Hillel Temple in Kenosha, Wisconsin, who said: “As these elected officials begin another day of deliberation in the U.S. Senate, we pray that Your presence may dwell among them.”

Rabbi Beals has gotten a lot of air time lately because of his close encounter with Biden back in 2006, when Biden was a Senator from Delaware and showed up at a shiva for a woman who had donated $18 to each of his political campaigns.

Beals, of Congregation Beth Shalom in Biden’s hometown of Wilmington, spoke (virtually) at the Democratic National Convention, and was included in the Forward 50 list of remarkable American Jews for 2020. 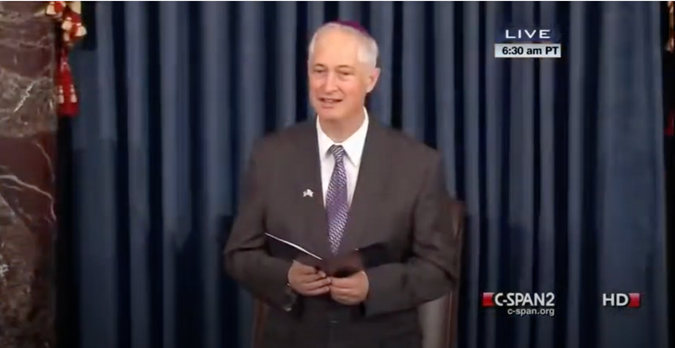 “Help these Senators, Your humble servants, find a way of working together for the common good,” Beals said. “In doing so, may they thus take their individual holy inner lights and join them together, creating one unified shaft of light so strong that it will shine clear up to the firmament above.“

All these prayers, like all action on the floor of the House and Senate, were broadcast live on C-SPAN, where I have been communications director since 2009.

Rabbi Mark Getman, who prayed in Congress in July, 2019, is the only guest chaplain I’m aware of who has appeared both on C-SPAN and on Amazon Prime Video, where he played the rabbi in several episodes of “The Marvelous Mrs. Maisel.”

Georgia on my mind

Hours after the Rev. Raphael Warnock and Jon Ossoff made history last week as the first Jewish and first Black Georgians elected to the United States Senate, Warnock invoked one of our most famous rabbis. He quoted Abraham Joshua Heschel’s famous line about feeling like his “legs were praying” when he marched with the Rev. Dr. Martin Luther King Jr., and imagined that the two civil-rights leaders “are smiling in this moment.”

Rabbi Amy Rader, then the rabbi of B’nai Torah Congregation in Boca Raton, Florida, used the same phrase to open a 2006 session at the House of Representatives: “Esteemed men and women in this Chamber,” she said, “I ask for God’s help to move our prayers from our lips to our feet.’”

Speaking of Georgia: rabbis from synagogues there have opened Congress in prayer seven times between 1958 to 1999, which ranks it 18th among the states and Washington. (The top three — New York, Washington, Pennsylvania — total to 288).

So Georgia is due for another visit. I nominate Rabbi Larry Sernovitz, who in 2019, when he was with a New Jersey congregation, Nafshenu, asked God to “guide these courageous individuals to create holy space where healthy debate is encouraged, and the dignity and autonomy of human beings is respected and loved.”

Sernovitz has since become senior rabbi at Temple Kol Emeth in Marietta, a city northwest of Atlanta. Rep. Lucy McBath, the Democrat who represents the area, welcomed him last month with apt words for what lay ahead for the 117th Congress.

“‘Tikkun olam’ translated to ‘repair of the world,’” she said, “and I know that, together, our community in Georgia will help build bridges to a better and more just tomorrow.”

Howard Mortman is the communications director at C-SPAN and author of the new book “When Rabbis Bless Congress: The Great American Story of Jewish Prayers on Capitol Hill.”

Joe Biden’s rabbi and Mrs. Maisel’s are two of the 635 who have blessed Congress. Here’s what some had to say.