Lagedi — The monument below, known as the Monument of Lihula, glorifies Estonian WWII soldiers, which includes Estonian units in the Waffen-SS (the military wing of the Nazi party).

The monument depicts a soldier in a German helmet (note similarity to the Estonian SS recruitment poster on left). See report by the BBC and press release from the Simon Wiesenthal Center. 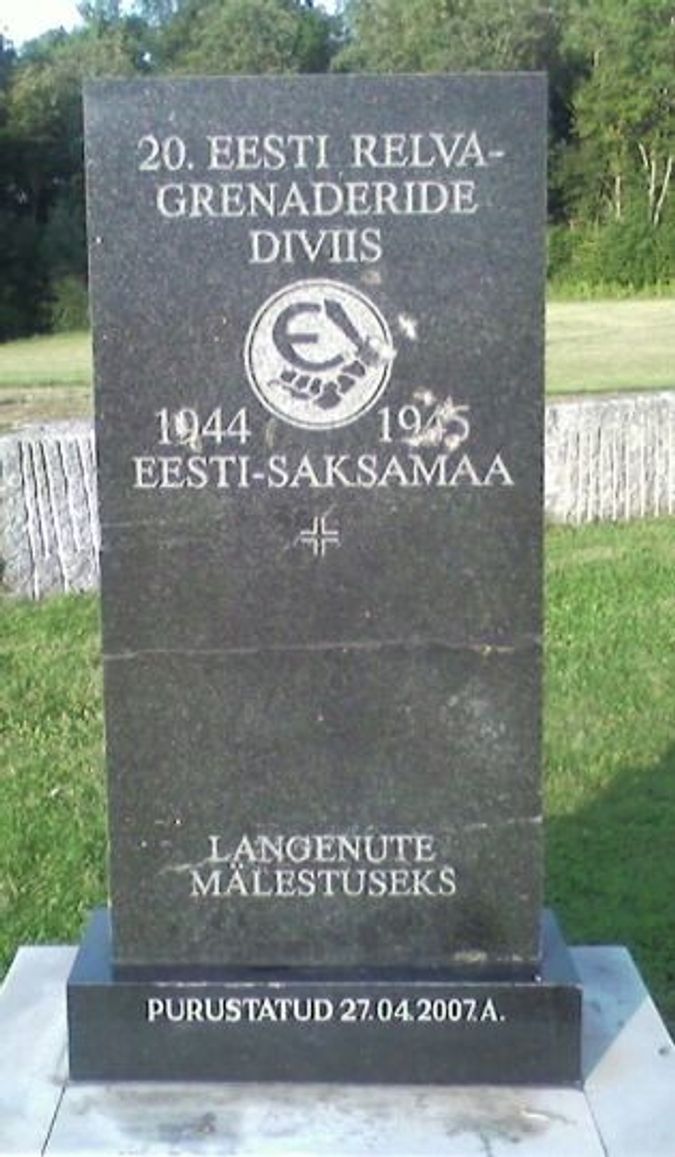 Sinimäed Hills — A cross and several memorial stones honor several Waffen-SS divisions which fought there in 1944. This includes the 20th Waffen Grenadier Division of the SS (1st Estonian), whose insignia is on one of the stones, left.

The monument, erected in 1999, has become the site of annual gatherings to honor the SS. (See report in the Jerusalem Post ). Due to the participation of local collaborators, Estonia’s Jewish population was virtually eradicated within months of Germany invading the country in 1941.

The two other memorial stones in the main Sinimäed Hills complex honor the 5.SS-Freiwilligen-Sturmbrigade “Wallonien” aka the Walloon Legion (French-speaking volunteers from Belgium) and Dutch soldiers, nurses and auxiliaries who volunteered to fight against the USSR.

Close to the main complex is another set of three memorial stones (below left) which honor Flemish volunteers (Dutch-speaking soldiers from Belgium), Regiment “Danmark” (SS-Panzergrenadier-Regiment 24 Danmark – Danish SS volunteers) and Regiment “Norge” (SS-Panzergrenadier-Regiment 23 “Norge” – Norwegian SS volunteers). Nearby is a single memorial stone dedicated to III (Germanic) SS-Panzerkorps, the larger military unit comprised, in part, of the Scandinavian, Dutch and Belgian volunteer formations honored by the other stones. Below right, a recruitment post for Estonian SS volunteers, September 1942. (Thanks to Kevin Prenger and Kaj Metz of Traces of War for information on the monument complex.)

Laupa — In 2016, this town’s school unveiled a bust of Harald Nugiseks (1921–2014), SS-Oberscharführer in the 20th Waffen-SS Division and a recipient of the Knight’s Cross of the Iron Cross, Nazi Germany’s highest military honor. The bust is shown in the coverage by ERR, Estonia’s public broadcasting outlet (Google translation here).

The ERR article describes Nugiseks as an SS veteran and a recipient of the Knight’s Cross of the Iron Cross in the same way an American article would introduce a decorated U.S. Army veteran. Above right, supporters of Estonia’s far-right EKRE party, which made major gains in 2019 elections, in a torchlight march, February 2020.

Mustla and Viljandi — In 2018, Mustla installed this plaque glorifying SS-Standartenführer Alfons Rebane (1906–1976), a commander in the 20th Waffen-SS Division who, like Nugiseks, was awarded the Knight’s Cross of the Iron Cross (see entry above). Rebane has another plaque in Viljandi. See reports in the JTA, ERR.

After the war, Rebane, like many Nazi collaborators, fled to the West and served in the British intelligence (MI6). Western governments welcomed thousands of Eastern European Nazi collaborators who became assets in the Cold War. See the introduction section for more information.

Below left is a photo of Estonian SS fighters, June 1944. Below right are three Estonian Knight’s Cross recipients, with Rebane on the left and Nugiseks in the center.

For more on Estonia’s monuments to the Waffen-SS, see Defending History’s Estonia page.