Germany, long seen as an international model for appropriately reckoning with its Holocaust history, nonetheless currently has at least 162 streets and schools named for Nazis and their collaborators, a Forward investigation has found.

These public honorings of people who committed horrific atrocities during World War II persist despite Germany’s strict laws against displaying Nazi flags or other symbols, and even though many of its major cities have over the past two decades commissioned reports aimed at rooting out inappropriate honorings of Nazi Party members and others with racist or antisemitic pasts. Most are in the former West Germany.

The Forward has documented each of these streets and schools as part of an ongoing effort to publicly list all statues, monuments and other public showcasing of Nazis and their collaborators around the world. For International Holocaust Remembrance Day 2021, we published our initial investigation, which included 320 such monuments in 16 countries on three continents.

After another year of reporting, we have added an additional 1,135 items to the list, bringing the total to 1,455 in 25 countries, including the United States and five Western European nations. The updated list includes 11 more Nazi monuments in seven U.S. states -– Alabama, Florida, New Jersey, New York, Pennsylvania, Virginia and Wisconsin — bringing the total in our own country to 26.

In response to the original article, local officials in one Belgian town voted in December to remove its memorial amid international pressure. Our investigation also prompted discussion of the issue in places as different as Wisconsin and Azerbaijan.

The local government in Zedelgem, Belgium, decided to remove from its town square a 2018 sculpture honoring Latvian collaborators with the Nazis, despite vociferous defense of the monument from Latvia’s foreign minister and undersecretary of state.

To jump directly to our latest country-by-country list of memorials to Nazi perpetrators and collaborators click here.

Outside of Belgium, most of the original investigation focused on Eastern Europe, where Holocaust revisionism – often accompanied by neo-Nazi rallies – is the most blatant. But reporting over the last year reveals that even in Germany and Austria, countries generally respected for their postwar acknowledgement of and education around Nazi atrocities, Holocaust distortion is rife.

Germany has for six decades instituted far-reaching measures to confront the horrors of the Holocaust. School curriculums address the fraught history and often include field trips to concentration camps. The government has allocated some $100 billion in reparations to survivors and their descendants. Holocaust denial is illegal. But in the past 25 years, numerous German cities and towns large and small have newly named schools and streets for prominent Nazis.

For example, at least seven public and private institutions – a graduate institute in one university, a college in another, a performance hall, a nursing home, a hospital, a street and a school – have all been named for Alfried Krupp, the industrialist found guilty of war crimes in 1948.

Krupp was convicted of using forced labor from prisoners of war and concentration camp inmates; estimates vary about how many prisoners he worked to death, but the scope of his atrocities required a separate tribunal at Nuremberg.

Krupp was released from prison in 1952; after his death in 1967, the foundation he had established began funneling money into charitable causes and public works, focusing on science and education. In 2001, the foundation gave 10 million Deutsche Marks – the equivalent of about $7.6 million in today’s U.S. currency – to what is now Jacobs University Bremen to build its first residential college, named for Krupp.

And he is hardly the only Nazi collaborator whose name is showcased publicly in today’s Germany.

There are also streets named for Friedrich Flick, whose steel empire was built on the expropriation of Jewish businesses; Max Ilgner, an executive for IG Farben which produced the Zyklon B gas for the Auschwitz gas chambers; Albert Reinmann Jr., whose plants abused prisoners to the point where even the local Nazi Party office had to step in; and Ferdinand Sauerbruch, who headed the medicine branch of the Third Reich office responsible for authorizing horrific experiments on concentration camp inmates.

Such street names persist despite the fact that local governments in most large German and Austrian cities have, over the last two decades, enlisted panels of historians and other experts and collected pages of evidence to root out such public honorings.

Sometimes, a city will add a disclosure plaque to acknowledge the honoree’s history. In 2016, for example, Vienna added a sign to its Ferdinand Porsche Street that says: “The problems in his biography are his membership in the NSDAP and SS” – referring to the Nazi Party and its paramilitary arm – “the employment of forced laborers and his work in the Nazi armaments industry.”

Overall, the Forward has counted 178 statues, monuments, streets or other ways of memorializing Nazi collaborators across Germany and Austria, as well as 112 such items in four other Western European nations: Italy, Spain, Belgium and the United Kingdom. We have also found 25 additional monuments to German, Ukrainian and Belarusian collaborators in Alabama, Florida, New Jersey, New York, Pennsylvania, Virginia and Wisconsin, bringing the total known in the United States to 37. 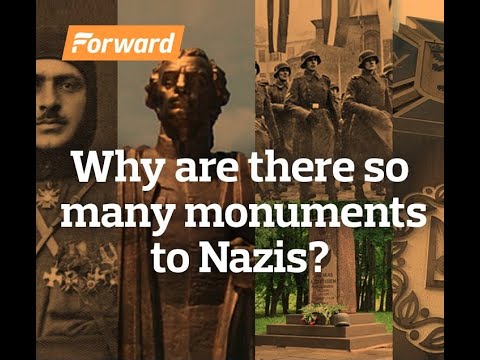 Some of these cases involved the federal government. NASA’s Kennedy Space Center on Merritt Island, Florida, for example, has a conference facility named for Dr. Kurt H. Debus, a Nazi scientist who was brought to the United States after World War II.

Debus was a committed Nazi who wore his SS uniform to work; his V-2 rockets were built by slaves who lived and labored in underground tunnels.

In February 2021, after lobbying by its own employees, NASA removed a bust of another Nazi scientist, Wernher von Braun, the lead engineer in developing the Third Reich’s rocket technology who, after the war, worked for the United States Army and then NASA itself.

The U.S. Space & Rocket Center, an affiliate of the Smithsonian Institution, also just this week removed its own bust of von Braun, days after inquiries about it from the Forward. But the center still has a large display on its wall with a von Braun quote: “The rocket will free man from his remaining chains, the chains of gravity, which still tie him to this planet. It will open him to the gates of heaven.”

Von Braun, like Debus, was among some 1,600 German scientists, engineers and technicians brought to the U.S. after the war as part of a secret intelligence program called Operation Paperclip. He received the National Medal of Science in 1975 and was inducted into the National Academy of Engineering in 1967.

Von Braun’s name still adorns a research hall in the University of Alabama in Huntsville, a public institution, as well as an entertainment complex owned by that city, where he helped develop the Apollo moon program.

The Forward compiled its list of Nazi-connected monuments using criteria you can find detailed here. It was not enough for the person to have been an antisemite or even a Nazi Party member – otherwise, Germany alone would have had several hundred more entries. Instead, we only included individuals and organizations who had a direct link to aiding the Third Reich or enabling the Holocaust.

Some, like Spain’s Blue Legion, fought for Germany; others, like the Ukrainian local auxiliary police, massacred Jews. The list includes a Russian Cossack general, an Italian war criminal who served in Mussolini’s Nazi puppet republic, Flemish and Ukrainian clerics who recruited thousands of men for the SS, and more.

Today, as antisemitism continues to surge worldwide, and Holocaust memory fades, the Forward’s ongoing investigation attempts to fully document all public recognition of Nazi collaborators. You can find our list below.

If you know of examples not included in our list, email [email protected], subject line: Nazi monuments.

Lev Golinkin is the author of A Backpack, a Bear, and Eight Crates of Vodka, Amazon’s Debut of the Month, a Barnes & Noble Discover Great New Writers program selection, and winner of the Premio Salerno Libro d’Europa. A graduate of Boston College, Golinkin came to the U.S. as a child refugee from the eastern Ukrainian city of Kharkov (now called Kharkiv) in 1990. His writing on the Ukraine crisis, Russia, the far right, and immigrant and refugee identity has appeared in The New York Times, The Washington Post, the Los Angeles Times, CNN, NBC, The Boston Globe, Politico Europe, and Time.com, among others; he has been interviewed by MSNBC, NPR, ABC Radio, WSJ Live and HuffPost Live.