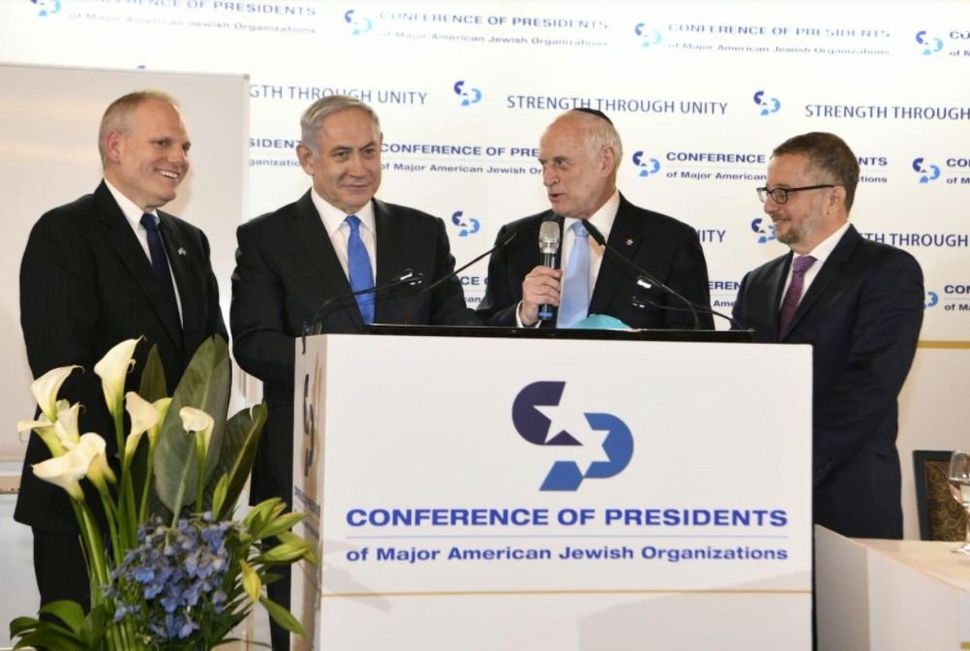 Israeli Prime Minister Benjamin Netanyahu with leaders of the Conference of Presidents in Jerusalem. Courtesy of facebook

The Conference of Presidents of Major Jewish American Organizations is planning to host Zoom calls in the coming weeks where the leading candidates for prime minister in Israel’s March 23 elections will speak directly to the top leaders of the group’s 53 member organizations.

Prime Minister Benjamin Netanyahu has yet to accept the invitation, a person familiar with the planning said in an interview Monday night. But his major rivals have agreed to meet with the group, which includes representatives from a range of major establishment Jewish organizations.

The Israeli candidates who have agreed to appear include Yair Lapid, the current leader of the opposition and the centrist Yesh Atid party; Gideon Sa’ar, the former Likud colleague of Netanyahu who has formed a new party to challenge him; Naftali Bennett, another challenger from Netanyahu’s right flank whose base is in West Bank settlements; and Merav Michaeli, the newly-elected Labor chairwoman.

The webinars will each include an opening statement by the politician followed by an open question and answer period, and have been scheduled in place of the umbrella group’s usual February mission to Israel. In both of the past two years, the annual mission took place weeks before an Israeli election, and the delegations heard from all the major party leaders in Jerusalem. The March election is Israel’s fourth in less than two years, as Netanyahu has struggled to maintain a stable governing coalition.

Bennett, who is focusing his campaign on criticizing Netanyahu’s handling of the coronavirus pandemic is scheduled to kick off the series of virtual calls on Tuesday at noon. Sa’ar is slated to address the group the following week, on Feb 18.

“American Jewry and Israel have a symbiotic relationship — we need each other to survive and thrive,” said William Daroff, the conference’s CEO. “The Conference of Presidents will continue to facilitate and lead the discussions with Israel’s political leadership, as we have for over seven decades.”

Daroff said the issues expected to be discussed include “combating global antisemitism, preventing Iran from developing a nuclear capacity, and maintaining the strong bond that exists between our two countries.”

The sessions are only open to the representatives of each group that sits on the Conference of Presidents board, Daroff said.