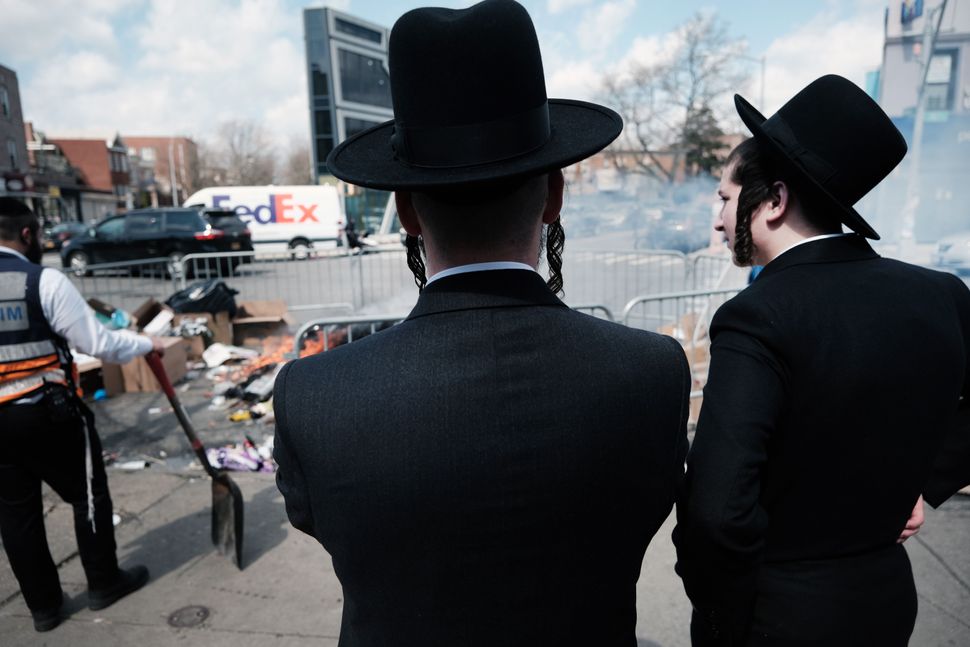 Orthodox Jews in the Borough Park neighborhood of Brooklyn patriciate in the annual Passover tradition of burning bread before the start of the holiday on March 26, 2021 in New York City. Photo by Spencer Platt/Getty Images

Borough Park, the Orthodox enclave in Brooklyn that was an early hotspot for COVID-19 cases and deaths last year, now has the lowest portion of fully vaccinated people of any New York City neighborhood, according to newly released public-health data.

Less than 11% of the neighborhood’s population is fully vaccinated, per the city’s health department data published on Monday. That is half the citywide rate of 22%.

Borough Park’s relatively young population may be part of the reason: the neighborhood has more than twice the portion of children under age 5 as the citywide average, and a lower proportion of people over 50; the vaccine, meanwhile, only recently became available to people under 50 in New York, and children under 16 remain ineligible. The city did not provide neighborhood-level data for those over 50, but when looking at only people ages 18 and above, Borough Park ranks third from the bottom — ahead of only Corona/North Corona, Queens and Hunts Point in the Bronx — for full vaccination, and 17th of the city’s nearly 180 neighborhoods for adults who have had at least one dose.

Beyond demographic differences, experts say that it is a persistent belief in herd immunity and skepticism about the safety of the vaccine — both fueled by rampant misinformation spread via WhatsApp, flyers and robocalls — has left Borough Park trailing the rest of the city in inoculations.

“When the common language, the vernacular, is not a scientific one, it’s really easy for such misinformation to proliferate,” Meyer Labin, a Yiddish writer and Hasidic Jew who grew up in Brooklyn, observed in an interview. “It’s such a tight-knit community where everyone knows everyone, and so the side effects of the vaccine are very real. You know — ‘My sister’s neighbor’s best friend got really sick after the vaccine.’”

The city’s health department did not respond to a request for comment about the city’s outreach to Borough Park or challenges in reaching the city’s Haredi Jews.

The skepticism has taken root despite — or perhaps because of — the fact that Borough Park was particularly hard hit by the coronavirus last spring and summer, with the constant wail of ambulance sirens becoming a community soundtrack, and hospitals, morgues and religious burial societies overwhelmed by illness and death. From March 2020 through September 2020, Borough Park’s ZIP code, 11219, had the highest death rate in the city and the second-highest hospitalization rate behind Breezy Point, Queens, according to city data.

But the neighborhood was also a place that resisted social-distancing rules, with some synagogues and schools staying open illegally, and street protests last fall that led to violence.

Now, as the vaccination campaigns have picked up across the city and country in recent weeks, robocalls, flyers in synagogues and yeshivas, and messages on social-media platforms like WhatsApp have spread rumors about the safety of the vaccine and the severity of its side effects, despite the efforts by some rabbis and political leaders in the community to calm the public.

Of particular staying power is the baseless claim that the vaccine either accidentally causes infertility, or that it’s an intentional ploy designed by Bill Gates to reduce the world’s population. In fact, mRNA vaccines have been found to protect pregnant and lactating women and their newborns from the virus.

Dr. Vladimir Zelenko, the Hasidic doctor behind the unsupported use of the antimalarial drug hydroxychloroquine to treat coronavirus, told an Israeli Haredi rabbi earlier this year that the vaccine “may inhibit fertility for young girls.” One employee at an Orthodox fertility clinic in Brooklyn, speaking on the condition of anonymity, said the clinic has gotten nonstop calls inquiring about the vaccine’s safety.

Haredi families typically have many children, and many view having them as a religious obligation based on the Biblical commandment to be “fruitful and multiply,” and part of a collective responsibility to expand the Jewish community after the devastating losses of the Holocaust.

On Tuesday, as Israel announced that it would allow more tourism starting in May, but only for those who can prove they have been vaccinated, the news was not well received in one WhatsApp chat for conservative Haredi Jews.

“File a lawsuit!” said one user.

“Very sad and tragic,” said another.

Already conservative in their social outlook, Haredi Jews increasingly aligned more with Republican politics during the Trump years, and many listen to right-wing talk radio and are exposed to far-right groups and pages on Facebook, if they use social media.

The community was also targeted by the anti-vaccine movement in 2018 and 2019 during the measles outbreak. Activists including Del Bigtree, who leads the anti-vaccine group Informed Consent Action Network, appeared at anti-vaccine symposiums in Borough Park and compared quarantining children with measles to Jews targeted by Nazi Germany.

Avi Shafran, the director of public affairs at the Orthodox advocacy group Agudath Israel, said he thinks that there are “larger factors” than misinformation contributing to low vaccination rates in Borough Park.

“There is an assumption (right or not) that something close to herd immunity has been reached in the community,” Shafran, who occasionally writes for the Forward, said in an email interview. Borough Park and other Haredi neighborhoods “are interpreting the currently comparatively low hospitalization rates in their neighborhoods as confirming the idea that most people have antibodies and are protected even without vaccination.”

An author of a research paper published last month about coronavirus in Haredi communities told the Jewish Telegraph Agency that “no value in the paper approaches herd immunity.”

Meanwhile, one robocall circulating in the community warns not only of infertility supposedly caused by the vaccine, but also of heart attacks, “aneurysm, stroke, hemorrhage, paralysis, seizures, psychosis, anxiety, cognitive problems, digestive disorders” and a laundry list of other problems.

One petition circulating in the community asks parents to sign if they are opposed to distributing vaccines to children in schools.

And on WhatsApp Tuesday morning, users were sharing a video of a woman counting funeral and shiva notices in her inbox, as she said she had more to attend now than she did during the entirety of 2020, suggesting those deaths were caused by the vaccine.

“Why is no one freaking out about the overwhelming number of deaths?” she asked.