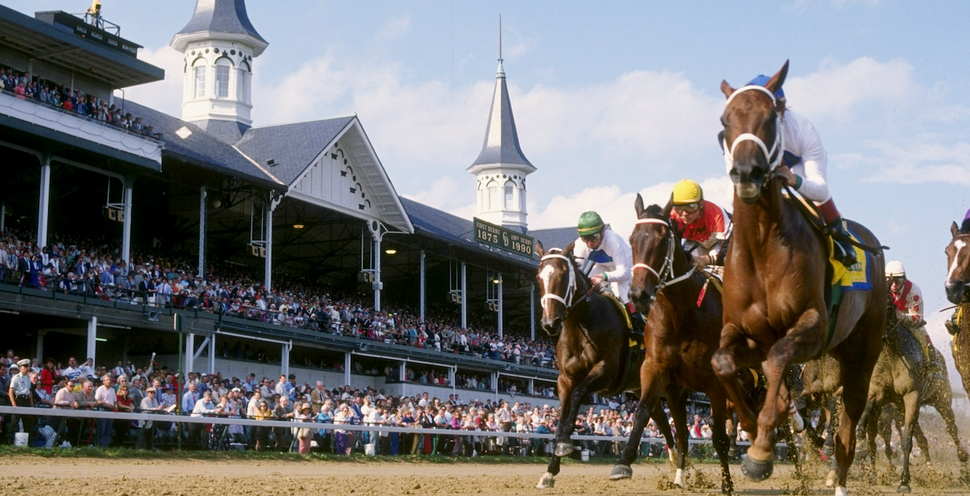 (JTA) – The odds are long that David Cohen can become the first Jewish jockey to win a Kentucky Derby.

Cohen’s horse, Keepmeinmind, is a 50-1 shot in the early line for Saturday’s Triple Crown race at Churchill Downs in Louisville.

But don’t bet against the 36-year-old rider, who has won some 1,560 races and earned nearly $60 million in a career that launched in 2004: His is a story of comeback, from physical injury and mental anguish.

An Arkansas rabbi helped along the way.

Cohen was raised in the horse racing industry: His father was a highly regarded owner and breeder in California, where Cohen was born and raised and had his bar mitzvah. He was enjoying a promising career, moving east to win jockey titles at then-Philadelphia Park and Delaware Park in the mid-2000s.

Cohen then made his way north to the prestigious New York racing circuit in the 2010s.

At Aqueduct in 2014, he was about to saddle up in the paddock when his horse reared and kicked, striking Cohen. The wayward horse broke the tibia and fibula in Cohen’s right leg, resulting in major surgery that would send the jockey to the sidelines for more than three years.

Only part of the issue was his physical condition.

“My father passed away, who I was very close with, best friends, very shortly after I was injured,” Cohen said. “Within a year my sister passed away. I took a lot of the time healing properly, not just physically, but mentally and spiritually as well.”

Cohen would say it was a “hit-the-pause button.”

He and his agent mapped out a plan for where that return should be: Oaklawn Park in Hot Springs, Arkansas.

“I really was blessed. My return year was my best year in my career,” Cohen said. “I was named Comeback Jockey of the Year, and in 2019 I was the champion jockey at Oaklawn.”

While Cohen had enjoyed plenty of support from the Jewish community while racing in New York, it was in Arkansas where he met a rabbi from Little Rock. (Don’t ask his name, Cohen just calls him Rabbi.)

“It was pretty cool. He sought me out,” Cohen recalled. “He came to Oaklawn one day and was a fan, and wanted to bless me and say a prayer with me. We just bonded ever since.

“I do events with him for local businesses and people that are entrepreneurs, and anything that I can to be able to give back to the community.”

Oaklawn’s meet usually runs from January through April, so Cohen has been to the rabbi’s home, including for Passover seders.

Amid his healing process, is it possible that fate drew Cohen to Arkansas, where he would meet a rabbi who would connect him to the Jewish community there?

Looking at Saturday’s race, Cohen might need some divine intervention to finish in the money in a 20-horse field.

Keepmeinmind has yet to return to his form as a 2-year-old, when he finished third in the Breeders Cup Juvenile, which crowns the 2-year-old champion and early Kentucky Derby favorite. (The winner, Essential Quality, is currently listed as the Derby favorite.) 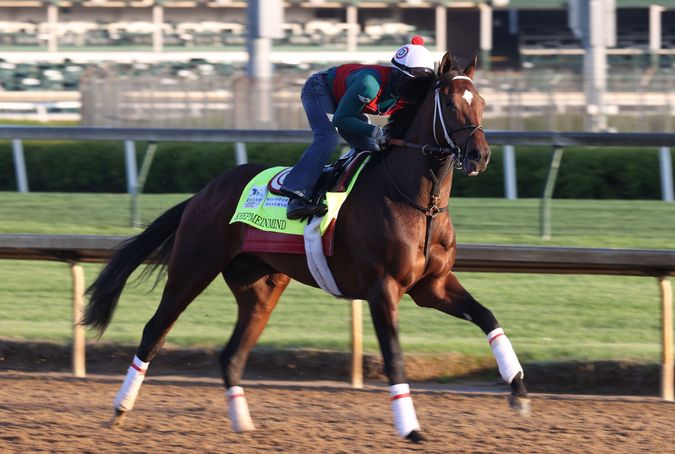 Keepmeinmind runs on the track during training for the Kentucky Derby at Churchill Downs. Photo by Andy Lyons / Getty Images

On Nov. 28, Keepmeinmind scored his only victory in six starts, in the Kentucky Jockey Club Stakes at Churchill Downs, stamping him as a Derby contender. But he’s been back in the pack in two starts this year.

Cohen, the first Jewish jockey to have a Derby mount since Hall of Famer Walter Blum rode the 28-1 shot Royal and Regal to an eighth-place finish behind the legendary Secretariat in 1973, points to at least one plus: His horse knows the track well. He also finished a close second there in his racing debut in September.

“It’s a huge advantage,” he said. “You already know the horse can handle the surface, likes the track, likes the atmosphere.”

Cohen adds: “If he does what we think he will, I wouldn’t be surprised not only if he doesn’t just finish in the money, but that he does end up winning the race.”

No Jewish jockey appears to have ever won the Kentucky Derby, though a number of Jewish papers in the 1930s and ’40s listed Ira Hanford as being Jewish. As an 18-year-old apprentice, Hanford rode Bold Venture to a win in the 1936 Derby for his Jewish trainer and owner, Max Hirsch and Morton Schwartz, respectively. (When the then-Ocala, Florida, resident died in 2009, the Ocala Star Banner wrote in his obituary that Hanford was Roman Catholic.)

Blum, who rode Reason to Hail to a fourth-place finish in the 1967 Derby, remains the only Jewish jockey to win the Belmont Stakes. His 1971 victory aboard Pass Catcher prevented Canonero II from winning the Triple Crown.

The only Jewish jockeys to win the Preakness, the second leg of the Triple Crown, were Walter Miller in 1906, aboard Whimsical, and Willie Harmatz on Royal Orbit in 1959.

Cohen grew up around jockeys. His father’s trade was his entrée into horse racing.

“I was going to college for equine therapy and wanted to transfer that to either bloodstock agent or becoming a trainer, and before doing so, started from the ground up, hot walking them, grooming, learning all the feed, the medication,” he said.

Eventually he would race against men who had known him since he was little. Cohen said he was always confident he could handle competing against them.

“It’s funny because a lot of these guys I grew up with, shaking hands in the paddock and watching them ride my father’s horses,” he said. “One thing that probably helped more so than anything was that I was always involved in sports. I was in the Junior Olympics for speed skating, for hockey. An all-star baseball player.

“For me, competition’s in my blood and nothing new to me, so at no point was it intimidating. If anything, it was inspiring. Any real champion would tell you that they look for that competition because it brings out the best in you.”

While apprenticing at the Del Mar racetrack in Southern California, Cohen had a chance to meet a few retired Jewish jockeys.

“They have a get-together every year of the Jewish jockeys — Bill Harmatz, Walter Blum, a few others. I met them very early on in my career. I was always an athlete growing up and did every sport, so for me being Jewish and being an athlete didn’t really seem so rare. But when it comes to being a jockey, obviously I’ve learned how rare it is and how special it is.”

What would it mean for Cohen to win the Run for the Roses?

“It would mean the world,” he said. “And then to put on top of that also being the first Jewish jockey, that would just be an honor in itself.”

The post David Cohen is a longshot to become the 1st Jewish jockey to win the Kentucky Derby. But he’s beaten long odds before. appeared first on Jewish Telegraphic Agency.