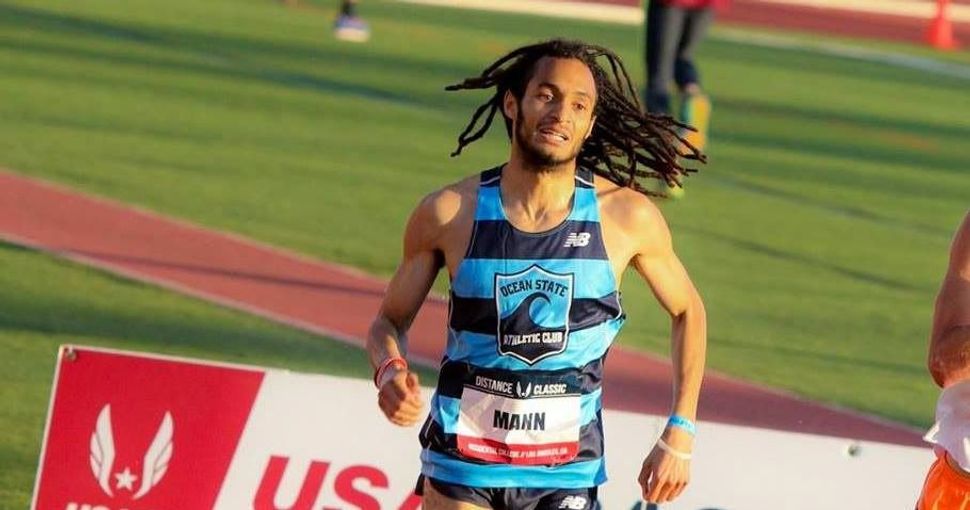 After the Olympics, Jordan Mann starts a new job at a Jewish nonprofit organization.

Jordan Gershon Mann is an Ivy League Olympic hopeful, has an MBA and likes to dress up as anime characters for comic book conventions. The 28-year-old Rhode Island resident will be competing in the Olympic track and field steeplechase trials in hope of joining Team USA on June 21 and 24 in Eugene, Ore.

He is a record-holding runner aiming to qualify in the steeplechase, in which competitors jump over hurdles and water obstacles. In an interview from his sunny Providence apartment, after he had finished his daily run and with his long dreadlocks gathered at the back of his head, he spoke with the Forward about his Olympic aspirations, his athletic career so far, his time as part of Brown University’s Hillel and his love of anime and the Japanese language. Mann also spoke about the evolution of his identity as a Black Jew.

Mann does yoga, has set Ivy League and state running records, created a march focused on the humanity of Black lives … and is also a Manga maven and enjoys attending Comic Con-type cosplay conventions.

After his parents divorced when Mann was a young teenager, he and his younger sister moved with their mom to St. Louis.

“I was a decent runner in high school,” Mann said. In his junior and senior years he made the All State teams in cross country and the two-mile race, twice each. “They were all decent results but weren’t indicative that I would have a high-level college career,” said Mann.

He wasn’t recruited to Brown University but the track coach allowed him onto the team as a walk-on member. At the Ivy League university, Mann double-majored in Applied Math and Economics, and the Education Department’s History and Policy track. For a time, he was interested in working in education policy, and then thought of coaching track. “I loved being at practice, knowing I would be there every day.”

While at Brown University, Mann went periodically to Shabbat and holiday services, but spent most of his time focused on running. And he began winning races.

After graduating from Brown, he enrolled at Providence College, where he could compete under NCAA rules and at the same time earn an MBA. In 2018 he finished fifth in the country running the steeplechase, an unexpected showing. “That was my arrival on the scene as a legitimate professional,” he said.

Reconnecting with his faith

As a younger child, Mann attended Hebrew school in Springfield, Ill., where they lived at the time. “Being in southern Illinois, there isn’t a massive Jewish community. Not until you move to the northeast do you meet people who went to day school,” the runner said. He and his sister, who is a year younger than him, shared a b’nai mitzvah ceremony at Temple Israel, a Conservative synagogue in Springfield.

Only in retrospect did he realize he experienced racism as a child, said Mann, whose mother is Black and a Jew by choice, and whose father is white and born Jewish.

“When I was in fourth grade and yelled at some girl, the whole school was put on alert that I was a problem child. I was very aware I was being treated like a bad kid. My friends Eli and Benjy were more troublemakers than I was,” said Mann. “I perceived it but didn’t quite understand the way my mother experienced what that overreaction was toward me. I knew I wasn’t really a bad kid but began acting out more once I was treated like one. I knew the principal was always watching me. When you’re under surveillance you notice it even when you are 11. I got sent to the principal’s office for everything.”

He said he has since “come to appreciate the significance of being Jews of color but when I was a fourth grader I wasn’t cognizant of it.”

After his parents’ divorce, his mother, Dr. Mary Polk – a pulmonologist and sleep medicine specialist now practicing in North Carolina – felt alienated from Judaism. “The negative experiences she had had colored the way she thought about Judaism and she found it difficult to separate some of the difficult experiences she had with the Jewish community,” Mann said. “We became disconnected from the Jewish community.”

At Brown, he began re-connecting through its Hillel. Mann went to occasional Shabbat and holiday services. “It was something I always realized had value for me whenever I did show up, and I always had a nice time. For all the people asking me if I know all the prayers, there was enough value for me to keep coming back.”

One day, after finishing his MBA and while he was looking for a part-time job that would allow him to pay the rent and continue focusing on running, Mann was at Brown University Hillel’s High Holiday services. Rabbi Michelle Dardashti began chatting with him and offered him a job on the spot. Mann worked there for four years, three as a program associate and one as Director of Student Entrepreneurship. “I was working with student interns on creative ways to see their Judaism in broader ways and to bring their friends together around unique ways to explore Judaism.” One of them made a Purim-themed Dungeons and Dragons game, which touched Mann’s nerdy heart.

Mann’s experiences at Hillel helped bring him closer to Judaism. He worked as a student advisor to “Hillelin’ with Melanin,” Hillel’s group for Jews of color, knowing that just his being present was a way of modeling being included to other JOCs. He also advised a group for Jewish student athletes, the Maccabears. (Brown University’s mascot is a bear.) “To be able to talk with other JOCs as a Jewish person of color, there is a way I can be personal with them and relate to them differently than others can.”

Mann recently left his job at Brown University’s Hillel and next month is scheduled to begin working at the Jewish Liberation Fund, a new group focused on raising Jewish money for progressive causes. (His start will be delayed, of course, if he qualifies for the Olympics.) “It feels like something with growth potential,” Mann said. And, while he has spent years focused on a long-term career goal of coaching, “suddenly being a Jewish professional is also a possibility.”

Racing toward the Olympics 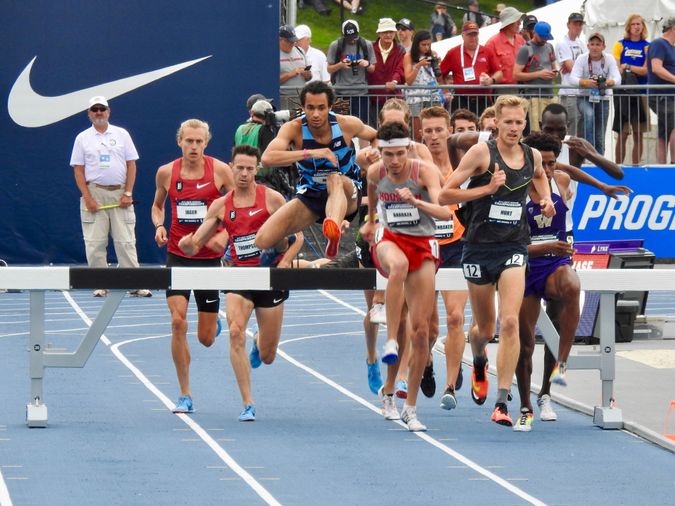 Jordan Mann, who walked on to the men’s track and field team while at Brown University, may make the U.S. Olympic team. In his spare time he has worked to become fluent in Japanese.

Running has been his main focus for the last few years. “I didn’t come out of college as someone thought to have a legitimate shot at making the world championship or Olympic teams. It was ‘let’s try to make the trials in 2020 and then figure out what I’ll do with the rest of my life,’” said Mann.

Today he is running 93 miles a week and working out with his coach and seeing his physical therapist, entirely focused on qualifying for the U.S. Olympic team.

Going to Tokyo would be a dream for Mann: he has for years studied Japanese, a pursuit which grew out of his love of Manga and a trip to Japan and has even thought about living there.

Mann, ever the pragmatist, has his eyes set on the future. “My goal now is to continue running through 2024. I have a good team of physical therapists and I’m going to training camps,” he said. “I hope to make a world team or Olympic team and keep running faster and setting personal records. Until then, we’ll see what happens.

“Now it’s about going to the trials and giving it a shot,” said Mann. But whatever happens at the upcoming Olympic trials and hopefully at the Tokyo Games, “I definitely want to make sure I have running as part of my life.”