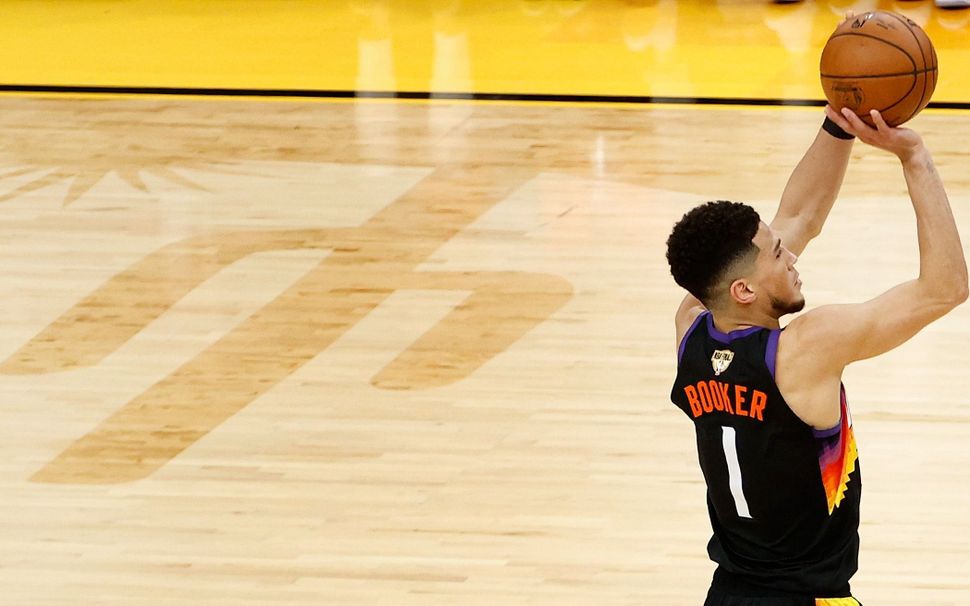 PHOENIX, ARIZONA - JULY 06: Devin Booker #1 of the Phoenix Suns shoots against the Milwaukee Bucks in game one of the NBA Finals at Phoenix Suns Arena on July 06, 2021 in Phoenix, Arizona. The Suns defeated the Bucks 118-105. By Photo by Christian Petersen/Getty Images

The whole video lasts less than 30 seconds, but it elicited fierce discussion among fans and players alike. Was Devin Booker right to complain about being double-teamed in a pickup game — where 1-on-1 matchups rule the day — or was a double-team not only fair, but a sign of respect?

It was the Great Devin Booker Debate in miniature — was he right, or just a whiner? — and it took place at an Orthodox Jewish high school.

This was back in the summer of 2019, before Booker was starring in the NBA Finals (Booker’s Suns lead Milwaukee in a 2-1 series with Game 4 Wednesday night), before he was dating supermodel Kendall Jenner, and before people understood he could be the cornerstone of a basketball dynasty in Phoenix.

At the time, Booker was still a polarizing figure among NBA fans who disagreed about whether he could anchor a winning team. The 6’5” shooting guard had increased his scoring output each of his first four seasons, placing seventh in the NBA in points-per-game in 2019, and yet that year the team finished with the second-worst win-loss record in the league. Some believed that a poor supporting cast was to blame, others that it was on Booker for not making his teammates better. (Shades of gray do not exist in NBA discourse.)

Many NBA players spend their off-season training in Los Angeles, where their battles in private gyms have become the stuff of basketball lore, replayed endlessly by fans salivating over their players’ exploits in defense-optional free runs. Whether these “open gym” runs are a truer representation of skill than what we see on national television broadcasts is besides the point: they feel authentic, and they happen during a time of year when the league is on hiatus, so they travel far.

And so: That’s how Booker wound up at Yeshiva University High School of Los Angeles (more commonly known as YULA), battling other pros in a pickup game of 5-on-5 whose stakes were nothing more or less than pride — but video of which would soon become as controversial as the young player at its center.

The clip begins with Booker receiving a pass in the corner. As he sizes up his defender, a second runs over to double-team him, forcing him to pass. Exasperated, Booker says, “Hey bro, we not doubling in open gym, bro…I get that all season…Come on bro, let’s work on our games.”

Booker’s complaint was that as the leading scorer of the Phoenix Suns, he neither wanted nor needed practice passing out of double-teams — and in a game of full-court fives, if you can’t stick your man, that’s your problem. Some of the league’s eminent stars, like Kevin Durant, took his side. Others, like Jameer Nelson, said he should appreciate the compliment. But the fan reaction seemed mostly informed by Booker’s reputation as a high scorer on a bad team — in other words, not quite good enough to make the rules.

But the background of the clip was not only a debate over Booker’s merits as a player, but also the Warhol yellow of the Samson Center — the home court of the YULA Panthers boys’ basketball teams — and a long-running basketball arms race between YULA and its crosstown rival, Shalhevet High School. (Disclosure: this writer graduated from Shalhevet.)

Both are Orthodox high schools in Los Angeles who have taken pride in their basketball programs for decades. But until the last ten years or so, YULA was known for having the superior program. But neither played its home games on campus until 2015, when Shalhevet opened a new, multi-million-dollar building whose sparkling gym was fully-appointed with hardwood floors, glass backboards, digital shot clocks and risers to seat a few hundred fans. Soon after, Shalhevet began hosting a basketball tournament for Jewish high schools around the country.

Not to be outdone, YULA — after dragging its feet for years on construction of a gym — finally opened its own, the Samson Center, three years later. In a sign of the intensifying rivalry, Shalhevet won its first game at the new building on a buzzer-beater — taken just a few feet from where Booker receives the ball in the video clip.

In recent years, the competition has extended to which NBA players use the courts to work on their games during the summer. Shalhevet has hosted Blake Griffin, Seth Curry, and Hassan Whiteside, to name a few, and in a 2016 interview with that school’s newspaper, The Boiling Point, Booker said he was open to working out there in the future.

On the other hand, YULA, whose gym is just as gorgeous as Shalhevet’s, and bigger, became host to the NBA pickup games themselves, and in this case, the lightning rod for a good summer argument about sports.

In the season following that summer, the Suns improved, ending on an eight-game winning streak that seemed to solidify the squad’s standing as up-and-comers. The year after that — that’s this season — they stunned the league by making the NBA Finals, and with Booker as its leading scorer, put the Great Booker Debate to rest for good.

Yet the rivalry between the two high schools — which arguably produced their impressive facilities, and by extension Devin Booker’s viral complaint — will go on.