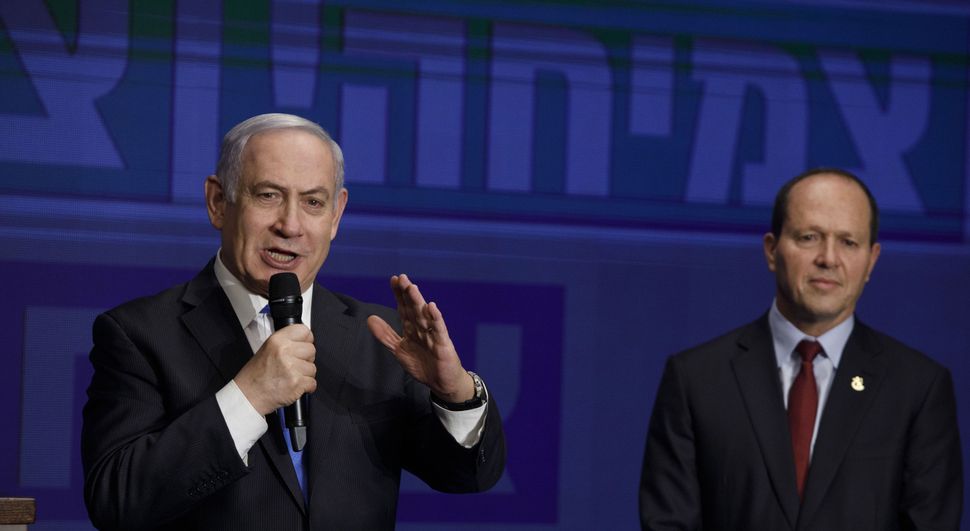 Nir Barkat, a member of the Knesset, is not a household name in the U.S. or Israel, despite his two terms as mayor of Jerusalem. Now a member of the main opposition party, Likud, Barkat has never served in the cabinet.

Nonetheless, the 61-year-old high-tech entrepreneur — whose net worth is estimated at several hundred million dollars — has consistently polled as the favorite to succeed former Prime Minister Benjamin Netanyahu as the leader of the nationalist camp.

While Netanyahu has vowed to remain as head of the opposition, Barkat seeks to pave his own path to the premiership. That path took a detour into the U.S. this week. He visited Washington and New York to promote legislation he is sponsoring to block the re-opening of a U.S. Consulate in Jerusalem to serve Palestinians — and to introduce himself to Americans who know little of him.

The math is on his side. In the current Knesset, an overwhelming majority — 72 out of the 120 members — identify themselves as right-wing. That includes the Likud, the religious Zionist and haredi parties, and the parties that are currently part of Israel’s new government — Naftali Bennett’s Yamina party, Gideon Sa’ar’s Hatikvah party and Avigdor Lieberman’s Yisrael Beiteinu. Barkat, who has said he would run for prime minister if and when Netanyahu retires, could claim a majority-governing coalition in the event of new elections.

“As an entrepreneur, I’ve been working on plans and future models, quite out of the box, on how to take Israel to the next stage,” Barkat told the Forward Wednesday. “I know how to make things successful and now that I’m dedicated to the State of Israel. People see me, hopefully, as somebody that could be put to power and make a big difference.”

His strategy is focused on building consensus — and biding his time.

“I am a connector — I focus on how to create common denominators,” Barkat said.

In the U.S. this week, Barkat lobbied for his consulate bill, armed with a poll he commissioned that showed 72% of Israelis opposed a U.S. consulate to serve Palestinians in Jerusalem, a move President Joe Biden promised in his 2020 campaign for the White House. The survey of 500 respondents conducted by the Direct Polls polling firm — which Barkat shared with the Forward as he whipped out his smartphone during the hour-long conversation at a Midtown Manhattan restaurant — also showed a majority of Israelis who voted for Yair Lapid’s centrist Yesh Atid party and a plurality of Labor voters opposed the idea.

He said he told the group that Israelis’ trust hung in the balance and that they needed to convince Biden to change his mind. “I basically said, you’re going to lose Israelis and it could destabilize the government,” Barkat recalled. 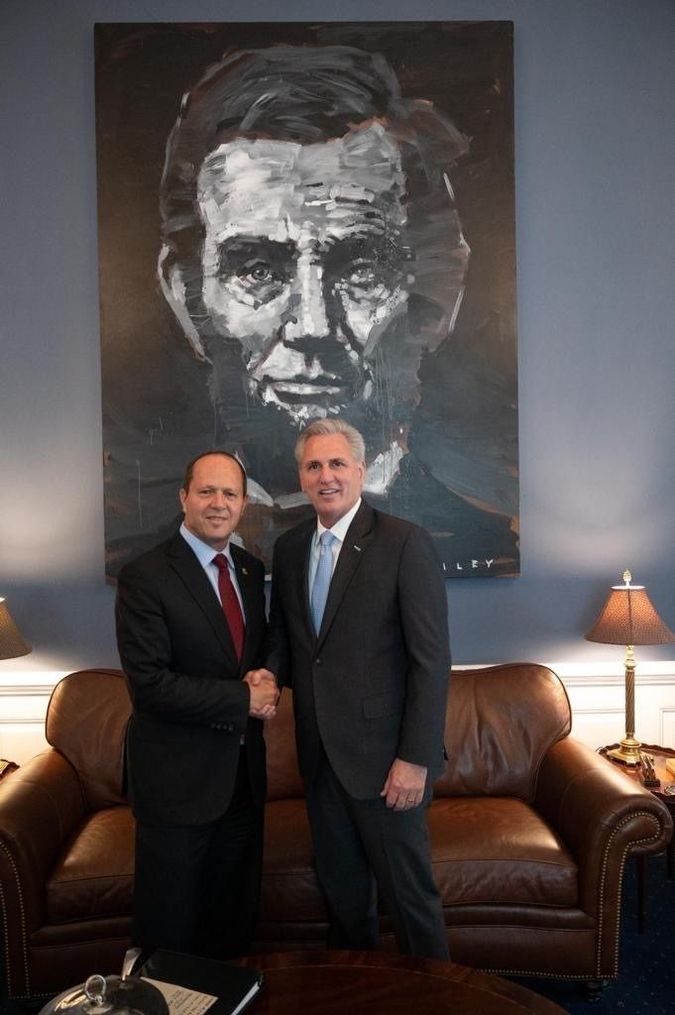 After the Six-Day War in 1967, when the U.S. Embassy to Israel was in Tel Aviv, the American diplomatic mission to the Palestinians operated out of a consulate in West Jerusalem. After the relocation of the embassy to Jerusalem in 2018, the Trump administration merged the mission into a Palestinian Affairs Unit at the embassy. The consulate building on Agron Street now serves as the official residence for the ambassador to Israel.

Secretary of State Tony Blinken pledged to fulfill Biden’s promise to reopen the consulate during a recent visit to the region as the administration seeks to rebuild its ties with the Palestinian leadership. Axios reported that the White House decided to postpone the move until the new Israeli government meets a November 4 deadline to pass a budget, so as not to shake up the fragile coalition.

Barkat’s hope is that the legislation, which prohibits the opening of any foreign mission in Israel’s capital, would disrupt Biden’s plan or give the prime minister cover to reject reopening if the Knesset allows it. Some 38 members have signed on as co-sponsors to Barkat’s bill, but it would require the unlikely support of the coalition or some defectors for it to pass.

The Likud lawmaker said the U.S. should instead locate its diplomatic mission to Palestinians — despite their lack of a state — in the West Bank city of Ramallah. “You can’t do that in Jerusalem,” he said. “It’s a new thing. It contradicts the vision that we have about the unity of the city of Jerusalem.”

Barkat said that as a member of the opposition, and as the former mayor of Jerusalem, he has the standing to present the case to the Americans.

But Israelis may not care much.

“The issue of the consulate is not that important on the central Israeli agenda these days,” said Tal Shalev, a political reporter for Walla News!, an Israeli news site. But it might help Barkat position himself within the Likud as the ultimate successor to Netanyahu’s “Mr. America” image, she added.

Barkat said he was pleased by the reception he received in Washington. “Members from both parties heard me out, and I think now there is a better understanding of the implications of such a move,” he said. 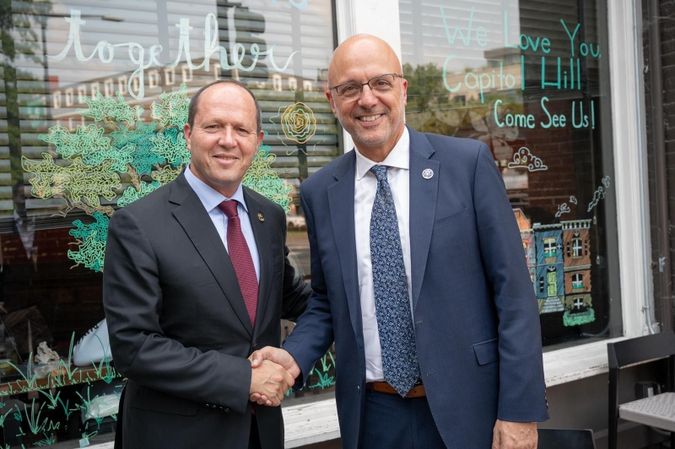 But Congressional Democrats, who are already grappling with diverging attitudes toward Israel within their ranks, may want to steer clear of Barkat’s proposal.

“An issue like this could just be used to further try to deepen or sharpen the divide among Democrats, who are overwhelmingly supportive of Israel and the ongoing support for the Palestinians,” suggested Matt Nosanchuk, president of the progressive advocacy group New York Jewish Agenda. “It presents a real risk of pitting members of Congress who broadly agree on issues, against each other.”

The long or short road ahead

Barkat’s moves seem to fly in the face of the current strategy of the opposition headed by Netanyahu — which is to divide the current government by almost any means.

In recent weeks, for example, Likud members joined the United Arab List in voting down the extension of a law that bars family unification between Palestinians married to Israeli citizens and engaged in sleepless nights of filibustering government legislation.

Netanyahu’s chances of toppling the government and then leading it is widely viewed as slim. A no-confidence vote requires 61 members. And Netanyahu, who lost a majority in four consecutive election cycles in two years because so many distrusted him, would unlikely be able to muster the support to form a government.

Barkat himself was burned by Netanyahu. In the March 2, 2020 election, the Likud leader promoted Barkat as the next finance minister, but the post was given to another member, Israel Katz, when he formed a rotation government with Benny Gantz. Barkat said he holds no grudge, and holds himself out as a better choice to lead the government.

“I don’t just criticize the coalition,” he said. ”I also offer an alternative.”

He said Bennett, who is serving as prime minister for the first two and half years of the power-sharing government, is going to have a very hard time returning to power in future elections for the compromises he needed to make to cobble a government together. “The way he flipped 180 degrees on what he had said to his own constituency, makes it impossible for people to believe anything he says in future,” Barkat said.

And he said he can be patient. “God will provide the right timing,” he said.

Other factors are at play in the contest to lead Likud. Earlier this week, Netanyahu announced a one-month party membership drive that could decide the party’s next leader. Then there’s the question of when Netanyahu will retire. Former Mossad chief Yossi Cohen and Gilad Erdan, Israel’s current ambassador to the U.N., are also viewed as popular candidates within the Likud. Other Likud rivals have accused him of trying to buy his way to the top.

‘It’s too early to judge,” Walla’s Shalev said about Barkat’s chances. “At the moment, Netanyahu is still leading the Likud, he doesn’t intend to leave soon, and there’s no primary race now.”

In the meantime, Barkat is trying to win allies.

“As Mayor of Jerusalem, 30 out of 31 council members were in my coalition,” he said. “I make an extra effort to connect people. I would never bad mouth people. I always approach them in a professional manner.”

Similarly, he said, he seeks to build relationships with American Jews, even as he supports the status quo on religious matters that much of American Jewry would like to see changed in Israel. “It’s all about setting expectations right,” he said. “You have to be very honest and fair with people, and propose solutions to get people to agree. I’ve done that many times.”

Barkat also weighed in on ice cream — the debate raging over Ben and Jerry’s move to end sales in the occupied West Bank. Barkat said that he’s against any sort of boycotts in principle. But he questioned what he deemed too much attention given to the company’s decision.

“It’s best to downplay these issues to make it go away,” he said.