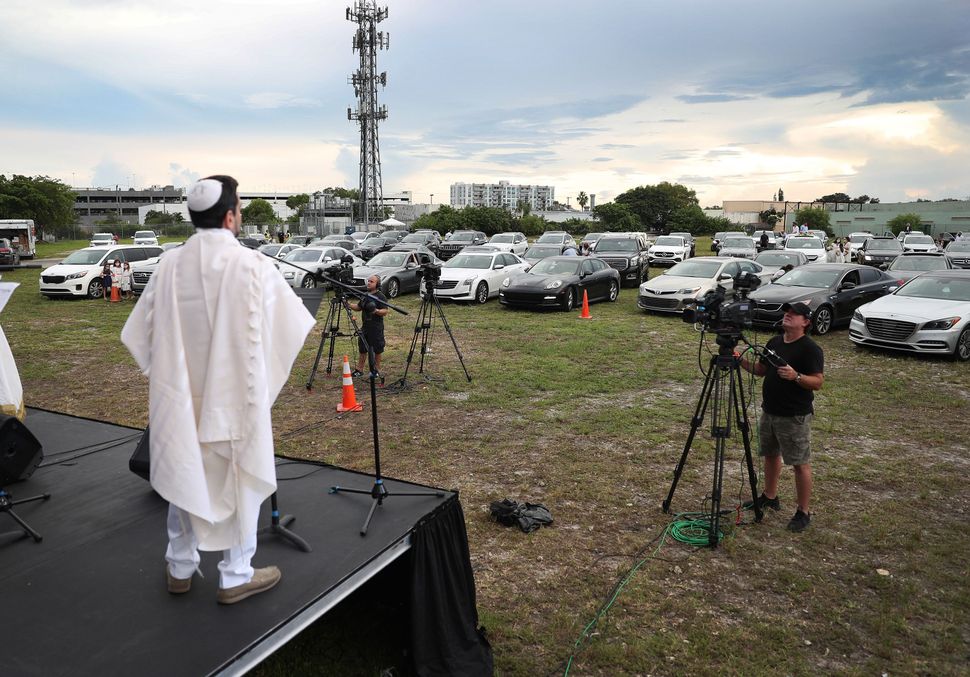 Rabbi Joe Hample performed last year’s High Holiday services at his West Virginia synagogue in front of an empty sanctuary, posted the recording to YouTube and cobbled together a digital prayerbook so members could follow along at home.

In the spring, as his state led the nation in vaccinations and the pandemic appeared to be ending, the Morgantown rabbi purchased new prayer books and started drafting an uplifting sermon for what he expected to be in-person High Holiday services in September. But vaccinations stalled, allowing the COVID-19 Delta variant to surge and the pandemic to come roaring back. Now Hample is going back to the drawing board.

“No matter what we do some congregants will be angry and disappointed.”

“We’re trying to bluff our way through a very dynamic and precarious situation,” Hample said. “I’m going to have to rewrite those sermons.”

The Tree of Life of Congregation, which Hample leads, is still planning to hold some services in person. But he said they are planning to require masks and determine how many people the sanctuary can safely accommodate as the vaccination rate in the local county sits below 20% and cases are up 45% over the past week.

The vaccination rate among synagogue members who have been polled by their leaders tends to be far higher than the surrounding community, said Amy Asin, the Union for Reform Judaism’s vice president for congregations, and Jews have the highest rates of vaccination among any religious group.

“Six weeks ago that made you feel pretty confident that you were going to be able to have indoor services with no social distancing and maybe even no masks,” Asin said. “Now there’s at least conversation about whether or not that still makes sense.”

It’s a discussion taking place across the country as synagogues that were planning to throw their doors open for Yom Kippur and Rosh Hashanah now scramble to respond to a resurgent public health crisis.

More than 90% of congregations are still planning to offer some onsite services, according to an informal survey of more than 100 synagogues conducted by the North American Association of Synagogue Executives last week, but only 30% will operate at full capacity. Nearly half will require universal masking and close to 40% are mandating vaccines for those attending High Holiday services.

“Flexibility and adaptability will be the watchwords to live by,” said Harvey Brenner, the group’s president. “We’ve been making important operational decisions with our feet planted firmly in quicksand.”

A handful of congregations have canceled all in-person programming, including Congregation Ner Shalom in northern California, where president Amy Gray told the local Jewish newspaper that it wasn’t worth the risk.

“I was looking forward to being with people,” Gray said. “But not now.”

Some Orthodox synagogues, which can’t move to an online service, are pursuing a variety of creative options. Congregation Ohr HaTorah in Atlanta offered seven different services last year, both indoor and outdoor, to allow adequate spacing and ventilation. Until a few weeks ago, Rabbi Adam Starr thought that wouldn’t be necessary this year: the congregations’ medical committee believed the 95% vaccination rate among adult members would allow indoor services without masks. But recent data about “breakthrough” cases among vaccinated individuals has upended that plan.

Ohr HaTorah was planning to again have indoor services — some with masks mandatory — and outdoor services, in a tent for adults and on a lawn for children. But, on Friday, they decided to return to mandatory mask wearing while indoors. Starr said the congregation, which counts many Center for Disease Control experts among its membership, has built significant trust over the last year and — “thank God” — the stakes are lower than they were before vaccines became widely available because the risk of death and serious illness is far lower.

“The fear is not what it was last year,” Starr said.

Clergy and other congregational leaders are also calling for patience as they face a choice of angering some members by scaling back or placing restrictions — like masks or vaccines — on onsite services, or push ahead despite the concerns of others.

“This is exhausting,” one anonymous respondent wrote in the survey of synagogue executives, “and no matter what we do some congregants will be angry and disappointed.”