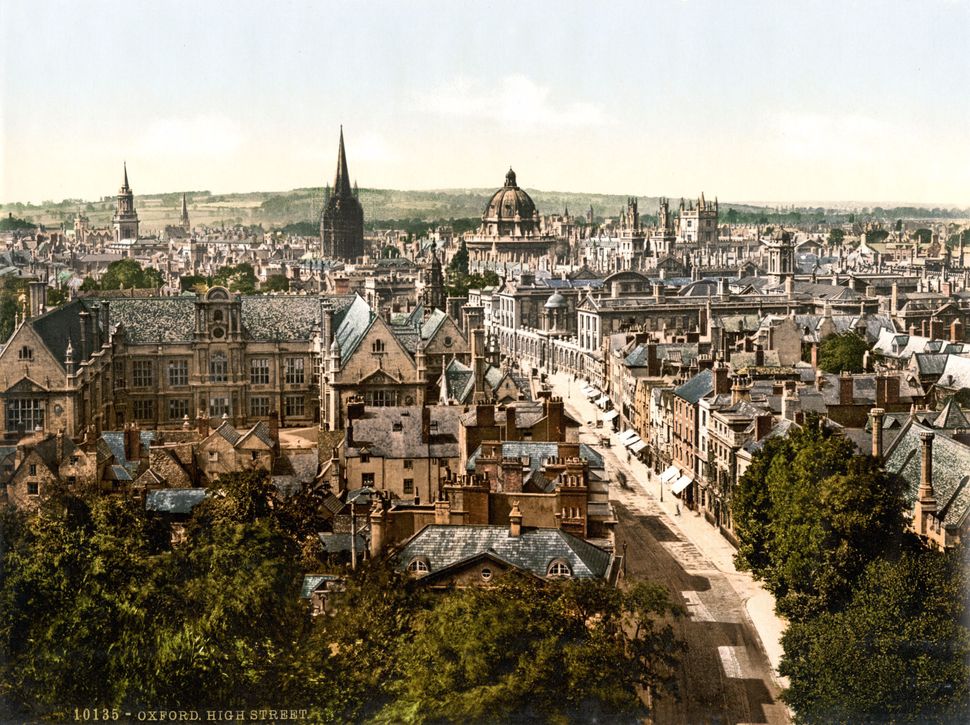 When Jews long ago ordered their coffee in Baghdad, gossiped in Derbent or traded recipes in Kurdistan, they did so in Judeo-Arabic, Juhuri and Neo-Aramaic— languages that are all but lost, and with them centuries of unique Jewish history, culture and tradition.

Beginning this fall, Oxford University will be offering online classes in nearly a dozen sych historical Jewish languages, from Yiddish and Ladino to Karaim, Judeo-Italian and Judeo-Greek.

The program, called the Oxford School for Rare Jewish Languages (OSRJL), won’t just be available to students at the elite British institution, it will be accessible to all — and free of charge.

The decision to establish the program online was in part inspired by the online boom of Yiddish and Ladino studies during the pandemic.

“We were really encouraged by last year’s teaching online,” said Professor Judith Olszowy-Schlanger, president of the Oxford Centre for Hebrew and Jewish Studies in which the school is housed, “and we all realized that we could take advantage of this difficult situation.”

Of the 11 languages offered, only Yiddish is not considered endangered. Many have less than 1000 native speakers and at-least one, Judeo-French, is entirely extinct, only being able to be studied from Medieval manuscripts.

“There were once as many languages, dialects or sociolects, — whatever we may call them, — as there were Jewish communities in the past, but only a few are still spoken,” she said. “They are a part of Jewish heritage, but they are also a part of what we call an immaterial heritage, which is very difficult to preserve,”

That’s why it’s so important to make the program available to the widest audience they can, she explained. In the past, education in these languages was locked in the ivory tower, only available to academics who were generally assumed to have a strong background in the related non-Jewish languages.

“So if you wanted to study Judeo-Arabic, well it was assumed that you already knew Arabic,” Olszowy-Schlanger said. Due to the events of the 20th century, from the Holocaust to the mass-exodus of Middle Eastern Jewry, the descendents of the communities which once spoke these tongues now live far from the contexts in which they were first established.

For example, a Mizrahi Jew living in the United States, Israel or France may have heard a bit of Judeo-Arabic at home from parents or grandparents, but didn’t necessarily ever learn formal Arabic itself, putting a roadblock ahead of further study of their own heritage tongue in a traditional academic settings.

That’s one reason Dr. Assaf Bar-Moshe, who will be teaching the course on Baghdadi Judeo-Arabic, is excited to be spreading knowledge of his heritage language.

Growing up in an Iraqi Jewish family who only emigrated to Israel in the 1970’s — two decades later than most Iraqi Jews — Bar-Moshe, 40, knew the language from childhood, but never gave it much thought, despite a love for languages.

He first completed a master’s in Mandarin Chinese before his advisor at Hebrew University told him he was crazy to not try to preserve the language of which he was one of the last remaining speakers. So he did, completing a PhD in the topic.

Bar-Moshe expects that his course will still necessarily include a lot of the basics of Arabic, but he will be sure to focus on the common expressions and recordings of the unique Baghdadi Jewish dialect that tells of Baghdad’s historic Jewish culture.

During the first term, Oxford’s ‘Michaelmas’ term which begins October 10th, only Judeo-Arabic, Judeo-Italian, Judeo-Tat (also known as Juhuri, a Persian-based language spoken by Jews in the Caucasus mountains of Northern Azerbaijan and Southern Russia) and three levels of Yiddish will be offered. In the winter, the program will expand to include Judeo-French, Judeo-Persian, Judeo-Neo-Aramaic, Karaim (a Turkic language spoken by Eastern Europe’s Karaite communities) and beginners Ladino. In the spring of 2022, Judeo-Greek and Judeo-Turkish will be added to the roster.

With funding already secured for three years, Olszowy-Schlanger also hopes to expand the program’s activities to include a blog and published gazette on topics related to endangered Jewish languages.