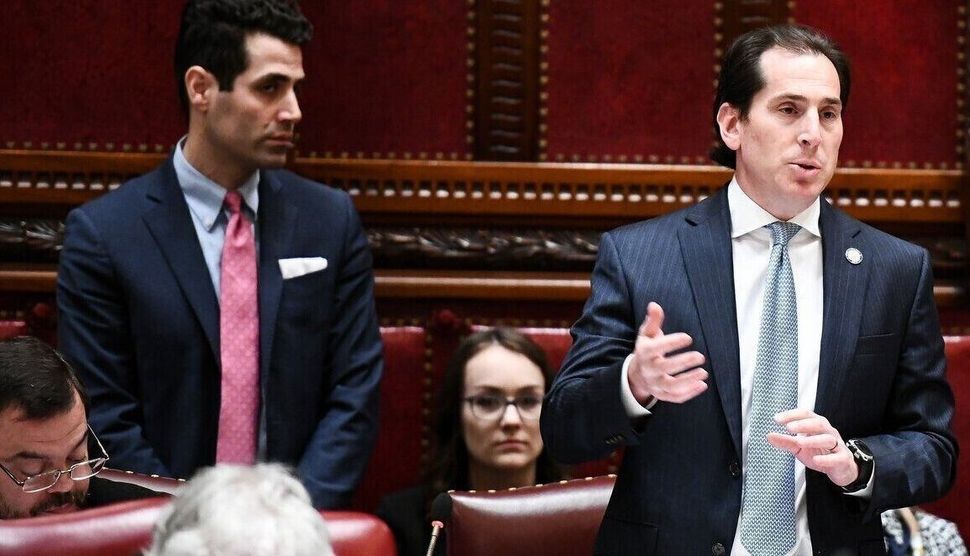 Then an assistant U.S. attorney in New York’s Eastern District, Kaminsky was considering running for elected office and wanted to know what Brooks, the younger brother of his grandfather Lenny Kaminsky, thought of the idea.

He recounted fighting the Nazis in World War II and returning to find that his mother had managed to secure a job for him at the Brooklyn Navy Yard as a clerk. But Mel (born Melvin Kaminsky) wanted to be a comedian, so he got into a taxi and ordered the driver to take him to the Catskills, where he started his career in stand-up and went on to win an Oscar, a Tony, and an Emmy.

“And look what happened to your uncle,” Kaminsky remembers Brooks telling him.

The star then told his grand-nephew to run for office. “He said, ’If you believe this in your heart, you must pursue this, and I’ll help you in any way I can,’” Kaminsky related.

A year later, Kaminsky, a Democrat, was elected to the New York State Assembly, succeeding former Assemblyman Harvey Weisenberg in the 20th District in Nassau County. He ran for the State Senate in 2016 after the Republican majority leader Dean Skelos was convicted on corruption charges.

After his election, Kaminsky honored his great uncle with a Senate proclamation recognizing the New Yorker’s cultural achievements. And Brooks bragged about his nephew’s new political prominence at Radio City Music Hall event, Kaminsky wrote on Facebook at the time. 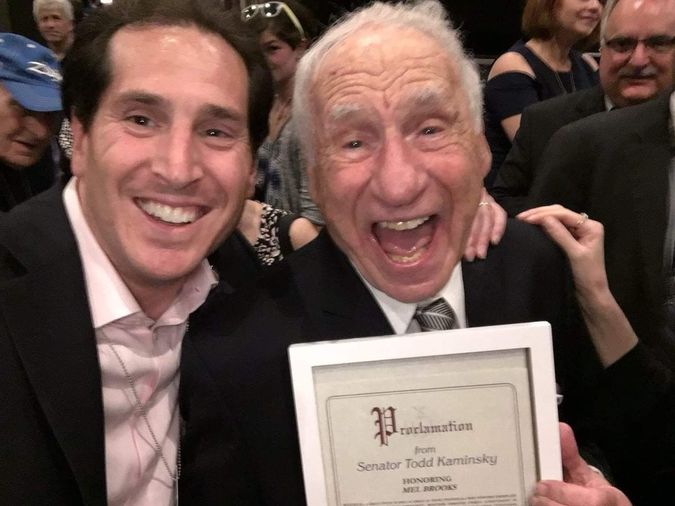 Todd Kaminsky with his great uncle Mel Brooks after presenting him with a Senate proclamation recognizing his cultural achievements at Radio City Music Hall on Sept. 2, 2016. Image by Todd Kaminsky/Facebook

Earlier this year, Kaminsky announced his candidacy for Nassau County District Attorney — with the blessing of his great uncle.

In his four terms in office, Kaminsky, who oversaw high profile cases of New York politicians as a prosecutor, took on political corruption in Albany. “There are lots of victories that I can look back fondly on my time at Albany and know that I’ve made a difference,” he told the Forward. 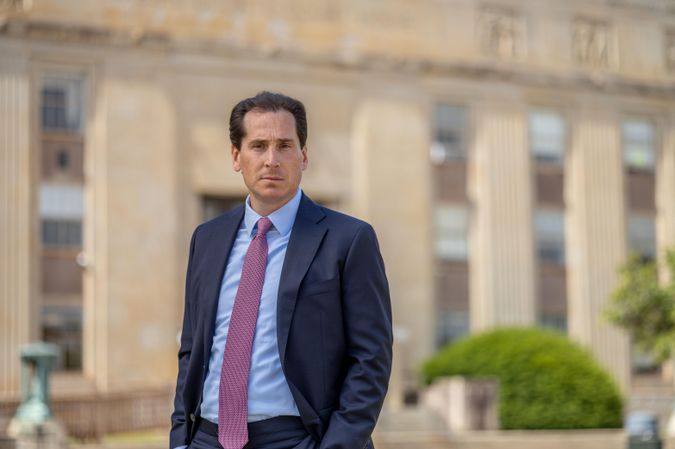 He said he’s particularly concerned about rising hate crime, and would make combatting it a priority as the Nassau County’s lead prosecutor. “I am going to continue to take a tough and aggressive approach to stamp down violent crime as I did as a federal and state prosecutor,” he said.

He outlined his four-point plan to fight the recent spike in violent antisemitism across New York in a recent op-ed for the Five Town Jewish Times, co-authored by Assemblyman Simcha Eichsntein of Brooklyn.

His predecessor, Madeline Singas, who stepped down earlier this year to become an associate judge on the New York Court of Appeals, used to send teenagers arrested for spraying hate graffiti to the Holocaust Museum on the North Shore of Long Island to make them understand the severity of their crime and teach them tolerance. Kaminsky, who introduced legislation that would require public schools to provide adequate Holocaust education, said people shouldn’t have to be arrested for a crime to learn about the Holocaust and the consequences of bigotry.

He also signed onto a bill, introduced by Sen. Anna Kaplan, D-Great Neck, that would require the state to audit Holocaust education in public schools. The bill is still being considered by the Assembly. “To have children graduating school and not knowing what Auschwitz is is a shonda,” Kaminsky said, using the Yiddish word for disgrace.

A Democrat and a champion for Israel

Kaminsky highlighted his support for Israel and opposition to the Boycott, Divestment and Sanctions movement as another key component of his commitment to fighting antisemitism. “It’s clearly antisemitic to just single out one country, Israel, for perceived acts that no other country is held to those same standards for,” he said about BDS.

Kaminsky, who has visited Israel three times in recent years, also pointed to the recent conflict between Israel and Hamas in Gaza that unleashed a wave of antisemitic attacks against Jews in major cities across the U.S. “People see that when it is okay to attack Israel, it is okay to attack Jews anywhere,” he said. “I cannot stand for that.”

In 2016, Governor Andrew Cuomo — who is resigning on Monday over sexual harassment allegations — signed an executive order that prohibits state agencies from investing in companies involved in boycotting Israel. Kaminsky said he supports action against Unilever, the parent company of Ben & Jerry’s, over the ice cream maker’s decision last month to end sales in the occupied West Bank. “New York has had a traditional relationship with Israel that dates back to its founding, and it’s important that it remains so,” he said.

Kaminsky also criticized the local chapter of the Democratic Socialists of America for asking candidates who sought their endorsement to sign a pledge that they will not travel to Israel if elected. The DSA later clarified that the pledge refers specifically to the annual trips sponsored by the Jewish Community Relations Council. “I think that suggestion is crazy,” he said. “You know, anyone who wants to get me a ticket to Israel, I’ll be on the next plane.”

Kaminsky, who currently represents the Five Towns, which include a large Orthodox population, said as a “tremendous supporter of Israel,” he is at times grappling with an “unfortunate perception” that the Democratic Party has become hostile to Israel. In his first run for the Senate in 2016, as a Democrat, Kaminsky said he had to work hard to gain the trust of the Orthodox community.

Looking toward Election Day, he said he anticipates a “nasty” campaign from his Republican opponent, Anne Donnelly, a 32-year career prosecutor. He speculated that she might try to label him as soft on crime and tie him to the Defund the Police movement. His own campaign, he said, will give him the opportunity to present his actual moderate approach to politics and governing.

“What I keep stressing is that it’s very important that there be bipartisan support for Israel,” he said. “And I hope that voters are happy to consider supporting me regardless of what party I am from.”

A family tradition of giving back to the community

Kaminsky said that he grew up drawing inspiration from his grandparents, who were committed to public service and served on local school boards. His grandfather Lenny Kaminsky was a World War II veteran and the son of an immigrant from Poland who saw relatives persecuted by the Nazis. His family helped found Temple Beth El of Cedarhurst, where Kaminsky is a member. 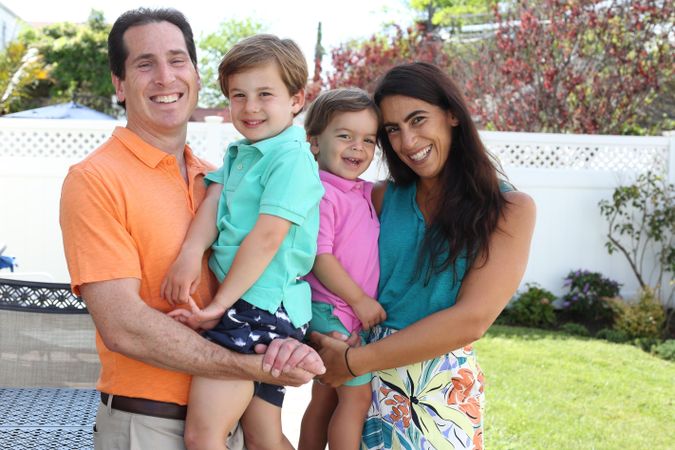 “They thought it was very important that Jewish Americans stand up and lead in America and do our best to make the country and the community better,” he said. “And so when I had the opportunity to graduate law school, I wanted to pursue public service. I left a very high paying job to go do that, and I don’t regret it for a minute.”

And the public he wants to serve most is the one he grew up in, he added. “I still live in the community I was raised in and live on the block my grandparents lived on,” he said.