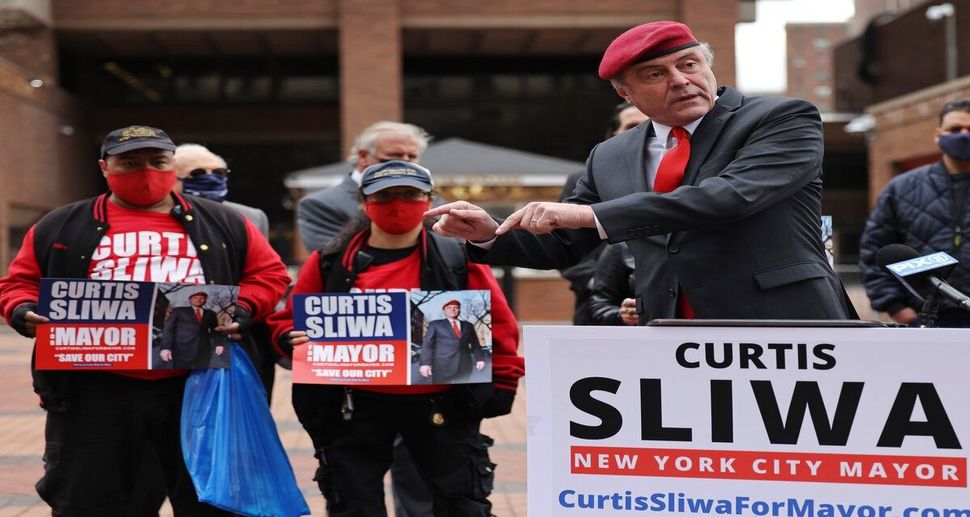 For four years in a row, in the mid-1990s, New York mayoral candidate Curtis Sliwa was the sour garlic pickle-eating champion of the world and almost earned a silver in a matzah ball-eating contest — before he was disqualified for tampering with them.

Others may know Sliwa better as a radio personality and the founder of the Guardian Angels, the citizen group that has patrolled New York City streets for more than 40 years. Or perhaps as the winner of this year’s Republican mayoral primary.

The first pickle win, in 1994, came by surprise. Sliwa, now 67, was recovering from gunshot wounds and Abe Lebewohl, a Holocaust survivor and founder of the 2nd Avenue Deli who brought him chicken soup every day, encouraged him to represent the Lower East Side in the annual sour pickle-eating contest held at the Carnegie Deli in Manhattan. “Just come and have a few bites,” Sliwa recalled Lebewohl saying.

“I not only took a few bites. I kept eating and eating,” he said. “I won the contest against these monsters from Ukraine, Russia and Poland, who live on pickles. And then actually, once you win the championship, you have to defend it.” 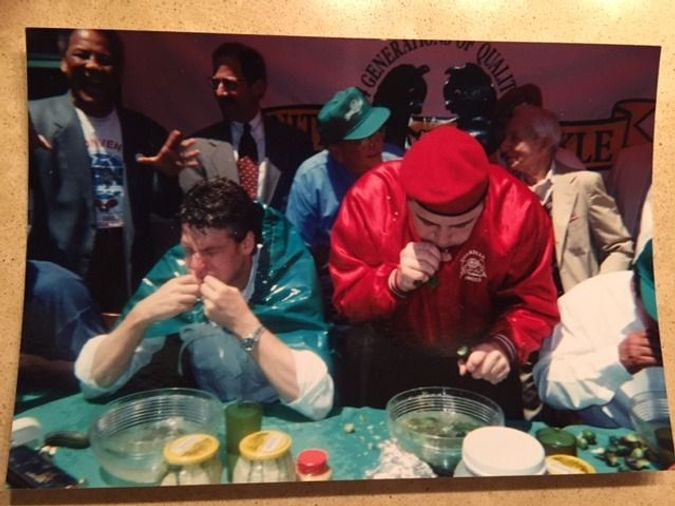 Curtis Sliwa, founder of the Guardian Angels, competing in the sour pickle eating contest held at the Carnegie Deli in Manhattan in the mid 1990s Image by Courtesy

Sliwa, who invited the Forward into his Manhattan studio apartment for an interview, is aware that his chances are grim. But he hopes that his stance on raging gun violence, his passion for animal rights and a populist message on police reform will give him a chance to broaden his appeal.

One particular source of frustration for Sliwa is that he’s not winning over voters within the Orthodox Jewish community, which favors Republicans in general and national elections — and that’s despite his tough-on-crime promises amid the recent rise in antisemitic incidents and the community’s deep frustration at how city government handled the coronovirus pandemic.

Sliwa lamented that Orthodox community leaders decided to back Adams while “a friend of the Jewish people” was never invited to make his case.

“I have a lot of credibility in those communities,” Sliwa said, pointing to the numerous times he was asked to bring his Guardian Angels to patrol the Brooklyn neighborhoods where many Orthodox live. “I would have thought that just out of respect for all that I’ve done in the Jewish community over the years, they would have at least provided me with the opportunity of making a presentation.”

Sliwa said his familiarity with the Orthodox community should have at least earned him the same level of support it gave George Pataki in New York’s 1994 gubernatorial race, when the then unknown Republican state senator ran against three-term incumbent governor, Mario Cuomo. “I have one advantage that George Pataki didn’t have,” Sliwa said. “He was running against a far more well-respected, iconic figure in the Democratic Party than Eric Adams. Cuomo was destined to be president of the United States or a U.S. Supreme Court justice. Nobody knew who Pataki was.”

Apologizing for past comments about Orthodox voting blocs

But as he attempts to win over Orthodox voters, Sliwa is contending with a video recently circulated on social media that shows him slamming the Hasidic community as controlling interlopers. He is trying to downplay the remarks, which he said were part of a speech he gave in 2018 to supporters of the Reform Party, which he once chaired in New York State. The remarks were made in “a heated political battle” when some of his candidates in Rockland County were faced with a bloc vote, Sliwa said. “I regret saying that,” he said of his comments. “Those are words that should not have been said, and those are words I would not say again.” 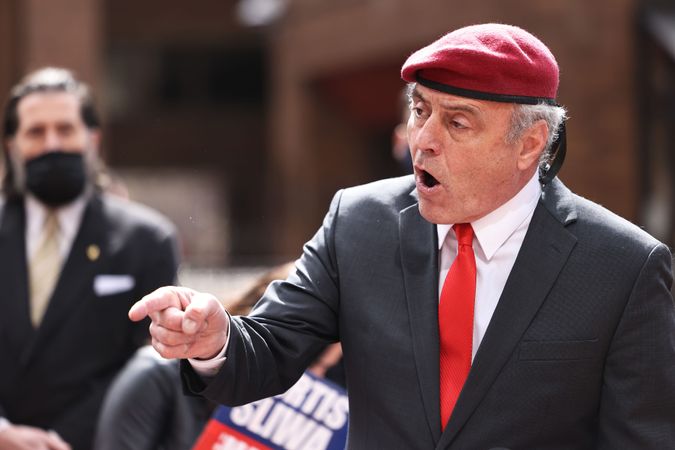 Curtis Sliwa, the Republican nominee for mayor of New York City, during a press conference at One Police Plaza on April 13, 2021 Image by Michael M. Santiago/Getty Images

Sliwa said he’s been trying to make up for those remarks by engaging with members of the community and meeting in private with its influencers. The Sliwa campaign provided the Forward with a list of the candidate’s recent appearances in Jewish neighborhoods that were not on his public schedule and said he recently met with leaders of the Chabad and Satmar sects in Brooklyn and the Bukharian Jewish community in Queens.

Sliwa said he recently launched a new website, called “Jews Choose Curtis” that will feature all of his public remarks to prove that he’s been consistently supportive of the Jewish community and that he’s willing to apologize when he’s offended. The site lists 10 reasons Jews should pick Sliwa as their choice for mayor. “A proud gentile father of two Jewish sons whom he’s chosen to raise as Jews,” is at the top of the list. (Sliwa’s sons are from a prior relationship with Queens District Attorney Melinda Katz. He was granted visitation rights after the couple separated in 2014.)

He questioned the timing of the resurfacing of the 2018 video clip, when Adams was inching toward victory in the primary, claiming it was “a political hit job. No doubt.” Agudath Israel of America condemned Sliwa and accused him of antisemitism over the video.

Whoever released it was “probably working with Eric Adams’ campaign to sort of slow down any movement to support Curtis Sliwa in the Orthodox and Hasidic community,” he alleged. “To accuse me of being an antisemite, that was a shanda,” Sliwa said, using the yiddish term for disgrace. “That’s a harsh term. That was the most hurtful of all accusations.”

His comments were part of monologue in which he also criticized Orthodox leaders and the media for “insulating Adams from criticism” and failing to demand that the Democratic nominee publicly apologize for his past praise of Louis Farrakhan, the head of the Nation of Islam who is known for his antisemitic rhetoric. Adams, responding to criticism of the remarks, has said that he was commending a public safety program that the Nation of Islam’s local chapter was promoting.

Adams has maintained his support in the Orthodox community. He recently met with community leaders in Brooklyn and Queens, according to sources with knowledge of parts of his schedule that are not released to the public, and has attended several fundraisers with Jewish supporters across the city.

Sliwa said he will challenge Adams about his past comments related to Farrakhan during an upcoming televised debate.

And despite the tough road ahead, Sliwa said he’s confident he will win voters over before the Nov. 2 general election, pointing to Adams’ slim margin of victory in the Democratic primary and highlighting his organizational experience, passion for animals — he lives with 16 cats in his 320-square foot apartment — and love for electronic dance music, “like a lot of hipsters and millennials.”

A natural competitor, Sliwa, whether he wins the mayoral race or not, seems to be enjoying the campaign. He loves a challenge, whether it’s for public office or for a pickle-eating title. The pickle contest was far from his only foray into competitive eating.

Sliwa also competed in the Nathan’s hot dog contest in 1996, finishing in third place. He has also tried to out-eat others in pizza, cannoli and cheesecake-eating contests.

More relevant to Jewish voters perhaps, in 2002, Sliwa came in second place in the annual matzah ball eating contest at Ben’s Kosher Deli in Manhattan. But he was disqualified because he was caught squishing the matzah balls to get the liquid out, which was against the rules. He recounted telling Raoul Felder, a famous divorce lawyer who was watching him, to his defense, ‘I didn’t grow up eating matzah balls. I grew up eating meatballs. This is the way a gentile eats matzah balls.’”

“Let me tell you something, they binded my stomach,” he said of the experience. “It was like Montezuma’s Revenge, it was rough.”

He knows his limits, though. Don’t expect to see Sliwa touring the neighborhood of Borough Park and eating a plate of cholent. “I can’t have it anymore. I have Crohn’s disease,” he said.