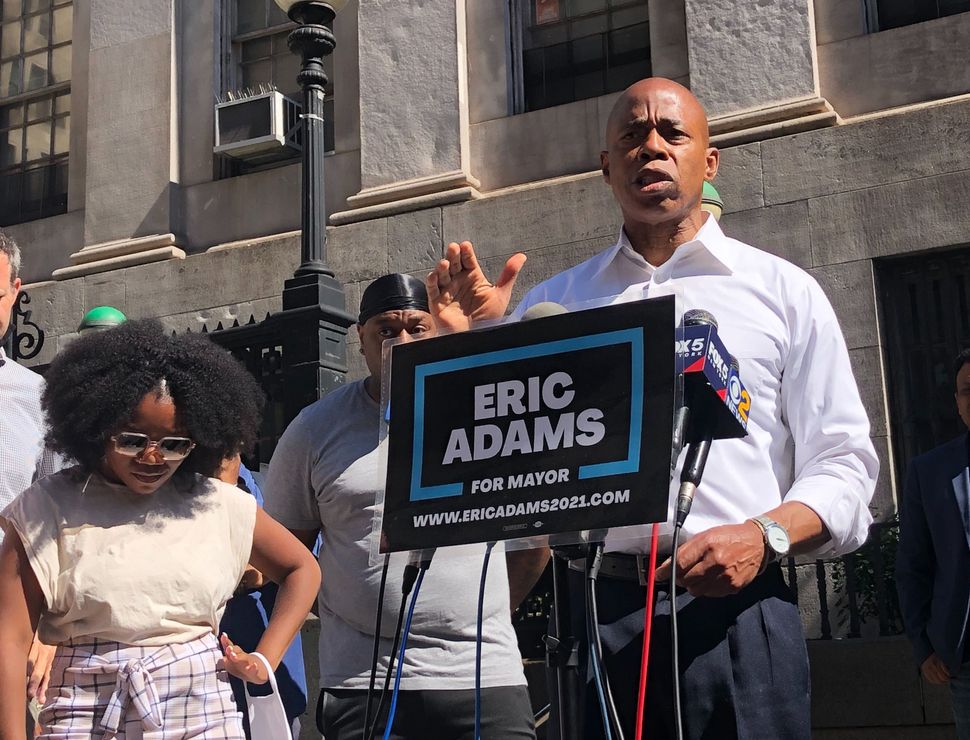 Eric Adams was declared the winner in the race for mayor of New York City on Tuesday after an initial count of in-person, early voting and absentee ballots. The Associated Press made the call after the New York City Board of Elections released the preliminary results of the June 22 Democratic primaries.

Adams, the Brooklyn borough president, maintained a slight lead of more than 8,000 votes over Kathryn Garcia, a former sanitation commissioner, according to an updated tally that included most of the 125,000 absentee ballots that were not included in the first count of the ranked-choice votes announced last week. The 50.5-49.5% margin is well over the half percent threshold that would force a hand recount.

Adams attributed his victory to “an historic, diverse, five-borough coalition led by working-class New Yorkers,” in a statement on Tuesday. He received significant support from Orthodox voting blocs. Garcia was the second or third choice of some Jewish groups and many voters in the ranked-choice primary.

The slowness of the ballot-counting process, due in part to the more complicated tabulation of ranked-choice ballots, added to frustrations with the board after it botched an earlier count of the results based on in-person and early voting last week. The elections board had to retract a preliminary tabulation because it included 135,000 dummy ballots that were not cleared after a test. State lawmakers have already pledged to take action to restructure the 10-member board of political appointees. 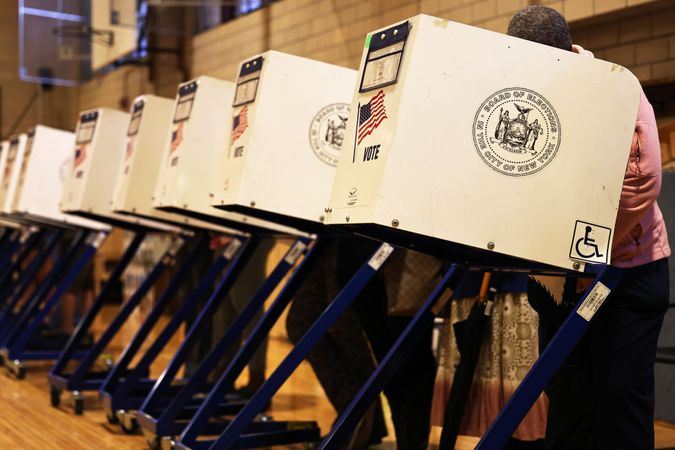 People vote during the Primary Election Day at P.S. 249 The Caton School on June 22, 2021 in the Flatbush neighborhood of Brooklyn borough in New York City. Image by Michael M. Santiago/Getty Images

The final numbers will be released next week and be certified later this month.

The following are preliminary results of races the Forward has been covering:

Brad Lander, a council member from Brooklyn, has widened his lead over his rival Corey Johnson, the City Council speaker. According to the unofficial results, Lander’s 52-48 percentage margin makes it all but certain that he will succeed Scott Stringer, who was the only leading Jewish candidate for mayor, as the city’s most senior Jewish elected official.

Lander, a member of the Kolot Chayeinu/Voices of Our Lives in Brooklyn, had the backing of Senators Bernie Sanders of Vermont and Elizabeth Warren of Massachusetts and New York Reps. Alexandria Ocasio-Cortez, Jerry Nadler and Jamaal Bowman.

Mark Levine, a two-term council member from Manhattan, was declared the next Manhattan borough president. Levine, who served as chair of the NYC Jewish Caucus from 2014-2018, emerged as a prominent voice during the coronavirus pandemic. His chief rival, Brad Hoylman, a state senator representing much of Lower and Midtown Manhattan, conceded on Sunday.

In the Queens borough president race, Donovan Richards, who was elected to the position in a special election last year, seemed likely to win reelection.

In the Bronx borough president race, Vanessa Gibson, a term-limited council member, enjoys a significant lead over her council colleague, Fernando Cabrera, a senior pastor in the New Life Outreach International church in the Bronx.

A record number of women — as many as 28 — will serve in the 51-member legislative body and hold the majority of seats for the first time in history. Jewish representation will decrease significantly compared to the current council and be slightly lower than the proportion of Jewish New Yorkers.

The Council will also, for the first time, have at least four members who are aligned with the Democratic Socialists for America. The group’s local chapter, currently represented by seven members in the state legislature, has worked to increase its influence in city politics.

Tiffany Cabán, a progressive former public defender who lost in the close race for Queens district attorney against Melinda Katz in 2019 (District 22); and Alexa Avilés, a community organizer in South Brooklyn (District 38), are two of six candidates who earned the DSA’s endorsement in this year’s election after signing a pledge not to travel to Israel on an educational trip if elected. The DSA later clarified that its pledge referred specifically to annual trips sponsored by the Jewish Community Relations Council.

Shahana Hanif, a Bangladeshi-American activist who didn’t get the endorsement despite being a DSA member, will replace Brad Lander in the 39th District, which includes the Park Slope and Borough park neighborhoods of Brooklyn.

Kristin Richardson Jordan, another DSA member who pledged not to travel to Israel, is locked in a dead heat with incumbent Bill Perkins in the 9th District.

In the 1st District, Christopher Marte, who initially filled out the DSA’s questionnaire but decided not to pursue an endorsement, has a sizable lead over his rivals. Marte was targeted by a Super PAC called Common Sense NYC — largely funded by billionaire Stephen Ross — for supporting the Defund the NYPD movement.

Michael Hollingsworth, a DSA-backed candidate who vocally supports the Boycott, Divestment and Sanctions movement, was defeated by Crystal Hudson, a former government staffer and community organizer in District 35. Hudson was backed by the Crown Heights Jewish community, which mobilized at least 2,000 voters. Hudson will make history as the first openly gay Black woman elected to the Council.

Another endorsee, Jaslin Kaur, lost her race in District 23 in eastern Queens to Linda Lee, CEO of Korean Community Services. Kaur, who was a leading candidate among the nine running to succeed Council Member Barry Grodenchik, raised concern among mainstream Jewish leaders who took issue with her stance on Israel. She was supported by The Jewish Vote, a progressive Jewish political group.

A recent Forward survey, in partnership with New York Jewish Agenda, showed that a majority of candidates would continue the tradition of traveling to Israel and the occupied West Bank if elected and oppose BDS. None of the DSA-endorsed candidates responded to the questionnaire.

Kalman Yeger, a Brooklyn councilman who called out some of his colleagues for engaging in antisemitic rhetoric in a speech last year, and who was removed from his post in the council’s immigration committee in 2019 following a tweet in which he wrote, “Palestine does not exist,” said he is taking a “wait and see” approach with those elected who will not travel to Israel. “I like to believe that most people are not antisemites, and claiming to be a socialist or even not being interested in visiting Israel does not necessarily make you an antisemite,” he said. “But it has been my experience that people who hate Israel typically hate Jews and simply use Israel as a proxy to cover for their antisemitism.”

At least seven members on the next Council are Jewish.

Julie Menin, a non-profit executive who served as the city’s census czar last year, scored a win in District 5.

Lynn Schulman, a longtime LGBT activist, appeared to be the likely winner in District 29 to succeed Councilwoman Karen Koslowitz.

Lincoln Restler, a former City Hall staffer, won a decisive victory in District 33, which includes the heavily Hasidic neighborhood of Williamsburg. Restler, who will succeed term-limited Council Member Stephen Levin, received the support of both the Orthodox voting blocs and The Jewish Vote.

Ari Kagan, a longtime Russian-American leader, is leading his rivals in District 47, which includes the Russian community in Brighton Beach.

Steven Saperstein, a local community activist, is leading in District 48, which was represented by Council Member Chaim Deutsch, who was ousted earlier this year after pleading guilty to tax fraud charges. Heshy Tischler, who pleaded guilty for inciting a mob against this reporter last year, received 5% of the vote.

The only incumbent, Kalman Yeger, is running unopposed. He does not participate in the Jewish Caucus, which is now headed by Eric Dinowitz, who represents the 11th District.

Dinowitz, a former public-school teacher and member of a Jewish all-male a cappella group, won a full first term after winning a special March 23 election to replace Andrew Cohen, who vacated the seat early after winning a state Supreme Court judgeship last November.

In the 5th District, on the Upper East Side, attorney Julie Menin is expected to succeed Ben Kallos, who is term-limited and previously served as vice chair of the NYC Jewish Caucus.

Carmen De La Rosa, a member of the state Assembly who supports state funds for private schools and yeshivas, is expected to represent the 9th District, which includes the Washington Heights neighborhood that is home to Yeshiva University’s main campus.

Jeff Leb, treasurer of the Common Sense NYC and Voters of NYC, said he was satisfied that 75% of the 32 candidates the PACS supported won. They spent a total of $2.5 million in this year’s election cycle.

“Most importantly, most of the candidates who were supportive of defunding the police lost their elections, thanks to our intervention — sending a clear message that public safety is critical to the future recovery of New York City,” he said.

The Jewish Vote, which serves as the electoral arm of Jews for Racial & Economic Justice, noted that at least 18 of their endorsed candidates won their races. The group, which was formed in 2018, endorsed over 40 candidates, some in a ranked-choice slot, in 28 races.

“The name ‘The Jewish Vote’ was always somewhat tongue-in-cheek,” Audrey Sasson, JFREJ’s executive director, told the Forward on Tuesday. “But part of our goal was to change what people understand “the Jewish vote” to be.” She said the next City Council will better understand it to be more about social justice issues than whether a yeshiva can avoid scrutiny or whether boycotts should be condemned.