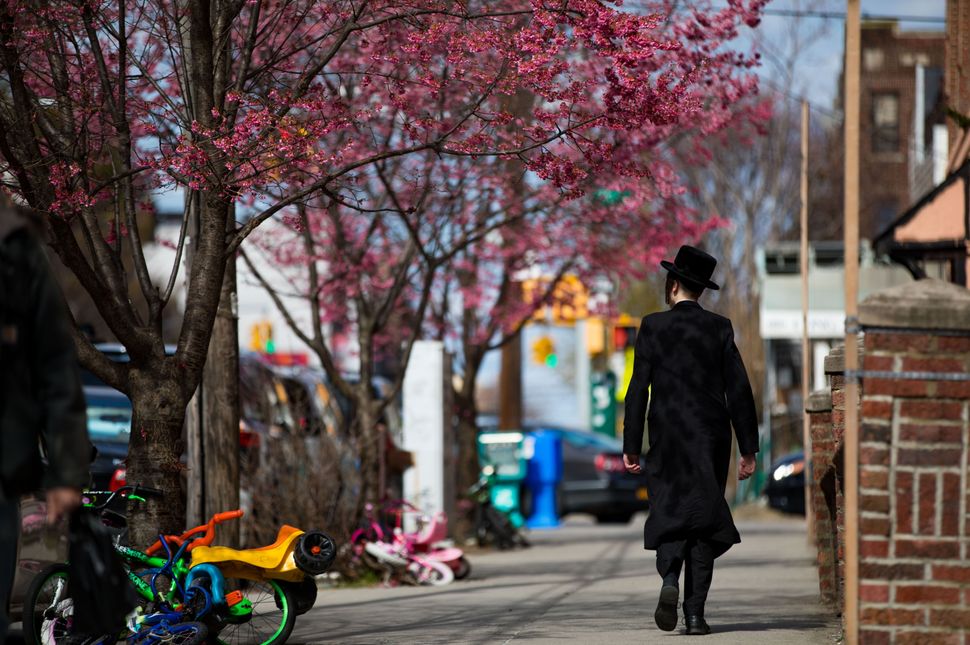 As they crisscrossed the five boroughs in the final days and hours before Tuesday’s primary, leading candidates for mayor made their final pitches to Jewish voters, an often key constituency in New York elections.

Scott Stringer, the city’s comptroller, rallied with Jewish supporters on the Upper West Side on Saturday; Maya Wiley, a former counsel to Mayor Bill de Blasio, joined a havdalah service with members of Jews for Racial & Economic Justice at Grand Army Plaza in Brooklyn; Andrew Yang, a former presidential candidate, rallied with his Jewish supporters in Bensonhurst on Monday morning; Kathryn Garcia, a former city sanitation commissioner, visited a food pantry in Borough Park; while Eric Adams, Brooklyn’s borough president, snagged another endorsement and reminded members of the Orthodox community in a radio interview that he is an old friend they can count on.

NYC MAYORAL ELECTION What’s at stake for the Jewish community? Tuesday at 12 p.m. with Jodi Rudoren, the Forward’s editor-in-chief, and Jacob Kornbluh, senior political reporter, Matt Nosanchuk of NY Jewish Agenda and other special guests. Join on Facebook or YouTube.

The official results of Tuesday’s election are not expected to be known until mid-July. However, the Board of Elections will release the unofficial first choice results on election night, which will include early voting and in-person primary day voting, excluding absentee ballots.

Experts estimate that New York’s 1.1 million Jews make up about 20% of the electorate in Democratic primaries, which most often decide the winner in the heavily-Democratic city. A recent poll suggested 16% of likely voters in Tuesday’s mayoral primary are Jewish. Historically, they have proved a powerful and even decisive factor in mayoral elections — just one example: Mayor Ed Koch, who was Jewish, lost the competitive primary in 1989, to David Dinkins, in part due to Koch’s loss of Jewish support — particularly among the approximately 80,000 voters in Brooklyn’s Haredi communities, where rabbinical leaders’ dictates on candidates can lead to a reliable bloc of votes. A recent poll showed Yang with 47% and Adams with 31% support among Orthodox voters.

Both Adams and Yang have earned the support of leading Hasidic voting blocs in Brooklyn, with most of them choosing the other candidate as second choice in the new ranked-choice voting system. Garcia also received a number of second-choice recommendations, while Wiley has the support of The Jewish Vote, a leading Jewish progressive group.

The ranked-choice experiment, which was implemented to eliminate the need for runoff elections, asks voters to make up to five choices on their ballots. If no single candidate wins 50% of the first-choice votes, the candidate with the fewest first-choice votes is eliminated and those ballots reallocated to their voters’ second choices. That process continues, with third-, fourth- and fifth-choices used when second-choice candidates have already been eliminated, until one candidate wins more than 50%.

The new system makes it worthwhile for the mayoral hopefuls to aggressively pursue first-choice endorsements because a few thousand votes can assure they’re not eliminated early, explained Jerry Skurnik, a political consultant who worked for Koch. But ranked-choice voting also advantages voting blocs in that they can recommend multiple candidates — and avoid burning bridges with a number of potential victors.

“They now get a couple of bites at the apple that they didn’t have before,” said Sid Davidoff, a former top aide to Mayor John Lindsay.

Over the weekend, Yang and Adams increased their get-out-the-vote efforts by touting their commitments to defend the community’s religious rights.

In an interview on the Talkline Network, a popular Orthodox radio show, Yang reiterated his pledge from earlier this year not to interfere in the yeshiva education system to enforce New York’s secular standards. “Government should be paying attention to the schools that the government is solely responsible for, and funding, that are failing people,” Yang said. “Why would we be paying attention to a school in a community that is educating its kids in a way that is working for them, as opposed to the schools that we’re responsible for?”

“I’m not sure exactly why there’s this unfairness towards the Jewish community on this front,” he added.

Adams, who has recently said he came away impressed by the level of secular education after visiting a Brooklyn yeshiva, said in an interview with Kol Satmar, a news hotline that is affiliated with the Satmar community led by Rabbi Aaron Teitelbaum of Kiryas Joel, “Your way of life is important to you, and you have my promise that I’m never going to impact on your way of life.”

“That is the beauty of this city and the beauty of this country, that we can have our culture, our understanding of the education of our communities without any interference from the government,” Adams added. “And I believe it’s important that the next mayor does not get in the way of your way of life.”

On Monday afternoon a number of Lower East Side rabbis announced their support for Adams.

Meanwhile, a new political action committee formed by a group of former yeshiva students and parents launched a campaign to oppose the candidacy of Yang and Adams because of their stance on yeshivas. The group, called “Voters for Substantial Equivalency,” sent out a million robocalls and 250,000 text messages to voters across the city on Monday urging them to not rank either Adams or Yang on their ballot. “My child cannot afford to have Eric Adams or Andrew Yang as mayor,” Beatrice Weber, a parent of an eight-year-old yeshiva student, said in one of the recordings obtained by the Forward. “Yang and Adams have both made deals with ultra-Orthodox rabbis in exchange for the Hasidic bloc vote and will allow tens of thousands of children to be denied an education in even basic math, science and American history.”

In recent days, Yang and Garcia formed an alliance, campaigning together across the city to urge voters to rank them second if not first. In the Saturday interview, Yang said that he found Garcia to be “a very reasonable, rational person and a moderate on most of the issues that the Orthodox Jewish community cares about.” But two local elected officials with strong connections to the Orthodox community who endorsed Yang — Councilman Kalman Yeger and Assemblyman Simcha Eichenstein — ranked Adams as their second choice in statements on Sunday.

Garcia, who served as the city’s food czar during the coronavirus pandemic, visited the neighborhood of Borough Park in Brooklyn on Monday afternoon to secure some first and second choice votes. In a previously unannounced stop at the Masbia Soup Kitchen, Garcia pointed to the high-quality kosher meals that she helped Orthodox families receive as part of the city’s COVID-19 relief program. They’re an example, she said, of her experience in government and understanding of the community’s needs.

“I am here the day before Election Day because I do want the people in Borough Park to know that I am asking for their number one vote,” Garcia said in a video message. “If you’ve fallen in love with someone else though, make me your number two.”