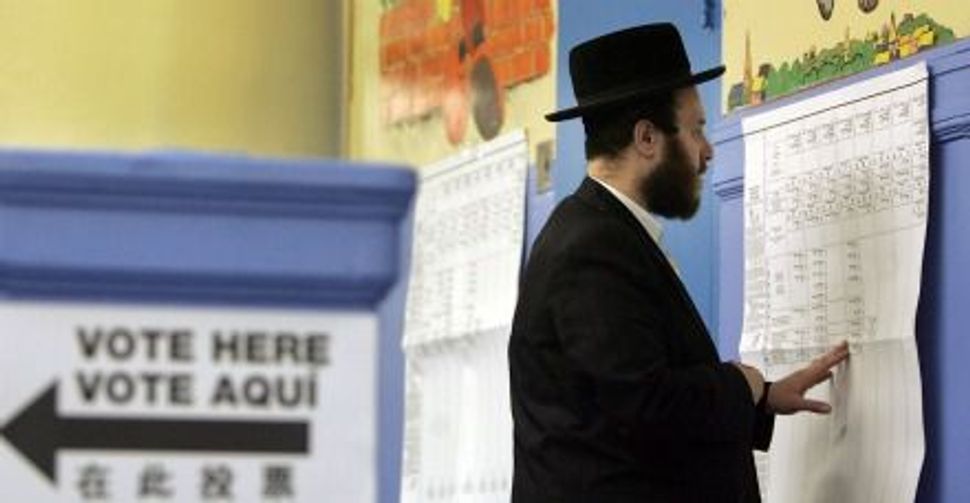 Concentrated Influence: Orthodox Jews say they want new districts so leaders will answer to them alone, not the broader community. Image by getty images

Eric Adams and Andrew Yang, two of the leading candidates for mayor of New York City, have stepped up their get-out-the-vote efforts in the Orthodox community in Brooklyn as early voting in the June 22 Democratic primary is underway.

Both campaigns are touting their commitments to work with the community, protect its rights and enhance its safety in colorful ads in weekly newspapers, on posters in local synagogues, in personalized text messages sent to voters and with visits to influential rabbis.

Experts estimate that New York’s 1.1 million Jews make up about 20% of the electorate in Democratic primaries, which most often decide the winner in the heavily-Democratic city. There are approximately 80,000 voters in Brooklyn’s Haredi communities, where rabbinical leaders’ dictates on candidates can lead to a reliable bloc of votes. A recent poll showed Adams with a solid 11-point lead among all voters, and Yang in second place with 15% support.

Yang, an entrepreneur and former presidential candidate, is backed by the leading Hasidic sects in Borough Park and WIlliamsburg, including the Bobov community and a portion of the Satmar community led by Rabbi Zalman Leib Teitelbaum. Adams, Brooklyn’s borough president, has earned the support of the other Satmar faction led by Rabbi Aaron Teitelbaum of Kiryas Joel, the Flatbush Jewish Community Coalition, the Crown Heights Jewish community, the Far Rockaway Jewish Alliance and a coalition of Bukharian Jewish activists in Queens, among others.

Both candidates are trying to build upon their endorsements with emotional appeals that each hopes will give them an edge over the other.

At the final televised debate on Wednesday, Yang described a recent shiva call to a member of the Orthodox community in Brooklyn as his worst moment on the campaign trail. “Consoling a parent who lost his son,” Yang said when asked by the moderators to share his worst experience. A Yang campaign aide confirmed that he was referring to a shiva call he paid to the Knoblowitz family who lost their son, Pinchas Menachem, in the Mount Meron tragedy on April 30. “I am a dad of two boys and I imagined myself in his shoes,” Yang said. “Comforting him felt like a blessing, but it was a very tough experience.”

Adams has promised to be a fierce fighter against antisemitism. He has brushed off critics who noted his praise of Nation of Islam leader Louis Farrakhan in the early 1990s, by pointing to his Jewish support. “I do not support any antisemitism,” Adams told an activist after the debate on Wednesday night, naming a number of groups who are backing him. “They know my work, I am a solid guy.”

Former Assemblyman Dov Hikind said in a video published on Thursday that he recently met with Adams and that the candidate acknowledged that his past defense of Farrakhan was a mistake. “But I wish he would share it with the general public because there are people who are concerned,” Hikind said.

Adams and Yang both visited Rabbi Aaron Teitelbaum of Satmar on Tuesday for a blessing. Adams, who is backed by the faction’s leadership in Williamsburg, told the rebbe, “Your community is my family and friends.” He also said he was impressed by the yeshiva education system and said he hopes that standards at the public schools will become substantially equivalent to the secular studies at the yeshivas, according to two sources who were in attendance.

A recent poll conducted by JP News, an Orthodox online new site, and shared with the Forward, showed Yang with a significant lead over Adams for first choice. The poll of 1,106 registered voters – conducted by phone and online – showed Yang with 47% of support among voters who identify themselves as Orthodox or Hasidic, while Adams got 31%; and 11% remained undecided.

Hikind, who also met with Yang, said both Yang and Adams were reassuring about combating the rise in antisemitism and that both would be considered allies if elected.

Meanwhile, a poll of 876 likely Democratic primary voters, conducted by the Marist Poll, showed New York Jews equally split between the five leading candidates, with Kathryn Garcia, a former NYC sanitation commissioner, leading the pack with 26% of support. Adams is in second place with 18%, followed by Maya Wiley, whose partner, Harlan Mandel, is Jewish, with 15%.

In 2013, de Blasio barely avoided a run-off by winning more Jewish voters than his competitors.