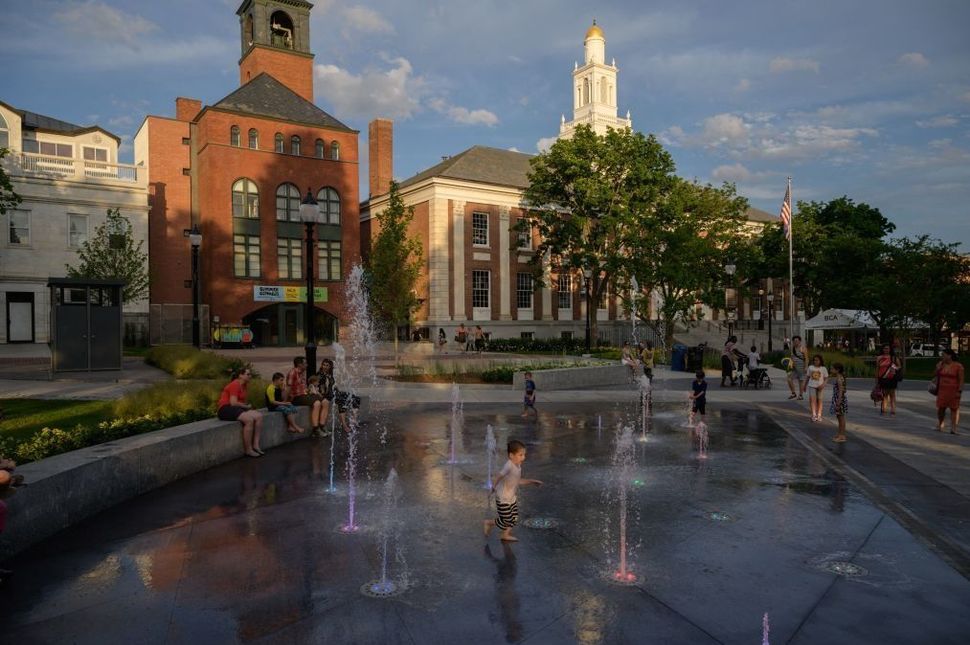 Burlington, Vermont’s largest city, would become the first in the nation to support the Boycott, Divestment and Sanctions movement against Israel if its city council approves a proposed resolution at its meeting Monday evening. While cities including Portland, Oregon; Berkeley and St. Louis have divested from specific companies targeted by pro-Palestinian activists, Burlington would be the first to endorse BDS itself, a movement many see as advocating for the elimination of the Jewish state.

That prospect has alarmed some Jewish community leaders in the Green Mountain State, home to roughly 8,000 Jews, who say it will fuel antisemitism.

“People are afraid to be Jewish here, much less pro-Israel,” said one local college student

“We’re scared,” said Rabbi Tobie Weisman, director of Jewish Communities of Vermont. “There’s a feeling like this definitely could pass and it would be a terrible, terrible thing.”

The rabbis of Burlington’s four synagogues wrote a letter Thursday opposing the resolution, calling it “one-sided” and arguing that the BDS movement’s goal was “the elimination of the state of Israel.”

While the resolution does not call on the Burlington government to take any specific steps toward boycotting Israel, it includes an endorsement of BDS and its three demands: an end to the Israeli occupation of “all Arab lands,” meant to include the West Bank, Gaza, East Jerusalem and the Golan Heights; full equality for Arab Israelis; and allowing Palestinian refugees who fled or were forced out of Israel in 1948, and their descendants, to return to the country.

“It’s a symbolic message,” said Wafiq Faour, a member of Vermonters for Justice in Palestine, which lobbied for the resolution. “We use BDS as a tool to educate the public here and to force Israel to do the right thing.”

On Sunday, Dillon Hosier, chief executive of the Israeli-American Civic Civic Action Network, said the sponsor of the resolution, City Councilman Ali Dieng, had told the group he no longer planned to move it forward on Monday. Dieng had not responded to interview requests from the Forward last week.

The push for Burlington to support the Boycott, Divestment and Sanctions movement comes after Ben & Jerry’s, which is based just outside the city, announced over the summer that it would stop selling its ice cream in the West Bank over concerns about Israeli human rights abuses. The company’s decision, which prompted a furious outcry from the American Jewish establishment and Israeli government, came after a decade-long campaign by activists in Burlington and across the state.

While the BDS movement states on its website that “dozens” of local governments in Europe and Australia have endorsed a boycott of Israel, it does not list any in the U.S. The US Campaign for Palestinian Rights has a lengthy list of BDS “victories” at the state and local level, but none include the kind of total endorsement that Burlington, which has roughly 40,000 residents, is considering.

Avi Zatz, a sophomore at the University of Vermont, said activism aimed at Israel has created a hostile environment for Jews on campus and he is worried that passage of the BDS resolution on Monday would make the situation even worse.

“People are afraid to be Jewish here, much less pro-Israel,” Zatz said. He pointed to a teaching assistant who Zatz said posted on Twitter last spring that it would be “good and funny” to not give Zionist students participation credits “cuz i hate ur vibe in general” and a sexual assault survivors group on campus that banned Zionists following the spring violence in Gaza and Jerusalem.

Weisman, of Jewish Communities of Vermont, said some Jewish students at Middlebury College, about an hour south of Burlington, had also been harassed for supporting Israel.

But Faour, with Vermonters for Justice in Palestine, said that it was pro-Palestinian students who faced pressure and opprobrium on Vermont’s college campuses and that the Burlington City Council had an opportunity to reassure both activists and companies like Ben & Jerry’s that they should not be afraid to support Palestinian rights.

Faour dismissed concerns that the legislation could contribute to antisemitism, calling the four rabbis who wrote the letter opposing the resolution “blatant Zionists” and said Vermonters for Justice in Palestine had many Jewish members.

“Every time we go and ask for human rights and equal rights for the Palestinians they’re going to consider it antisemitism or say we are calling for the end of Israel,” Fauor said. “Nothing in that resolution is calling for such a thing.”

Weisman acknowledged that there was disagreement within Vermont’s Jewish community over the resolution, and suggested that was the reason that more of the state’s synagogues and Jewish leaders had not come out against it.

“It is a hard thing for synagogues to do because they feel that their congregants might be in support of this,” Weisman said. “It’s not 100% that we have the Jewish community, 100% behind opposing this.”

Weisman said she is worried that if Burlington endorses BDS other Vermont municipalities like Montpelier, the capital, could follow.

The resolution has failed to attract much public attention so far. While Vermont’s Congressional delegation, including Sen. Bernie Sanders — who is Jewish and spent months as a young man volunteering on a kibbutz — oppose BDS, none appear to have spoken out about the measure. A petition opposing it was organized a week before its scheduled vote.

It is not clear whether the resolution will be approved at the City Council meeting Monday night. The council has 12 members — divided between Democrats, the Vermont Progressive Party and independents — and Zatz said he has only heard back from two, both of whom said they would oppose it.

Faour said that regardless of whether the measure passed, that it was being debated by the Council was a victory in itself.

“We know that we have great public support,” he said.