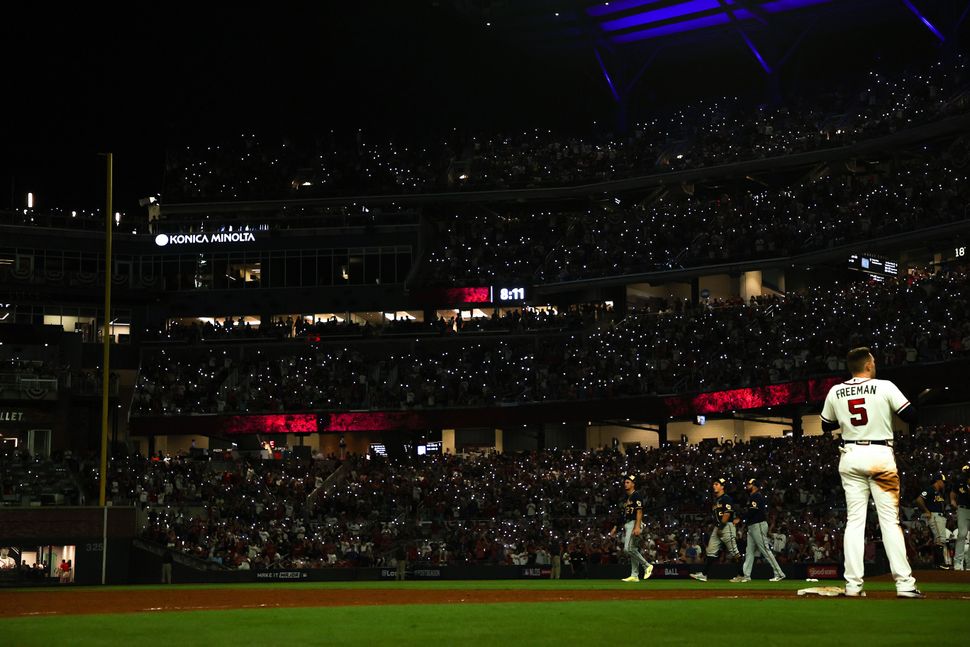 During night games, the Braves’ stadium will dim the lights so fans can do the Tomahawk Chop with their cell phone lights. Native American groups say the chop and war chant are dehumanizing. By Kevin C. Cox/Getty Images

Years ago, when Rabbi Josh Lesser was in college, his dad, a diehard Atlanta Braves fan, invited him to a playoff game. He had splurged for good seats. But Lesser had just spent several weeks on a cultural exchange at the Lac du Flambeau Reservation in Wisconsin, and he dreaded the stadium ritual that many Braves fans love: the tomahawk Chop. Native Americans generally see it as a racist caricature. The future rabbi didn’t want to go.

“It felt really hypocritical to me,” Lesser, 52, said. “But my dad was really insistent.”

Decades later Braves fans still do the tomahawk chop. And it’s all the more visible this week, as the Braves and the Houston Astros head into the third game of the World Series Friday, where the Braves have not made an appearance for 22 years.

Lesser feels the chop is morally wrong, a reflection of the nation’s past and current mistreatment of Native Americans. But an informal survey shows that his view is not necessarily the norm among Atlanta rabbis — of seven contacted, two described it as offensive and the others took a middling position or no position at all, except one, who defended it.

The tomahawk Chop — often called “the chop” — is a back-and-forth motion of the arm, accompanied by a sing-song war chant, and often cued by stadium music and a drumbeat. Native Americans have characterized it as both bigoted and an insensitive appropriation of their culture and all the more offensive in Georgia, where the U.S. government in the 19th century forced thousands of Native Americans off their land and onto the Trail of Tears — for many, a death march.

Baseball fans who defend the gesture see it as a way to generate crowd participation, intimidate the opponent and create a home-field advantage.

The controversy surrounding the tomahawk Chop isn’t new. Native American groups have been calling it demeaning almost from the moment it caught on in Atlanta, in 1991, when the team made the World Series and the franchise started selling foam tomahawks in the team store. In a statement this week calling again for its ban, the head of the National Congress of American Indians labeled the chop “degrading.”

But many Braves fans remain fiercely protective of it, and in the most exciting sports moment in decades for the team, local Jewish leaders are among them.

Rabbi Ilan Feldman, head of Beth Jacob, an Orthodox synagogue in Atlanta, grew up listening to baseball games on a transistor radio and has been going to Braves games for decades. He said he would do the tomahawk chop “every time I have the chance.”

“The whole point of the tomahawk Chop is that a Brave is a courageous warrior for a good cause,” Feldman said, “and therefore it’s honoring Braves, not dishonoring them. It’s saying ‘I want to be like a Brave.’” 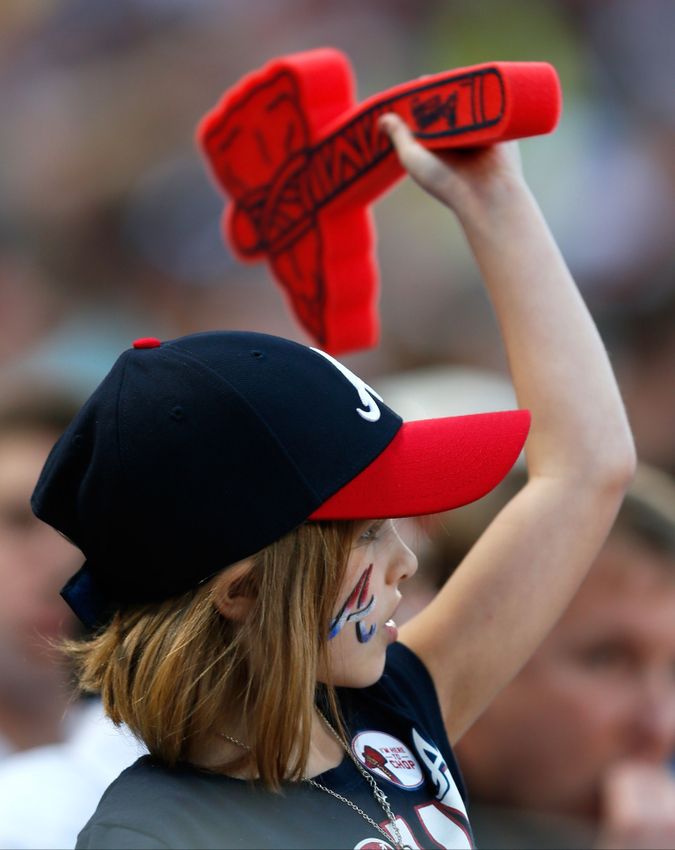 The tomahawk chop is a tradition many Atlanta Braves fans grew up with, and its defenders say there is no intent to offend. By Kevin C. Cox/Getty

The Cherokee Nation, the largest tribe in the United States, sees it differently. In a statement this week the tribe said, “’This does not honor Cherokee traditions, nor do they honor our fellow tribes,” adding, “The 574 federally recognized Native American tribes are each distinct, sovereign governments with their own unique history, culture and language, and should be respected as such, not as stereotypes or mischaracterizations or derogatory terms.”

What does Feldman make of these objections?

“I think it has more to do with rivalry than with some noble devotion to racism,” he said. “Everyone is trying to outdo each other to prove their nobility regarding racism. I realize that makes me a racist — I realize that.”

Feldman offered the only full-throated endorsement of the chop. Other rabbis the Forward contacted, describing themselves as avid baseball fans, did not defend it, but were not ready to cut ties with the tradition, either.

In an email, Lapidus said about the chop, “As with all issues that understandably evoke strong emotions in today’s world, as an educator I encourage individuals to educate themselves on the topic to determine their personal position, with an emphasis on seeking out opinions, perspectives, and narratives different from their own and which challenge their assumptions and comfort.” He said he was not in a position to comment further. 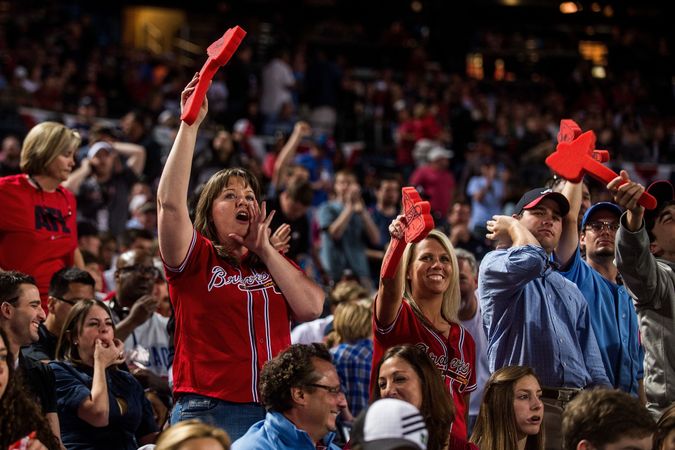 Atlanta Braves fans do the tomahawk chop against the Chicago Cubs at Turner Field in 2013. Native American groups say the gesture is demeaning. By Pouya Dianat/Atlanta Braves/Getty Images

Rabbi Adam Starr, head of Congregation Ohr HaTorah, an Orthodox synagogue in Atlanta, is bringing his son to Sunday’s Game 5, their second game of the postseason. When it came to the chop, the rabbi declined to take a stance.

“These issues are certainly complex,” Starr said. “I grew up a, what-was-then, the Washington Redskins fan. So there has to be some sensitivity on these issues. I don’t know how it’s perceived by the Native American community. I think it’s something that needs to be explored, but I can’t say definitively one way or another at this point.”

Rabbi Daniel Dorsch has been head of Atlanta Conservative synagogue Congregation Etz Chaim since 2016, and was reticent to weigh in on the chop, he said because he is new to town and a fan not of the Braves, but of the Philadelphia Phillies.

“Am I aware in general that this is something that would in general be problematic? Of course,” Dorsch said.

Told of some Native groups’ recent condemnations of the gesture, the rabbi wasn’t ready to deem the chop inherently offensive. In any event, Dorsch said, the idea of taunting an opponent was troubling.

“From my perspective, just the whole idea of taunting seems rather un-Jewish, and unfortunate, and not in conjunction with our values. That’s what I’ll say.”

Out of six Atlanta rabbis who responded to the Forward’s request for comment on the chop, only Lesser and Rabbi Ron Segal, who leads Temple Sinai, a Reform congregation, railed unequivocally against it as a derogatory gesture. (A seventh, Rabbi Rachael Klein Miller of Temple Emanu-El, declined to comment.)

Segal, whose synagogue has a wager for charity with a Houston counterpart, said Jewish people doing the chop runs counter to their intense focus on fighting antisemitism.

“We still have teens and others who encounter slights in their school and stereotypical prejudicial treatment,” Segal said, “and each time we perpetuate things like that it reflects such insensitivity and blindness to our own experience.”

Would he call the chop racist?

“It is based on racist stereotypes, for sure,” he said. “That is what those actions are at their core — what their origins are entirely based upon.”

As for Jewish communal groups, the Atlanta chapter of the American Jewish Committee was measured in its response. In a statement, regional director Dov Wilker said, “We believe that concerns from the Native American community should be heard and discussed.”

The Atlanta chapter of the Anti-Defamation League referred questions on the topic to a national spokesperson, who said in an email, “Our position for nearly a decade is that sports teams should reconsider team names, mascots and imagery based on Native American stereotypes.”

Segal, the Temple Sinai rabbi, said he was confident his rabbinical colleagues had no racist intent, and suggested two reasons people might not want to call the chop out as offensive.

“Either there’s an understanding or perception that those are now so commonplace and mainstream that they’re not really attached to a particular people or intended as a slight,” he said, “or, you know, you have a team in the World Series for the first time in 22 years, and why would you want to rain on their parade?”

When Lesser’s father brought him inside the Braves’ stadium that night in 1991, they were quickly enveloped by hordes of fans holding foam tomahawks sold at the team store. When they started the chant, he groaned. But his dad considered himself a progressive, and hoped to convince his son that the chop was morally permissible. He pointed to former President Jimmy Carter, a Georgia native known as a bleeding-heart liberal, doing the chop in his suite. It only disappointed his son.

When Lesser got back to school that fall, he started a Native American-Jewish partnership at the college Hillel. He said he plans to lend his voice at the first meeting of a similar coalition organized by Repair The World Atlanta, a Jewish social justice group.

These days, the rabbi thinks of the Carter moment as a reminder that everyone — himself included — has room for growth.

“I know people think it’s fun,” Lesser says. “But when we look at our true commitments, it’s fun that we can give up.”