Fried as a Bird: Max Fried of the Atlanta Braves throws a pitch during the third inning of Game Five of the National League Championship Series against the Los Angeles Dodgers at Dodger Stadium on October 21, 2021 i By Getty Images

The immediate narrative surrounding the 2021 World Series between the Atlanta Braves and the Houston Astros is that it matches teams that no one outside their respective fan bases wants to root for. The Astros are one year removed from being exposed, although largely unpunished, in the largest sign-stealing scandal in baseball history (one’s anger about that may depend on views about sign-stealing and baseball’s other “unwritten rules”) that made the arrogant organization a universal villain.

Meanwhile, the Braves have a racist nickname and fans participate in a racist chant that the team has done nothing to discourage. The team recently manipulated political processes to secure a publicly-financed stadium in a suburban county without easy transportation access for the people who live in the city that gives the team its name.

One group is happy with this match-up, however — Jews. Baseball has gifted us the most Jewish Series in history. Consider:

This is the second Series with three Jewish players on active rosters, the first with multiple Jewish players on each team, and the first in which three Jewish players should appear. The Braves have left-handed starter Max Fried and outfielder Joc Pederson, who are among the best pairs of Jewish teammates, while the Astros have third-baseman Alex Bregman. Bregman and Fried had Bar Mitzvahs. The previous record was in 1959, when the Los Angeles Dodgers had pitchers Sandy Koufax and Larry Sherry (who won Series MVP) and the Chicago White Sox had pitcher Barry Latman, who did not appear in the Series. We missed a four-Jew Series when the Astros left third-string catcher Garrett Stubbs off the roster, just as the ’59 Dodgers left off Sherry’s brother Norm, a catcher for the team.

Fried is in his third season as a starter. He won 17 games in 2019 and went 7-0 in COVID-shortened 2020. He started slowly in 2021 but emerged as the Braves ace in the second half of the season, winning his last seven decisions and posting a 1.55 earned-run average over his last 14 starts. He should start Game 2 and 6, if the Series lasts that long 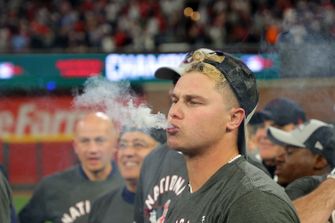 Where There’s Smoke: Joc Pederson #22 of the Atlanta Braves celebrates after defeating the Los Angeles Dodgers in Game Six of the National League Championship Series at Truist Park on October 23, 2021 in Atlanta, Georgia. The Braves defeated the Dodgers 4-2 to advance to the 2021 World Series. By Getty Images

Pederson is part of a four-man outfield rotation, starting against right-handers and pinch-hitting. He joined the Braves midseason following a trade from the Cubs, hitting seven homers in 64 games (18 for the year). He has been enjoying another Joctober, with three homers and nine runs batted-in in ten postseason games, while wearing a pearl necklace that has captured public imagination.

Bregman is two seasons removed from an MVP-runner-up season. He played only 91 games in 2021 due to injuries but played well upon his September return in helping the Astros’ stretch run. Barring injury, Bregman will start every game.

Stubbs is the Astros’ third-string catcher, playing in 18 games this season. He is unlikely to see action in the Series. 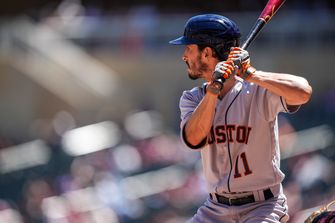 Third-String Catcher: Garrett Stubbs is unlikely to see action in the Series. By Getty Images

Pederson and Bregman are World Series veterans; this is Pederson’s fourth Series and Bregman’s third, each having won one. They share the record for most World Series home runs by a Jewish player, with five. They faced off in the 2017 Series when Pederson played for the Dodgers, the Astros winning in seven games. Pederson homered three times and had an OPS of 1.344, while Bregman homered twice (one walk-off) and had an OPS of .739.

Given how late in October the Series begins, it does not conflict with any Jewish holy day other than Shabbat and does not trigger questions about whether anyone will or will not play. We can focus on how Jewish players perform on ordinary days.

This four-Jew Series involves an unexpected match-up. The Braves won 88 games, fewest among six NL postseason teams. The Braves’ record did not move above .500 until Aug. 6, the latest a World Series team has crossed that threshold. They seized control of the National League Championship Series against a 106-win Dodger team by winning the first two games at home in their final at-bats after trailing in both games, then taking advantage of a depleted and tired Dodgers roster and pitching staff. And closing the series required them to overcome the ghosts of blowing 2-0 and 3-1 series loads to those Dodgers in the 2020 NLCS.

The Astros’ 95 wins were second-most in the American League. But in the ALCS, they trailed the Boston Red Sox two games to one and trailed Game 4 with two outs in the eighth inning, before tying the game — helped by a controversial non-strike call — and blowing the game open in the ninth. From the eighth inning of Game 4 to the end of the series, the Astros outscored the Red Sox 22-1.

Perhaps this Series is the match-up Hashem wanted.

Howard M. Wasserman is professor of Law at FIU College of Law. He is the author of “Testing the Koufax Curse: How 18 Jewish Pitchers, 18 Jewish Hitters, and Rod Carew Performed on Yom Kippur.’