‘There’s not going to be closure’: Charlottesville rabbi grapples with far-right trial 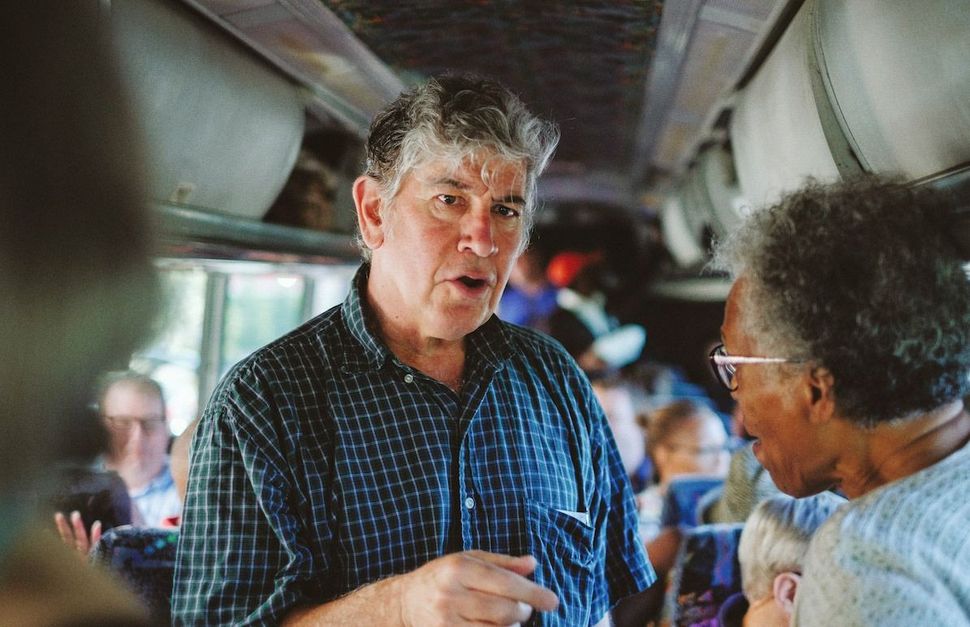 Rabbi Tom Gutherz of Charlottesville’s Congregation Beth Israel hates the story about how he and his members left via the back door that Shabbat morning in 2017 as white supremacists marched on the streets out front.

It’s technically true. The synagogue had started services an hour early so they’d be done before the “Unite the Right” rally began. Jefferson Street, where its front doors open onto, was already clogged with far-right demonstrators and police officers. So, yes, congregants used a side entrance to leave. But they weren’t fleeing.

“We didn’t run out the back door,” Gutherz said in an interview at the shul on Thursday, during the second week of a civil trial accusing 14 men and 10 groups of conspiring to commit racist violence with the rally. “People said, ‘Nazis are coming to town? I’m going to synagogue this week.’”

Beth Israel sits in a two-block stretch between parks that once held statutes of Robert E. Lee and Stonewall Jackson in Charlottesville’s modest downtown. Those statutes began drawing the attention of white nationalists like Richard Spencer in 2017, months before Unite the Right, the notorious August rally that left one counterprotester dead and dozens injured.

The local Jewish community had gotten an inkling that their city was becoming a magnet for antisemites a few months earlier. A member of the shul who is an amateur photographer had walked to the Jackson statue after services one Shabbat to check out a small group of men gathered around it. When they noticed his yarmulke, the rabbi said, they began shouting slurs at him. 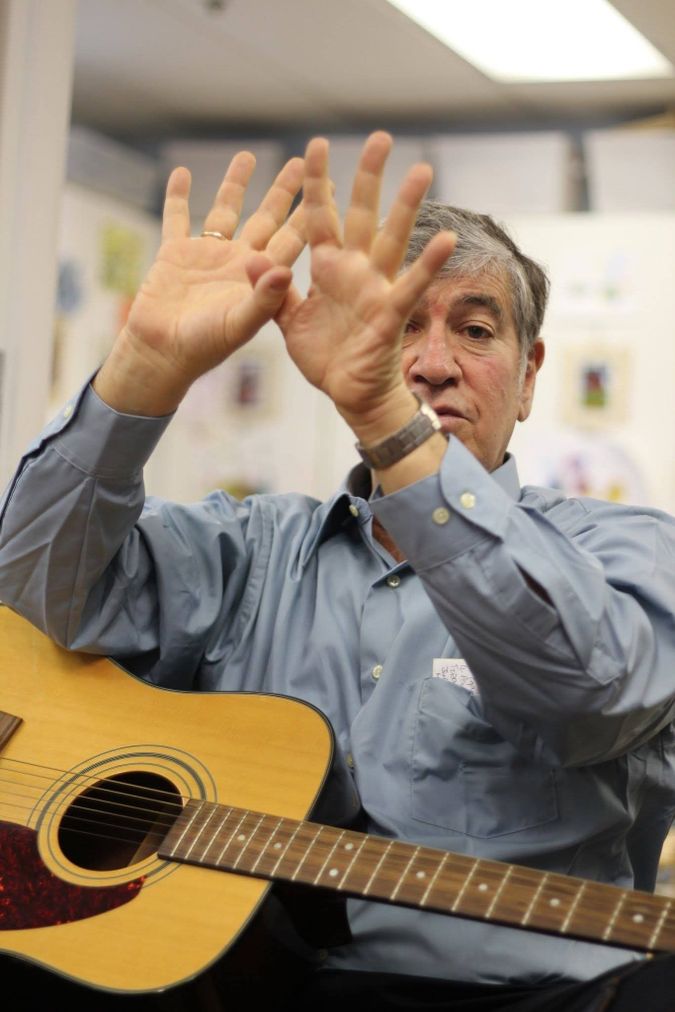 Some weeks later, the Ku Klux Klan held a rally near the Lee statue. Beth Israel members were among the Charlottesville residents who showed up to counter-protest, and they were stunned to see the Klan members waving antisemitic signs.

“Ostensibly they were here for the monuments,” Gutherz recalled. “That was the first time we were like, ‘What? Where’s the Jewish piece here?’”

The renowned Holocaust historian Deborah E. Lipstadt had outlined the answer to that question on Wednesday inside Charlottesville’s federal courthouse. Testifying in support of nine plaintiffs who contend their civil rights were violated by the alt-right organizers and leaders of the rally, Lipstadt broke down obscure Nazi symbols used by the protesters and explained how replacement theory — which claims Jews are working with other racial minorities to marginalize white people — connected the racism and antisemitism of white nationalists.

Sitting in his office the next day just down the hall from the synagogue’s infamous side door, Rabbi Gutherz, a 64-year-old native of Cleveland who was sporting a purple sweater and shock of graying hair, said Beth Israel’s 400-plus member families had to learn those same lessons in the immediate aftermath of the 2017 event. That reckoning took place as they were plunged into a nonstop news cycle, with television cameras replacing neo-Nazis on the sidewalk outside.

Gutherz’s colleagues at African American churches balked when Charlottesville’s civic leaders suggested that the racism at Unite the Right was a foreign import to their southern university town. That pushed Beth Israel, which is Charlottesville’s central synagogue and affiliated with the Reform movement, to start talking about systemic racism years before last year’s Black Lives Matter movement forced a reckoning across the Jewish community.

“It accelerated our process of digging a little deeper into white supremacy, what the movement was about, and what they are the tip of,” Gutherz said. Perhaps the most tangible manifestation of that process was an interfaith civil rights pilgrimage in 2018 from the site of a Charlottesville lynching to a memorial for the killings in Montgomery, Ala.

These new connections with other clergy also forced Gutherz, who has been at Beth Israel since 2005, to answer difficult questions about how to stem racist violence against those who, unlike most Jews, cannot easily conceal their identity.

When a local group of pastors prepared to release a statement of solidarity after the Pittsburgh synagogue shooting in 2018, he recalled, one leader asked whether the group would also say something about the prior week’s deadly shooting in Louisville. In that case, the killer tried in vain to enter a Black church, and instead went to a grocery store, where he gunned down a Black man and a Black woman while telling a white bystander, “whites don’t shoot whites.”

“What’s the takeaway from that? Are you going to put security guards outside Kroger?” Gutherz asked. “African Americans are targets everywhere.” 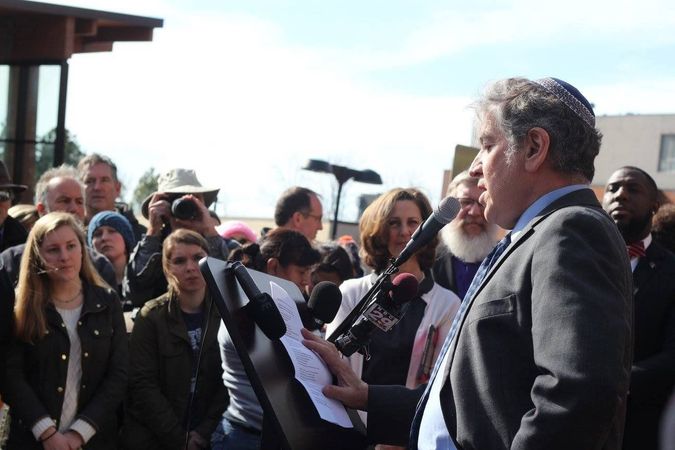 Beth Israel also built relationships with local activists who have been monitoring white supremacist activity in the area. These activists came to guard the synagogue when Spencer, perhaps the most notorious far-right leader of the Trump era, organized a second gathering at a nearby park during the Sukkot holiday, less than two months after Unite the Right. Gutherz said that the activists would tip off synagogue leaders whenever the handful of defendants who faced criminal charges as a result of the rally were in town for hearings. Four members of a white supremacist gang based in California ultimately plead guilty to violating federal riot laws, as did James Fields Jr., who killed counterprotester Heather Heyer with his car.

Gutherz, who previously worked at a Reform congregation in Lynchburg, Virginia — home to the evangelical Liberty University — said he learned about the Pittsburgh synagogue shooting from strangers who showed up to services carrying flowers to share condolences.

But all that — the introspection, the support, the relationships forged with anti-Nazi activists — never seemed to break through the noise that Unite the Right generated.

He started fielding calls from Jewish families who wanted to move to Charlottesville but wondered if it was safe. Yes, he says. While there was some hostility against Jews generations ago — including the federal government’s demolition of Beth Israel’s first building to build a post office in the late 1800s — the community has been thriving since Jews gained a foothold at the University of Virginia starting in the 1960s.

The congregation has only grown since Unite the Right, with some previously unaffiliated Jews going out of their way to join in response to the antisemitism. There’s also a Jewish Renewal minyan in town, and the university is home to a Hillel and Chabad House, as well as a robust Jewish studies department. Charlottesville’s downtown commercial strip, which has been free of cars since the 1970s, was designed by the famed Jewish landscape architect Lawrence Halprin.

Gutherz was ordained in 1993 after a first career working on a kibbutz in Israel. He takes pride in the Beth Israel’s preschool, youth group and robust adult education.

“We like to call it a big-city synagogue in a small town,” he said.

But Gutherz has no illusions about moving on from Unite the Right. The civil trial in federal court has brought many of the country’s top white supremacists back to town, and police tape and federal marshals are guarding the federal building where the proceedings are taking place — only eight blocks from the synagogue.

Christopher Cantwell, known as the “crying Nazi,” has been using the trial to make light of the Holocaust and fete Adolf Hitler.

The trial is expected to wrap up before Thanksgiving, but that won’t offer a tidy resolution to Charlottesville’s Jews. The movement that broke into public consciousness here four years ago hasn’t disappeared, Gutherz said, with tropes about nefarious Jews plotting to undermine conservative white America continuing to percolate. That can’t be stemmed regardless of what the jury decides.

“There will be gratitude that these people who are really violent and hateful people will be held accountable for their actions,” Gutherz said. “There’s not going to be closure.”

CORRECTION: The original version of this article incorrectly identified one of the statues that used to stand in a park near Charlottesville’s Congregation Beth Israel.

‘There’s not going to be closure’: Charlottesville rabbi grapples with far-right trial