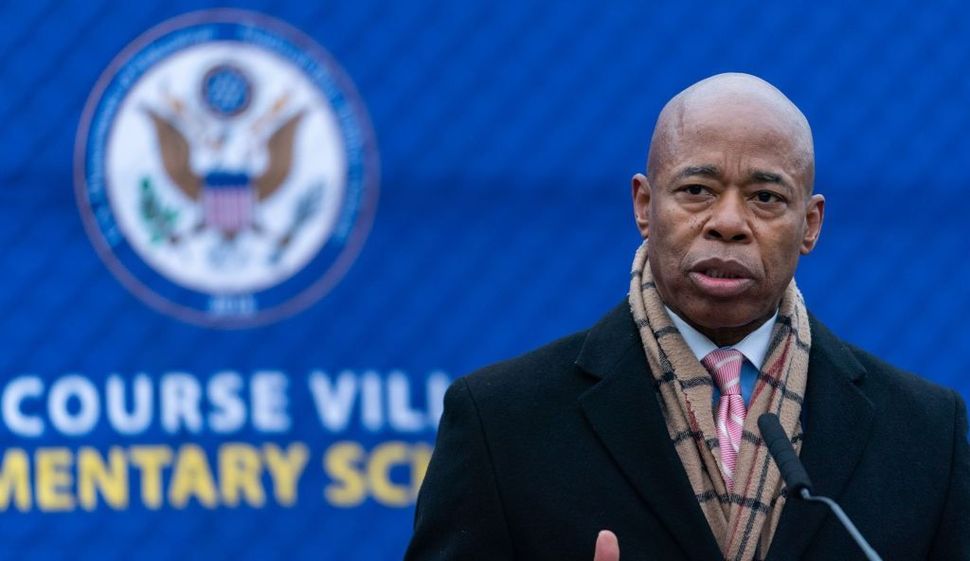 Mayor Eric Adams on the first day of students returning to school on Jan. 3, 2022. Image by Jeenah Moon/Bloomberg via Getty Images

Eric Adams, the new mayor of New York City, has appointed three Jews — including two members of the Orthodox community — to senior positions in his administration.

Adams, who won the mayoral race last year thanks to a coalition of Black, Latino and Orthodox voting blocs, pledged to focus on efficiency when he took office Saturday. He dubbed his first 100 days in office the “get stuff done” period.

Here is a look at the experience and relationships these three staffers bring to City Hall:

Mermelstein, 55, was born in Ukraine when it was still part of the Soviet Union and emigrated to the U.S. at age 9. He is a prominent real estate attorney with a focus on foreign investments. 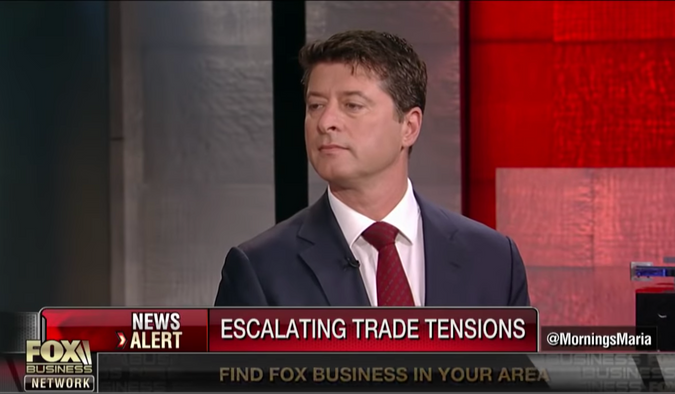 Mermelstein has deep ties to the Russian Jewish community. He is chair of the Council of Jewish Émigré Community Organizations, an umbrella group representing Russian-speaking Jews. He recently served as president of ZAKA Search and Rescue, an Israel-based humanitarian volunteer group that helps in mass casualty disasters. In 2019 he was honored as grand marshal of the annual Celebrate Israel parade in Manhattan.

His new city job has been described as much like that of a country’s foreign minister. The agency serves as a global platform to promote New York and build partnerships abroad.

Jonathan Greenspun, a community leader and former official in the Bloomberg and Bill de Blasio administrations, said Mermelstein will assume the “highest position ever given to a member of the Russian-speaking community in the New York City government since the mass emigration of Jews from the former Soviet Union.”

Jennifer Falk, executive director of the Union Square Partnership, who is co-chair of the Celebrate Israel parade, said that Mermelstein’s philanthropic activities and involvement in Jewish communal affairs will bring a “level of prominence” to the position.

Kreizman, 43, previously served as an assistant commissioner for the agency and was also liaison to the Jewish community. In the 2020 Democratic presidential primary, Kreizman was a member of Bloomberg’s Jewish leadership team. 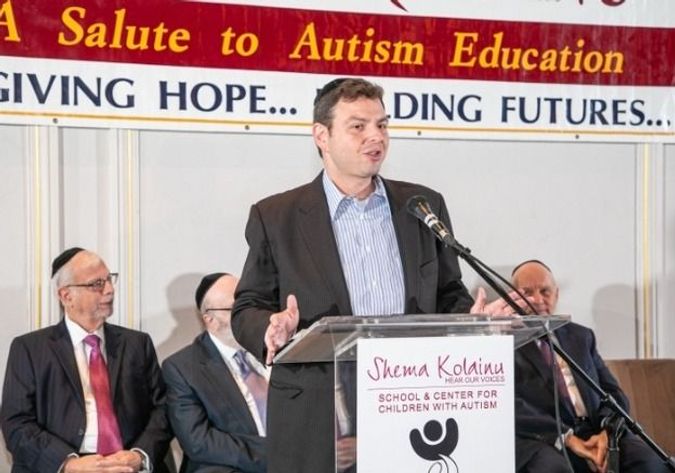 He “does the hard stuff before breakfast, and the impossible by lunch,” Jarrod Bernstein, first deputy commissioner of community affairs under Bloomberg, said of Kreizman, who he also praised as dedicated and loyal.

After leaving City Hall, Kreizman, who is Orthodox, joined Capalino+Company, a government relations firm, serving most recently as its executive vice president.

Greenspun, who was Kreizman’s boss when he first joined the agency as a Brooklyn director of outreach, called him a “a five-tool player,” using baseball scouting terms. “Not only does he know city government inside and out, he has a warm personality and an innate ability to connect with people on a meaningful level.”

Shapiro, 47, born and raised in Queens, is a Yeshiva University graduate and currently resides in the Upper West Side. He is Orthodox — the son of Rabbi Mordekai Shapiro, head of Kay Kosher supervision in Kew Gardens, and a grandson of Rabbi Solomon Shapiro. 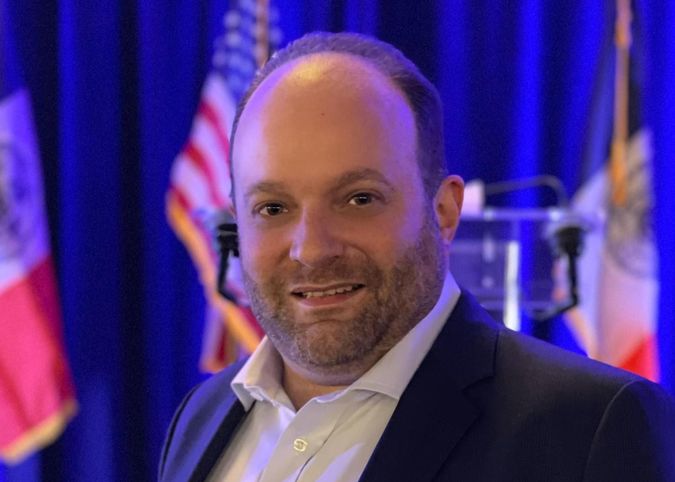 Menashe Shapiro, a campaign consultant, at the Eric Adams victory party on June 23, 2021. Image by Courtesy

Shapiro specializes in research and media relations. He is the founder of Shapiro Consulting Group and previously worked for Tusk Strategies, a New York-based consulting firm. Shapiro headed the research arm of several political campaigns in the last two decades, including Andrew Cuomo’s first bid for governor in 2002, Michael Bloomberg’s 2009 reelection campaign and his failed 2020 presidential campaign. In the 2021 New York mayoral primary, Shapiro was hired as a strategic communications consultant for the Adams campaign and also assisted in Jewish outreach.

Stu Loeser, a New York campaign consultant who was a Bloomberg spokesperson, said he first became familiar with Shapiro’s work when they worked on opposite sides in the 2002 Democratic primary for New York governor. Loeser, who was research director for Carl McCall — the Democratic nominee after Cuomo withdrew from the race — said Shapiro is a loyal professional who focuses on the facts but also knows how to shield a candidate from scrutiny. “That’s an important skill one needs in City Hall,” Loeser said.

Benny Polatseck, a digital media producer in the Adams campaign, described Shapiro as “universally respected and liked” and one who has “gained the trust of Jewish communities around New York” during the campaign.

Shapiro will report to Frank Carone, the chief of staff, who was a fixer and attorney for the Brooklyn Democratic Party and maintains close relationships with leaders of the Orthodox community.

Shapiro, the deputy chief of staff, said he found Adam’s rise “nothing short of miraculous” and that the mayor’s intention (and now his motto) to “get stuff done” made him want to join the team.

Shapiro, who was a key advisor on the campaign, said the new administration is a reflection of the diverse coalition that Adams put together during the primary and will be undergirded by an open door policy for New Yorkers of all backgrounds. The positive reaction to his appointment, as an Orthodox Jew, received on social media is evidence, he continued, that “this is an administration where everybody in the city feels that they are represented.”

He said that being a senior aide to a mayor whose work hours are from 7 a.m. to late into the night is actually a “natural fit” for him as an observant Jew. “As a Jewish person, you are trained from early on in life to get up early to pray and sometimes the nights go on very long,” he said. 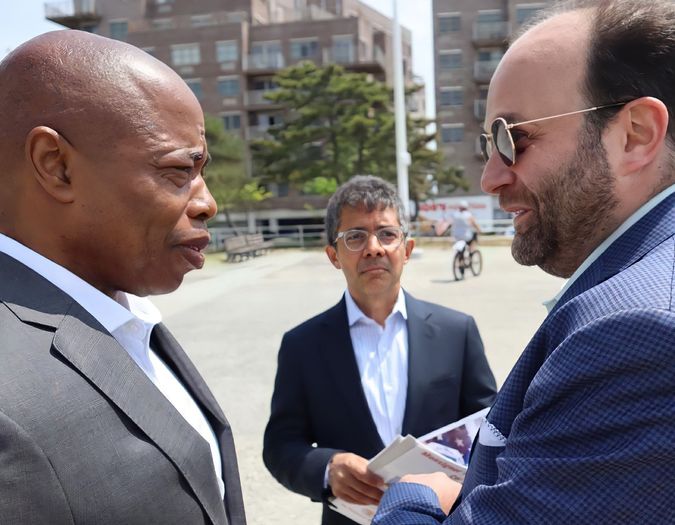 hapiro with Mayor Eric Adams during the campaign Image by Courtesy

Shapiro joked that while his boss is not a bagel guy and is promoting – thanks to his own battles with diabetes – a plant-based diet, there’s a “strong possibility” that he himself will not be convinced to give up his signature breakfast: a plain bagel with schmear of cream cheese. “I have a long way to go before I can match the food discipline of the mayor.”

On his first official day at the job, Shapiro said he requested that like Adams, he wants his first two paychecks in crypto.

Shapiro, who was on the committee of appointments during the transition, said that City Hall is focused on rebuilding the community affairs unit, headed by the new commissioner Fred Kreizman, also an Orthodox Jew, by putting together a team that will represent all faith and ethnic communities. Additionally, Adams will try to sell his agenda to New Yorkers who rely on community and other niche media for their news. The new office of community and ethnic media is headed by José Bayona, a former deputy press secretary for de Blasio and a campaign spokesperson who handled ethnic media outreach.