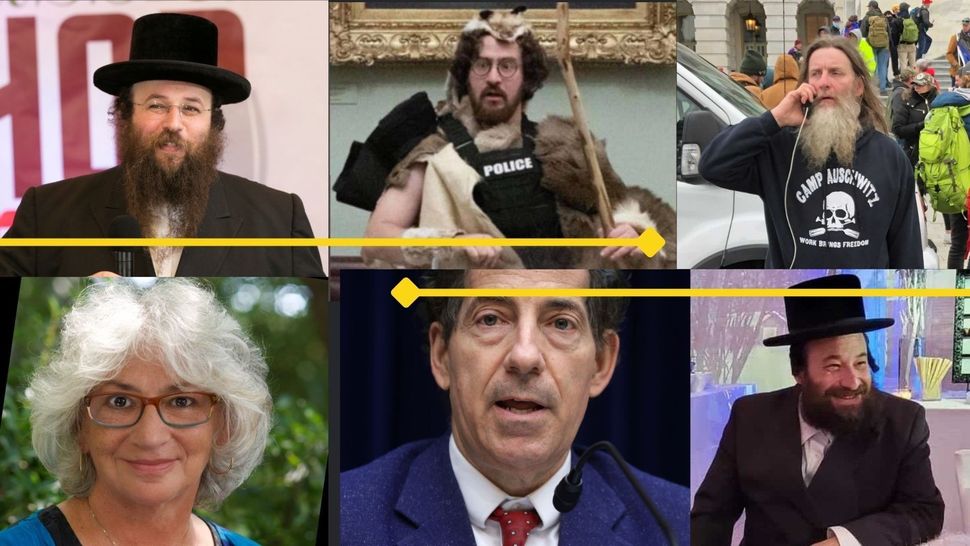 In the hours leading up to the storming of the U.S. Capitol one year ago today, antisemitic rhetoric swirled through the crowds that had gathered in D.C. in an attempt to overturn the 2020 presidential election.

“We are standing up to the evil globalists such as George Soros,” a former Breitbart News reporter told a group gathered the night before the riot. And just hours before the Capitol was breached, Rep. Mary Miller, an Illinois Republican, praised Nazi leader Adolf Hitler.

The antisemitic vitriol on the internet prior to the attack on the Capitol was more intense and abundant, infecting the online communities that spread conspiracy theories about President Donald Trump winning the 2020 election – a lie that came to be shared by more than three-quarters of Republican voters.

The most prominent of those conspiracies was QAnon, a sprawling series of beliefs that included accusations that celebrities and Democratic politicians were running a satanic pedophile ring. It helped propel many of those implicated in the attack to Washington on Jan. 6. To many Jews, its falsehoods seemed eerily familiar.

“QAnon is, to a great extent, repackaged blood libel,” David Walsh, a researcher at the University of Virginia, said in an interview at the time. Most Jewish Americans, in a September poll, said that white supremacists, Trump and conservative media bear considerable blame for the insurrection.

Few Jews have been identified among the hundreds who mobbed the Capitol, although some Jewish Trump supporters were elsewhere in D.C. that weekend. They included Heshy Tischler, an Orthodox radio host and far right provocateur who cheered on a fellow protestor carrying a shofar during one of the outdoor rallies on Jan. 6.

The violence at the Capitol that day was not focused on Jews.

Still, the events of Jan. 6 were laced with Jewish connections. One year later, here is the Forward’s look at some of the better and lesser-known figures with Jewish ties to that day – from the man who wore the “Camp Auschwitz” sweatshirt to a woman who lives in the shadow of the Capitol to a member of Congress still battling threats to free elections.

The congressman in mourning 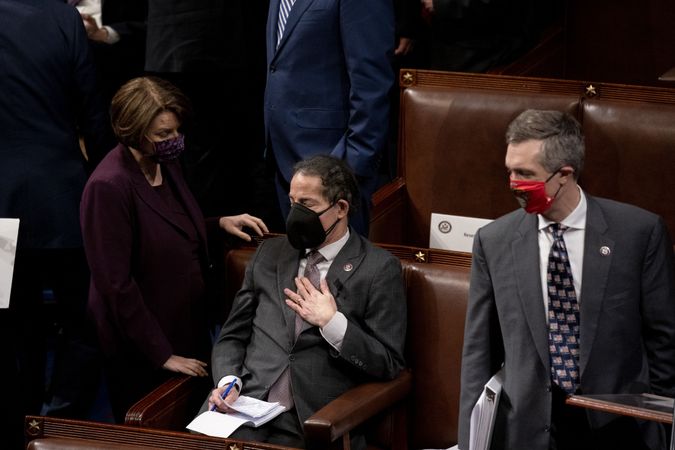 Representative Jamie Raskin is comforted by Senator Amy Klobuchar, a Minnesota Democrat, as she leaves a joint session of Congress to count the Electoral College votes of the 2020 presidential election in the House Chamber in Washington, D.C., U.S., on Wednesday, Jan. 6, 2021. Photo by Getty Images

On Jan. 6, the day after his son’s funeral, and only a week after his death by suicide, Rep. Jamie Raskin was in the Capitol, helping to certify the election; his daughter and son-in-law had come along to watch. And then the building was attacked, the family forced to hide separately, and Raskin afraid he might lose yet another child in the span of a week.

Yet the Maryland Democrat said he found strength in that trauma, and went on to lead the impeachment effort against then-President Trump, accusing him of inciting the attack.

Though he knew the role might bring death threats and violence, Raskin forged ahead; “I personally felt no fear, because the very worst thing that ever could have happened to me had already happened to me,” he told NPR. A former professor of constitutional law, Raskin’s robust defense of democracy, though doomed, was moving to many. He also spoke personally, recounting his promise to his daughter that the Capitol would be safe the next time she visited, and her response, devastating to him, that she never wanted to return.

In the year since the multiple tragedies, Raskin has written a searing memoir, “Unthinkable,” about the insurrection and his son’s death, which he said is the main driver of his public service. Raskin now sits on the House select committee investigating the Jan. 6 attack, and is also working to reform the Electoral College.

“If a person can grow through unthinkable trauma and loss,” Raskin wrote in his new book, “perhaps a nation may, too.”

A neighbor to the chaos

Laurie Solnik lives 12 blocks from the Capitol and spent Jan. 6 watching the events unfold on her television with her family. “We all agreed we were just going to hunker down,” Solnik recalled. But her mind went to dark places. She said the fencing, police barricades and National Guard troops that followed the violence triggered thoughts of her parent’s experience during the Holocaust, when both survived Nazi concentration camps.

I’m getting over it.”

“I knew in my head this was different: nobody is trying to kill me,” Solnik said. “But it felt the same – as if a roundup was coming.” 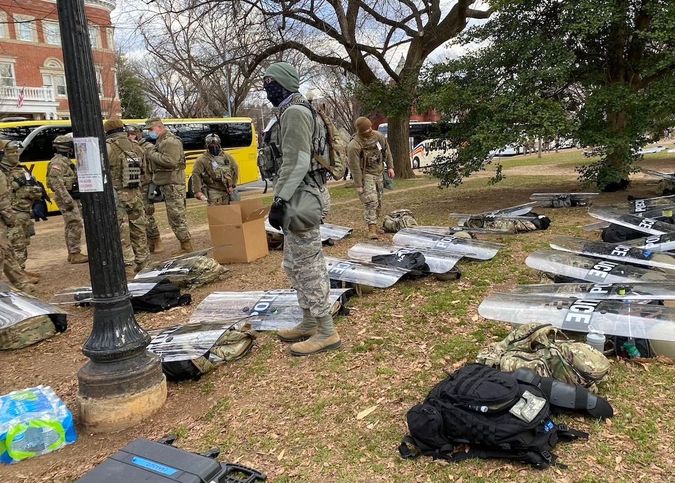 National Guard members assemble in a park across the street from Laurie Solnik’s home in the Capitol Hill neighborhood of Washington, D.C., following the Jan. 6, 2021 attack on the U.S. Capitol. Photo by Steve Kolb

Solnik, 68, is active in Hill Havurah, which is the closest synagogue to the Capitol – it meets less than two blocks away. Solnik said that after seeing protesters attack Black churches in D.C. during the previous year, she worried that her own Jewish community could be a target in the future. A year later, with her Capitol Hill neighborhood returned more or less to normal – no more imposing fencing or soldiers in camouflage milling about – Solnik said she is more relaxed.

“I guess I’m getting over it,” she said. 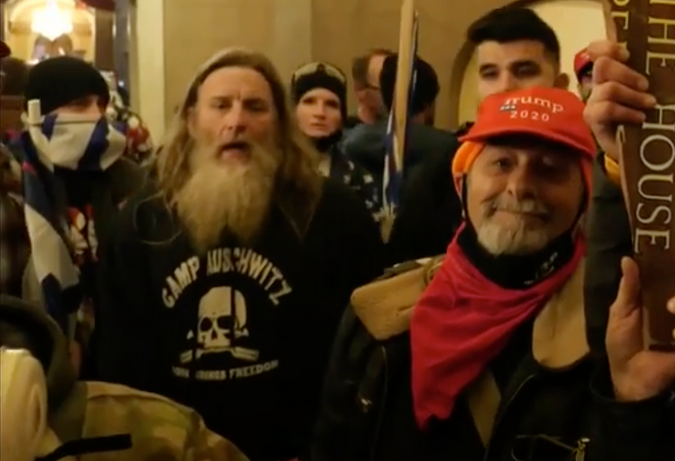 Among the hundreds of protesters arrested for their role in storming the Capitol, Robert Keith Packer may be the best known to Jewish audiences.

Packer, with long hair and a raggedy beard, wore a “Camp Auschwitz” sweatshirt as he broke into the Capitol on Jan. 6, becoming the posterboy for antisemitic undercurrents running through the crowd. He was arrested several days later after a convenience store clerk near Newport News, Virginia., where Packer lives, told law enforcement that he was a regular customer.

Police found a trove of Nazi paraphernalia at Packer’s home, and charged him with illegally entering the Capitol and disorderly conduct. Packer pleaded not guilty in February but his trial has been repeatedly delayed and his next court hearing – scheduled for Jan. 26 – is expected to involve a plea agreement. An attorney for Packer did not respond to a request for comment. He remains free on bail.

Aaron Mostofsky’s participation in the Capitol insurrection stunned many. The Orthodox Jew, son of Brooklyn Supreme Court Justice Steven Mostofsky, traveled from New York City and was photographed inside the Capitol wearing animal furs, a bulletproof vest and a riot shield emblazoned with the U.S. Capitol Police logo. A bewildered-looking Mostofsky was interviewed on video by the New York Post, telling the reporter that “we were cheated” and that 10 million more people voted for Trump than tallies showed. 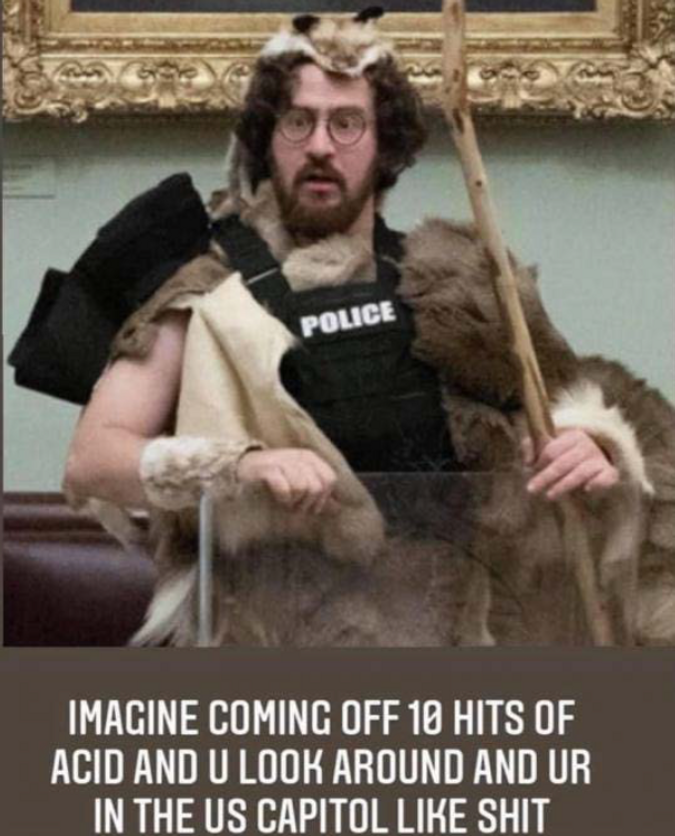 This meme of Aaron Mostofsky was included in the criminal case brought against him by the Department of Justice for entering the U.S. Capitol on Jan. 6, 2021.

In a private Instagram conversation revealed by prosecutors, Mostofsky wrote to an acquaintance of his time in the Capitol: “It was like I’m here now how did I get there.”

Mostofsky was charged with four crimes, including theft of government property and disrupting government business. He has pleaded not guilty and his trial is scheduled for March. He remains free on bail, though he is required to notify the court if he leaves New York City. 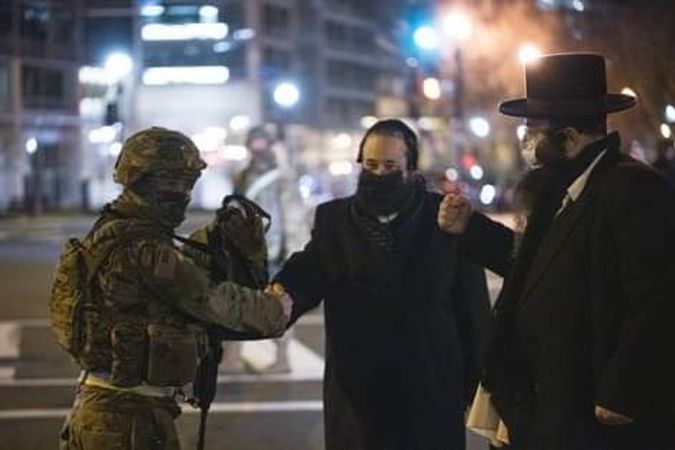 Disgusted and saddened by the Jan. 6 assault on the Capitol, Aron Weider and Alexander Rapaport – two Hasidic friends from New York – felt helpless from 200 miles away. But the bravery of the Capitol Police and the National Guard that day inspired them to make the trip to D.C. two weeks later – for the inauguration of President Biden.

Few tourists or well-wishers were allowed inside a vast security zone surrounding the Capitol for the inauguration, but that wasn’t where Weider, the founder of a Borough Park soup kitchen, and Rapaport, a Rockland County legislator, were headed. With a van packed with $10,000 worth of toiletries, energy drinks, energy bars and chocolates – paid for by a D.C. security firm – the two drove around the perimeter of the secured area, handing out goodies to members of the National Guard, who were pulling 12-hour shifts in cold weather and taking their breaks in parking garages.

‘We brought you some love from Brooklyn,’” Rapaport told the troops, who often asked for selfies with these unexpected gift-bearers.

Wieder’s four grandparents were rescued by the 3rd Infantry Division of the U.S. Army during the liberation of the Dora-Mittelbau concentration camp in 1945. “I will never miss an opportunity to say thank you to you guys and what you are standing for,” he said. Rapaport said that as shaken as he was on Jan. 6, he felt more hopeful with the transition of power on Inauguration Day. He returned to D.C. days later after restocking the van in New York.

Both he and Wieder said that they hoped that their obviously Jewish appearance sent a message to all who saw them in Washington, that “the Jewish people support our servicemen and women and value the stability of our nation.”