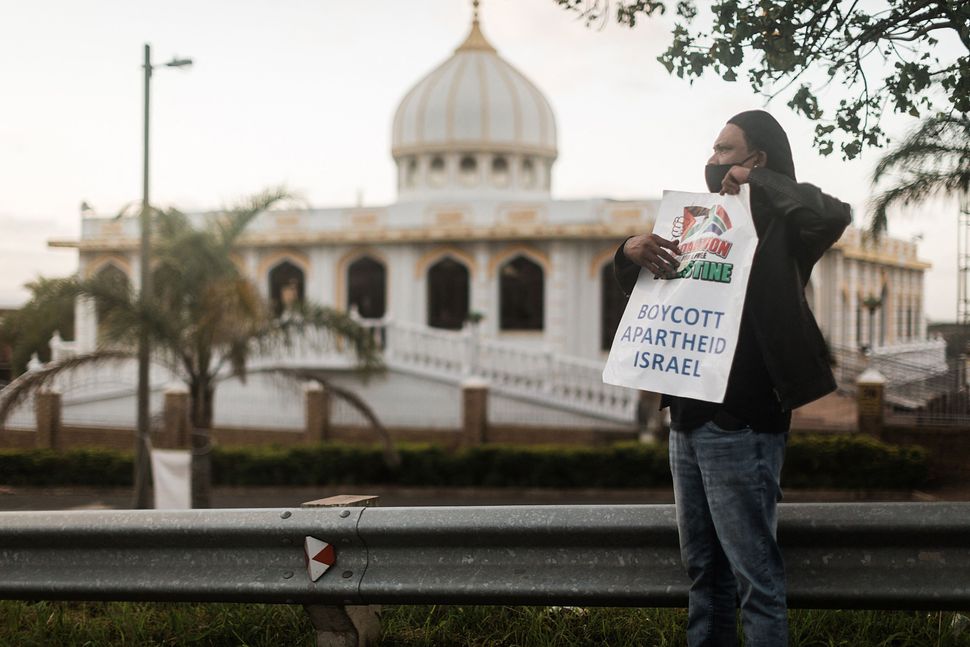 A lengthy report by Amnesty International Tuesday accusing Israel of apartheid may complete the term’s transition into the mainstream discourse around the Jewish state. Once made only by the most strident activists, the claim that Israel is ruling over Palestinians in a manner similar to how white South Africans dominated that country’s Black majority has now gained the imprimatur of major human rights groups inside and outside Israel.

“There’s been an incredible shift in the conversation,” said Omar Shakir, the Israel and Palestine director at New York-based Human Rights Watch who authored its April report. “There is certainly a consensus in the international human rights movement that Israel is committing apartheid.”

The growing adoption of the term may help fuel the Boycott, Divestment and Sanctions movement aimed at Israel and modeled after the campaign that helped force apartheid South Africa to eventually accept majority rule. It also challenges the framework that liberal American Jewish institutions and many human rights groups have long used to describe Israel’s occupation of the West Bank and Gaza: as a stain on an otherwise liberal democracy.

The charge of apartheid goes to the heart of Israel’s character. For many of the country’s supporters, it’s an attack that attempts to undermine Israel’s right to exist as a Jewish state – albeit one that comes from a sector that has long clashed with Israel without achieving policy changes. “It’s basically an attempt to tarnish Israel’s brand,” said Eugene Kontorovich, a professor at George Mason University who regularly defends Israel against accusations it has violated international law.

The response from Israel and mainstream American Jewish organizations to Amnesty’s report was swift. The Israeli foreign ministry decried the Amnesty International report as “antisemitism.” And other defenders of the nation pointed to the surge in apartheid claims as further evidence of bias against Israel. “It will only serve, like previous similar prejudiced reports, to fuel the fires of antisemitism under the guise of political correctness,” Ronald Lauder, president of the World Jewish Congress, said in a statement.

Amnesty’s claim that Israel is guilty of apartheid against Palestinians living in both Israel, the occupied West Bank, Gaza and even abroad, was more sweeping than the accusations leveled by Human Rights Watch and came following a year when activism aimed at Israel reached new heights. The country faced one of its first major boycotts by a popular consumer brand – Ben & Jerry’s ice cream – and a Jewish Electorate Institute (JEI) poll revealed that nearly half of American Jews believed Israel was committing apartheid or might be doing so.

Kenneth Bob, president of the liberal Zionist group Ameinu, said he was alarmed that the Israeli government did not appear primed to change its treatment of the Palestinians in response to mounting international outcry.

“I can go through and dissect the words,” said Bob, who said he rejected the claim that Israel was guilty of apartheid within its 1967 borders. “On the other hand, I think what American Jews should do is point out to Israel that the problem is the policy and not the words.”

Bob said that in coming years younger American Jews, who hold overwhelmingly more critical views toward Israel than their parents and grandparents, will take leadership positions at synagogues, Jewish day schools and other institutions and shape perceptions of Israel based on what they see taking place on the ground.

In a July poll by JEI, 38% of American Jewish voters under 40-years-old said that Israel was guilty of apartheid and an additional 15% were unsure, compared with just 13% of those over 64 who said the same.

A term hard to ignore

A host of Israeli NGOs led by B’Tselem, Yesh Din and Adalah have accused the government of apartheid over the last two years, largely citing the longevity of Israeli rule in the West Bank and its varying degrees of control over Gaza, which these groups claim requires Israel to extend greater rights to Palestinians who have lived under Israeli rule since 1967.

Those who apply the term “apartheid” to Israel argue that it brings moral clarity to what has long been seen as a complex and intractable conflict between Israelis and Palestinians.

“Calling out in the way that Amnesty International and Human Rights Watch and many other respected institutions are doing is helping to build that chorus – and build that demand for accountability – to a point where the Israeli decision makers can no longer ignore it,” said Yousef Munayyer, a fellow at the Arab Center Washington DC.

Critics in turn argue that the application of “apartheid” to Israel is part of a pressure campaign that is divorced from the reality of Israel’s occupation of the West Bank or discrimination against Israel’s Arab citizens. They point to language in the Amnesty report that traces the alleged roots of Israeli apartheid to the establishment of the state in 1948, which occurred under the auspices of the United Nations.

“This system of apartheid originated with the creation of Israel in May 1948 and has been built and maintained over decades by successive Israeli governments across all territories they have controlled, regardless of the political party in power at the time,” the Amnesty report stated, detailing forced expulsions, property seizures and other abuses against Arabs who were living in the region during the war that led to Israel’s creation.

London-based Amnesty International did not respond to repeated requests for comment on the report.

Israel’s apartheid over Palestinians is a crime against humanity. There is no place for it in a world that upholds equality and the right to live with dignity. To uphold human rights everywhere, we must end apartheid rule over millions of Palestinians.#EndIsraeliApartheid ✊ pic.twitter.com/686eFMYuLb

Kontorovich said the focus on Israel’s origin suggested the apartheid claims were simply the latest iteration of longstanding attempts to undermine the premise of a Jewish state, which he dated back to the 1975 United Nations vote declaring that Zionism was equivalent to racism.

“When you have an ‘apartheid state,’ you don’t just reform certain policies,” said Kontorovich, “‘apartheid’ is saying that it’s fundamentally wrong – the very creation of Israel, its very identity as a Jewish state – which means you need to end this notion of a Jewish state.”

The American Jewish establishment was nearly universal in its condemnation of Amnesty’s report. The Reform movement, the largest and most liberal major denomination in the United States, blasted the document as “replete with discredited and inaccurate allegations,” even as it acknowledged “the occupation as a moral travesty.” David Harris, head of the American Jewish Committee, called it “nothing short of a canard, a libel.”

The various organizations that have accused Israel of apartheid have couched their claims differently. Yesh Din, for example, found that “the crime against humanity of apartheid is being committed in the West Bank,” while it did not address the treatment of Palestinians in Israel. B’Tselem examined Israel’s treatment of Palestinians across the entire territory it controlled and found: “This is apartheid.” Human Rights Watch likewise found discrimination against Palestinians across the territory Israel controls, but based its finding that Israel was guilty of apartheid primarily on human rights violations that occurred in the West Bank, East Jerusalem and Gaza, while Amnesty applied the term to Israel more broadly and said it was even being perpetrated against Palestinians living abroad who were barred from returning to their former homes in Israel.

Most groups have stated that they are not drawing a direct comparison with South Africa, but rather referring to apartheid as it is described in international law. Amnesty has also accused Myanmar of apartheid for abuses committed against its Rohiynga minority.

Apartheid analogy has ‘broken through’

The question of whether Israel can free itself of apartheid accusations by ending its occupation of the West Bank go to the heart of Kontorovich’s contention that the pressure from human rights groups is not intended to change any specific policies but rather to condemn the Jewish state to permanent opprobrium.

Shakir, with Human Rights Watch, said it was impossible to determine whether Israel would still be guilty of apartheid if, for example, it reached a peace settlement that created a soverign Palestinian state in the West Bank and Gaza.

“It’s difficult to answer a question about the hypotheticals because you would have to look at the totality of circumstances,” Shakir said. “We don’t think through the policy lens.”

American Jews have a fraught history with the apartheid, dating back to its origins in South Africa. While Jews were overwhelmingly opposed to South African apartheid – in which roughly 5 million whites used a legal regime to dominate nearly 30 million Blacks and other racial groups – some shied away from the anti-apartheid movement in the late 1970s and early 1980s over concerns related to Israel.

Many activists leading the movement were upset that Israel had forged a close relationship with South Africa’s white government, including offering to sell it nuclear weapons, and even at the time some compared Israel’s rule over the Palestinians to apartheid, according to Marjorie Feld, author of “Nations Divided: American Jews and the Struggle Over Apartheid.”

Feld said that while the analogy between Israel and apartheid South Africa has been made for decades, it is only in recent years that the claim seems to be penetrating within the Jewish community.

“I don’t think it’s a question anymore if people are going to start using the analogy more often,” said Feld, who is on the advisory council of Jewish Voice for Peace. “It’s broken through and it’s here.”