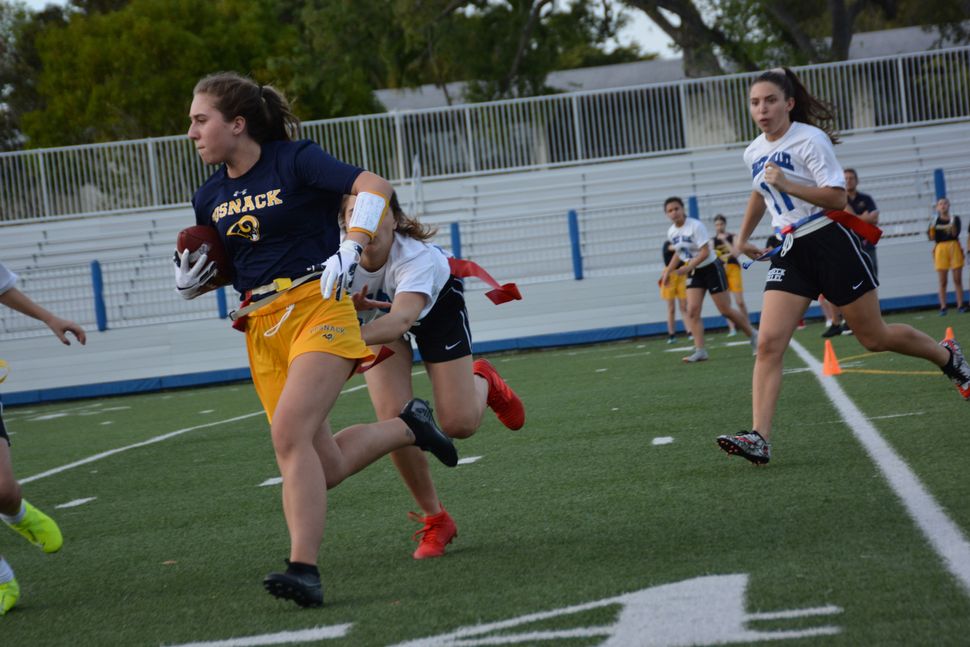 Because many schools schedule their flag football games on Friday night and Saturday, Jewish teams’ most frequent opponents are each other. Here, a student from Scheck Hillel Community School in Miami, Fl., pursues a ball carrier from David Posnack Jewish Day School, of nearby Davie. Courtesy of Cindy Lyon

Every Super Bowl game starts the same way: a coin toss determines who receives the ball first. With millions of people watching this moment — millions of dollars are wagered on it — the National Football League uses the occasion to highlight worthy causes and people. Last year, a healthcare worker flipped the coin. The year prior, Rev. Martin Luther King Jr.’s daughter did the honors.

For Sunday’s big game, the NFL selected a small cohort of young athletes to participate — among them the captain of a Jewish high school’s flag football team.

This year, Yeshiva University High School of Los Angeles (usually referred to as YULA) joined a new girls’ flag football league co-sponsored by the Rams and Chargers, L.A.’s NFL teams, and at the end of the season, each team was invited to send one player to the Super Bowl. But YULA has had their flag football team since before either of those teams returned to town. It’s one of several Jewish schools across the country where the sport was an instant hit — and where girls played it before boys did.

With youth tackle football participation plummeting amid concerns of costs and safety, the NFL is counting on the continued growth of flag football to build new interest in the professional game, and its success at Jewish schools shows why. Flag football, in which tackles are recorded by pulling a flag belt off the waist of the ball carrier, has manifold appeal to young athletes: it’s mostly non-contact, and flags are the only equipment required (other than the ball). Its greatest asset, though, may be its accessibility to girls who otherwise wouldn’t play any sport at all.

Before Ariella Hirschhorn went out for flag, she said, “I only knew my dad liked the Giants. That was the extent I knew about football.” Her friend, also new to the sport, dragged her along to tryouts last September.

“When you’re younger, and you play sports at recess, or you’re put on teams for soccer and basketball, it’s like, I know what type of person is good at those. So you’re like, ‘Well, why would I try out?’” Hirschhorn said. “But football’s a new thing. So you know every year there’s gonna be people who don’t know how to play. So you’re not going into this fresh, like, alone.” 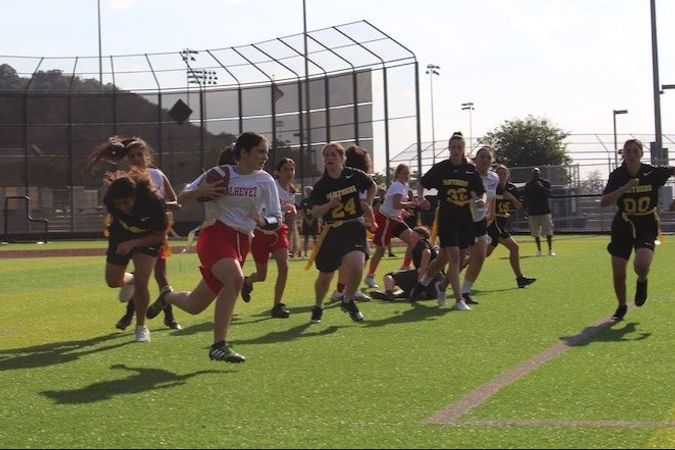 Shalhevet High School started its team because YULA, its L.A. athletic rival, needed more opponents. Above, the two teams face off in a 2019 game. By Layla Dauer/Shalhevet Boiling Point

Long a staple of phys-ed classes and intramural leagues, the rules of flag football differ from tackle football in a few major ways. Five to eight players line up per side (as opposed to 11 in tackle). There is no kicking game — touchdowns are followed by attempts for short-yardage conversions. First downs are not earned with 10 yards, but by advancing to line-markers on the field. And no contact is allowed, including blocking at the line of scrimmage. Other rules, such as whether the quarterback may run the ball, vary by league.

In addition to Shalhevet and YULA are girls’ flag teams at several Jewish high schools in Florida, a co-ed team at Atlanta Jewish Academy, and middle school girls’ teams at Jewish schools in Arizona, California, and New York. Limiting the growth of the sport is that it is not sanctioned by city or state amateur athletic organizations, meaning there is not an infrastructure in place to support it with official referees, divisions and rules.

“Football’s a new thing. So you know every year there’s gonna be people who don’t know how to play. So you’re not going into this fresh, like, alone.”

Left to their own scheduling devices, non-Jewish schools often schedule their flag football games on Shabbat, making it difficult for Jewish flag teams to find opponents. Shalhevet has found a willing foe in Seventh-Day Adventist schools, which also observe Saturday as a day of rest. But Jewish schools’ most frequent — and most evenly matched — opponents are each other.

Shalhevet formed its team in 2012 partly because YULA, which already had one, challenged the school to a head-to-head. Christopher Buckley, then a math teacher at Shalhevet, volunteered to coach, and with the NFL providing equipment like flags and footballs, he announced an after-school tryout at a school assembly.

The turnout was roughly half of the girls’ student population. One girl showed up in ballet slippers — a testament, Buckley said, to the broad interest in the sport.

“This was supposed to be just a one-off, and all these people wanted in,” said Buckley. He coached the team for two more years. 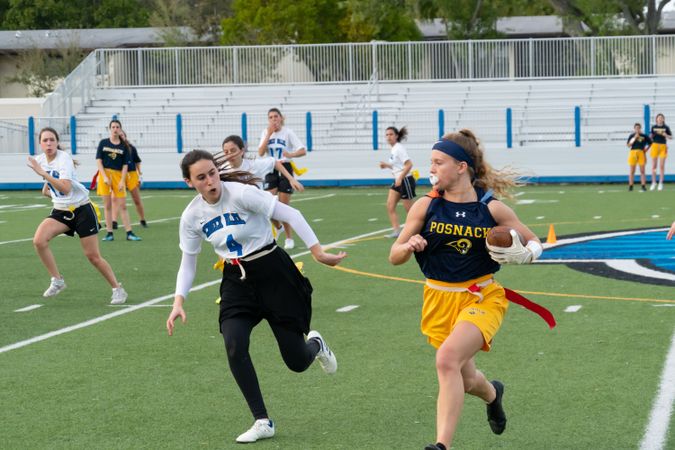 Flag football is non-contact, with “tackles” recorded by pulling a flag belt off the waist of the ball carrier. Courtesy of Cindy Lyon

In addition to the sport’s relative novelty, flag football draws a range of participants through its roster structure. Positions in a football lineup are highly specialized and suit a variety of athletic skill sets — and the majority don’t involve handling the football. That means girls who haven’t been kicking a ball, swinging a bat or shooting jump shots their whole lives can still be effective on the field.

Buckley said a fast runner he was hoping would be a wide receiver ultimately couldn’t catch, and made a great pass-rusher instead. A freshman who hadn’t gone to tryouts but was convinced by her friends to join later on became the team’s star receiver. The quarterback was easy to spot — she could throw a tight spiral and hit the girls in stride.

Nearly a decade later, Hirschhorn tried her hand at receiver, cornerback and the offensive line before settling into her role as the right defensive end.

“When you found what you were good at,” Hirschhorn said, “you really tried to get as good as you can at that position.”

In Florida, which has a strong youth football culture, more girls come in with experience playing the sport. Stephanie Wolak, a senior at Scheck Hillel Community School in Miami — one of at least four Jewish high schools in the area with girls’ teams — said she has been a quarterback for as long as she can remember. She joined the Scheck Hillel flag team in eighth grade and is now its captain.

Still, she said, about half of the players on the team now had never played before this year. A number of seniors joined on a lark, a way to enjoy their final semester; a few caught the bug.

“They never knew what they were missing out on,” Wolak said. 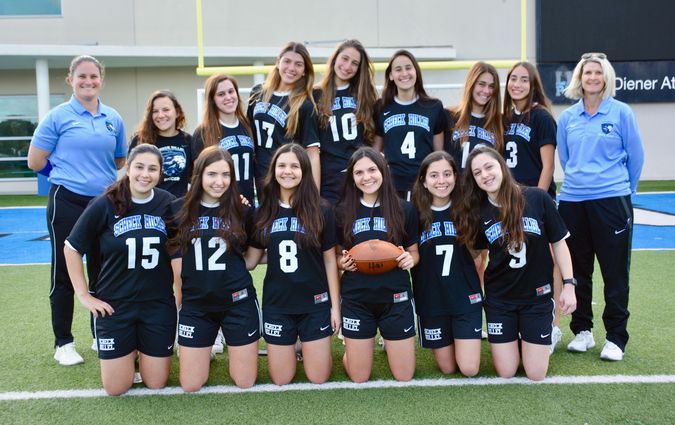 Though more girls play youth football in Florida, Scheck Hillel’s flag football team still features some girls who had never played. “They never knew what they were missing out on,” said team captain Stephanie Wolak. Courtesy of Cindy Lyon

Along with the inherent health benefits and just plain fun of flag football is the sense of pride players describe feeling having conquered a domain usually reserved for men. Unlike some of the more established girls’ high school sports, there is no women’s pro football league, reinforcing the hyper-masculine reputation that descends from the physicality of the game itself, and cultural biases that have prevented girls and women from playing it.

Scheck Hillel fielded a boys’ tackle football team for many years. But this fall, it couldn’t attract enough players, and an attempt to start a boys’ flag team foundered. So the only football players at the school are girls, and it’s the boys who come to cheer them on.

Wolak relished the transformation so much she wrote about it in her college admissions essay.

“It’s different playing sports as a girl, because guys get all the attention and it’s crazy,” she said. “In eighth grade, we didn’t really get that much recognition. Leaving as seniors now, it’s a completely different sport. Now we get more like people watching. So it feels like we’re actually playing.”