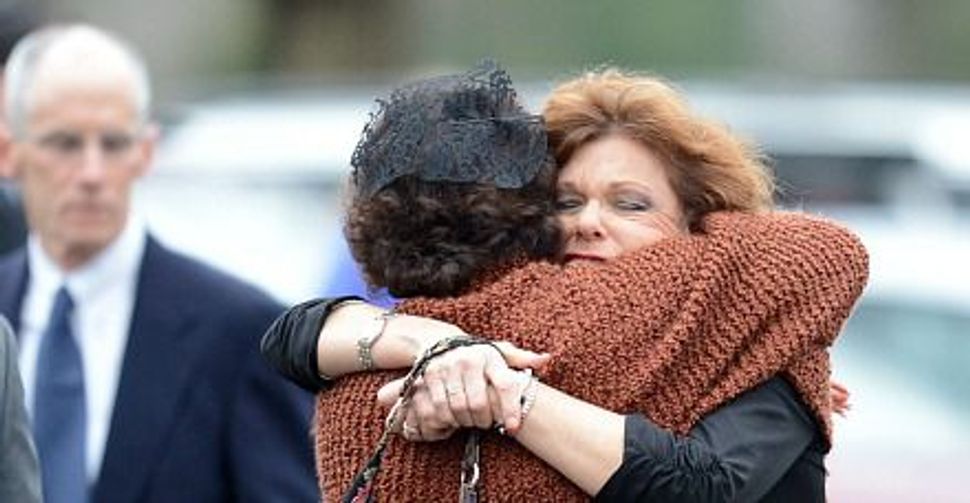 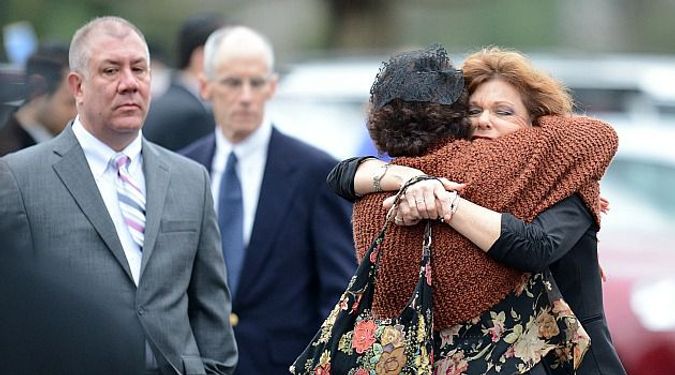 It was a eulogy for a life that had only just begun.

Veronique Pozner remembered her son Noah as a rambunctious, video-game loving “little man,” a boy with a perpetual smile and twinkly blue eyes who dreamed of becoming a doctor, a soldier and manager of a factory that makes tacos – his favorite food.

Noah Samuel Pozner, age 6, was the youngest victim of the massacre last week at the Sandy Hook Elementary School in Newtown, Conn. He was laid to rest Monday, his miniature wooden casket set beneath the podium where his mother stood.

“The sky is crying,” Veronique said.

So were hundreds more, mourners who lined the walls of a small Jewish chapel in this coastal Connecticut city for one of two funerals held Monday – the first of 26 that will be carried out over the coming days. Among them were Sen. Richard Blumenthal (D-Conn.), Sen.-elect Chris Murphy, and the state governor, Dannel Malloy, who personally had delivered the awful news to parents last week after the shooting. Malloy spent much of the service with his eyes cast down and hands clenched under his chin.

With abundant tears and a gathering resolve, the eulogizers offered tributes to a loving boy whose death, they said, should inspire the living to acts of love and compassion.

“Noah, you will not pass through this way again,” Veronique said. “I can only believe that you were planted on earth to bloom in heaven. Take flight, my boy. Soar. You now have the wings you always wanted. Go to that peaceful valley that we will all one day come to know.”

Days after one of the deadliest mass killings in American history, one that claimed the lives of 20 children and six adults in a suburban school, a sense of shock is still palpable on the leafy streets of southwest Connecticut. In Newtown and surrounding communities, schools were on lockdown as children returned to class on Monday.

In nearby Ridgefield, Chana Deitsch, the local Chabad emissary, had the uncomfortable task of telling her children the news and comforting the mothers who come to her weekly Mommy and Me program on Monday.

Her husband, Rabbi Sholom Deitsch, had an even grimmer obligation. After news of the shooting broke on Friday, he hurried to the old fire station in Newtown where the families of the fallen were informed by the governor that their children were never coming home.

“It was a horrifying scene, watching how the parents were hearing what was going on,” Deitsch said.

At one point, Malloy, spotting Deitsch in the scrum, recalled that Friday was the sixth day of Chanukah. “It’s supposed to be a brighter day,” Deitsch recalled the governor saying.

On Monday, residents here and around the country were still groping for answers and pledging to do something – anything – to stem what seems like a rising tide of gun violence.

But in remembering Noah Pozner, speakers steered clear of the swirling political debate about gun control, enjoining mourners only to live better lives in memory of the fallen.

“Let us not be lost in sorrow,” said Noah’s brother, Michael. “Let us remember the beauty, laughter, smiles and happiness little Noah brought us. Let us live our lives as healthily, righteously and happily as we can. Let’s do it for our little man, who would have wanted that.”

Rabbi Shaul Praver, the leader of Congregation Adath Israel of Newtown, who has been cast into the national spotlight since the killings, presided over Noah’s funeral. On Sunday, he chanted the El Maleh Rachamin, the Jewish mourner’s prayer, at a nationally televised memorial service attended by President Obama. At the funeral, he said that the secret of Jewish survival was to meet tragedy with resolve.

“We can and we will thrive in the honor of Noah Pozner,” Praver said on Monday. “Let us all make that vow, that we will thrive. We will do something extra in our life, in this world, while we’re here, in his honor. And we can expect the light found in this tremendous sorrow can change the world.”

At the close of the funeral, Praver asked whether any teachers from Sandy Hook were present; a number of hands were raised. Six educators lost their lives in an attempt to confront the gunman and their sacrifice has been widely praised.

“There is something in Hebrew called a Kiddush Hashem, a sanctification of God’s name,” Praver told them. “And we have done that.”