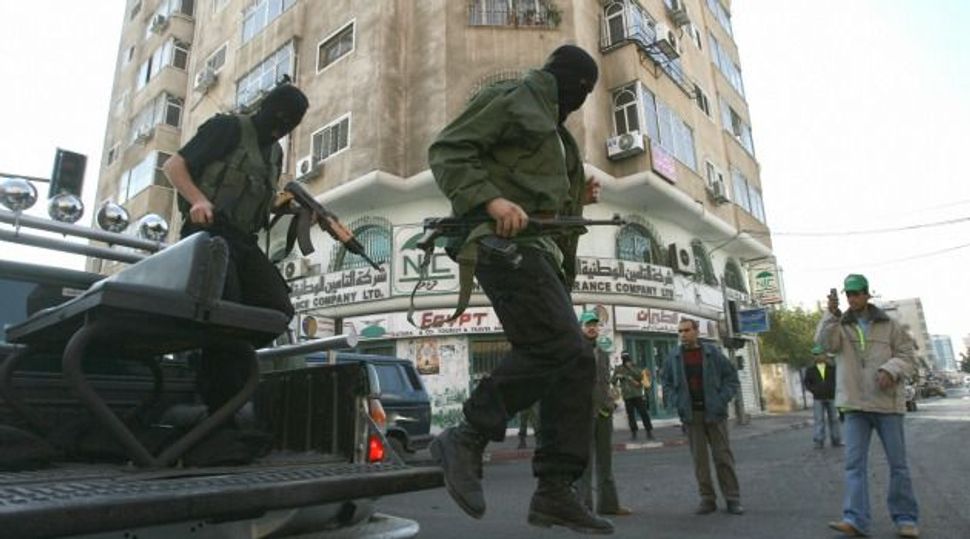 Kindler Gentler Hamas: Hamas militants seek to round up suspected Israeli informants. The Gaza rulers are vowing to take a gentler approach to spies if they confess. Image by getty images

The alleged spy buried his face in his hands inside a Gaza jail as he admitted passing intelligence to Israel during its battles with armed Palestinian groups.

“My handlers in Israel called me and told me that collaborators in Gaza don’t know one another and that each worked alone, so hide and stay as you are,” the man told visiting reporters, under the watchful eye of a plainclothed Hamas security officer.

“I should have turned myself in. This is my problem now. Maybe if I had, you wouldn’t find me here,” he said.

The Islamist Hamas government, which is pledged to Israel’s destruction by force of arms, is lauding a recent campaign to root out informants in its midst, which it hopes will deprive Israel of a subtle but effective tool.

The muscular 41-year-old, who did not give his name, missed the deadline to turn himself in and will not receive leniency when his case goes to trial, Hamas says. Fellow prisoners listened to his anguish over his unknown fate through metal windows in the concrete corridor.

The Hamas Interior Ministry says the month-long campaign which ended on April 11 was a policy shift away from harsher tactics against spies accused of passing on vital information, such as the whereabouts of arms’ depots or top militants.

These tip-offs are believed to have helped Israel plan its air strikes during the eight-day conflict with Hamas last November, when Israeli jets hit some 1,450 targets, killing more than 170 Palestinians, including many civilians.

The militant group used to broadcast chilling confessions of collaborators and put the worst offenders to death.

In scenes that shocked the world, seven suspected spies were yanked from Hamas custody in Gaza during the November conflict and shot dead in the street. One corpse was dragged by motorbike through Gaza city by pistol-waving men shouting, “God is Great.”

But in this latest campaign, publicized through billboards and mosque sermons, Hamas’s Internal Security Service (ISS) promised to treat those who surrendered of their own volition gently.

The campaign, Hamas says, was meant to bring wayward citizens back into the fold and counter through persuasion the espionage it says Israel gains through manipulation.

“We’ve made a media and educational effort to inform the Palestinian public about collaboration…the worst and most dangerous tool the occupation (Israel) uses against our people,” said Mohammed Lafi, the deputy ISS chief who led the campaign.

He declined to reveal how many Gazans had stepped forward, saying such information would benefit Israel. In all, Hamas says only “tens” of spies are languishing behind bars.

Collaboration with Israel is widely reviled by Palestinians, who see spies as traitors to their people.

“Do they feel mercy for the kids who get torn into pieces and to leaders whose bodies are burnt to death? Why should I feel mercy for him?” said Huda Adel, an office secretary, voicing sentiments shared by many Gaza residents.

Locals often refuse to marry their sons or daughters to relatives of convicted or dead collaborators.

“It’s horrifying how your life can turn into hell in a blink of an eye,” the brother of a jailed alleged spy told Reuters, taking deep drags from his cigarette.

Sitting nervously in a Gaza cafe, the man said many people shunned his brother’s family when rumours of his deeds spread.

“Will his daughter marry? Will anyone accept to marry his boy?” the brother worried.

Minister of Interior Fathy Hammad said Hamas’s new policy aimed to emphasize that spying was an individual act and offered anonymity to anyone who handed themselves in to avoid the inevitable backlash from their neighbours.

“As a community we should support the family whose household fell to the devil,” Hammad told Reuters.

Many confessed spies say they were offered coveted Israeli permits to move in and out of the crowded coastal enclave, which struggles under tight restrictions from neighbouring Israel and Egypt. Others were in Israeli custody and agreed to become spies in exchange for commuted sentences.

A senior Israeli official told Reuters the informants were necessary because “Israel faces a very real threat from Gaza, as Hamas regards every Israeli civilian as a legitimate target”.

Israel pulled its troops and settlers from the territory in 2005 but has come under regular rocket attack since then. In response, it imposed a stringent blockade on Gaza and has waged two short wars in a stated effort to stop the missiles.

The official called the Hamas government a “Stalinist authoritarian regime” whose measures against suspected spies amounts to “brutal and arbitrary violence against the people of Gaza, using collaboration charges as an excuse”.

Since taking power in 2007, Hamas authorities have executed 14 people, including six convicted spies. Hammad said his ministry reserved the right to execute more spies in future.

Hamas’s political rival, the Palestinian Authority which has partial control over the nearby, occupied West Bank, also comes down heavily on alleged spies. Last week, a member of the Palestinian security forces was condemned to death for being a collaborator, although his sentence will almost certainly be commuted to life in jail.

“Steps by Hamas to provide an alternative to the detention and trial of alleged collaborators should be encouraged given the severe problems with its justice system,” senior HRW researcher Bill Van Esveld told Reuters.

ISS deputy head Lafi, for the first time disclosing details on its jailing policy on convicted spies, said most of those already in jail whose crimes were not serious would be freed after serving two-thirds of their sentences.

The offer will not spare veteran spies, and those whose work led to the killings in Israeli bombing raids or assassinations of militant leaders, Hamas said.

But with almost one third of Gazans unemployed and 80 percent of households living below the poverty line, local NGOs believe some young Gazans will continue to be drawn to espionage in return for Israeli cash, regardless of Hamas crackdowns.

“The Gaza government should treat some of the reasons why Israel’s security forces manage to get through to victims, such as poverty,” said Samir Zaqout of the al-Mezan Center for Human Rights, which is based in Gaza’s Jabalia refugee camp.