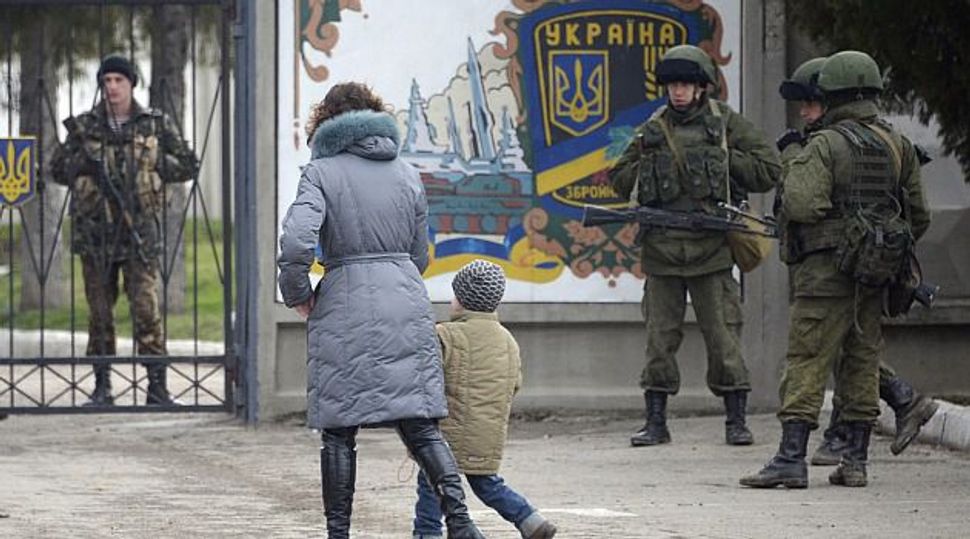 (JTA) — Shortly after Russian soldiers occupied the Crimean city of Sevastopol last week, Leah Cyrlikova took her two children out for an afternoon stroll in a city park.

When they passed a group of soldiers, they stopped to have a friendly chat and pose with them for photos.

While many Ukrainian Jews have strongly condemned the Russian military incursion into Crimea, others see the intervention as restoring order in the wake of a violent revolution that overthrew the pro-Russian government of President Viktor Yanukovych.

“I feel safer with them around,” said Cyrlikova, a Jewish Ukrainian who has lived in Sevastopol for five years. “These are crazy times, and now I know that if something bad happens, they will stop it.”

Divisions within the Ukrainian Jewish community have deepened in the wake of the Russian movement last week into the Crimean Peninsula, where approximately 10,000 Jews live amid an ethnic Russian majority.

Many Ukrainian Jews took part in the opposition movement centered in Kiev’s Maidan, or Independence Square. Jews participated despite the fact that the protests included far-right activists and some political figures who have been known to espouse anti-Semitic views. But support for the revolution is hardly unanimous among the country’s Jews.

Rabbi Misha Kapustin, whose Reform synagogue in the Crimean capital of Simferopol was recently vandalized with swastikas, acknowledged that some Jews support Russian involvement in the crisis.

“In this area there is considerable support for the Russian invasion, and the local [Crimean Jewish] community is very assimilated here,” Kapustin told JTA. “You should take into account the effect of Russian propaganda: the television they watch, what papers they read.”

But he stressed that he felt his country was being invaded by foreigners.

“How would a Brit feel if another nation invaded London? That’s how I feel as a citizen of Ukraine,” Kapustin said. “The city is occupied by Russians, who seem to have decided to take over the Crimea. If this were the case, I would leave the country because I want to live in democratic Ukraine.”

Residents of Crimea are at present able to move around freely at all hours, Kapustin said. They are also free to leave the peninsula for other parts of Ukraine. Kapustin asked his wife, Marina, to leave for Israel until the situation stabilizes. She refused.

“I stayed to remain with my community, but I wasn’t very happy my family also stayed,” Kapustin said. “I would rather see them as far away from the action as possible, but I respect Marina’s choice.”

“We have seen the work of neo-Nazis in Ukraine,” Putin said. “They and anti-Semites are rampant in Ukraine today.”

Putin seemed to be referencing the prominent role in the Kiev protests of Svoboda, a xenophobic political party whose members have referred to Jews as “kikes.” Svoboda leader Oleh Tyahnybok has described his movement as the “worst fear of the Jewish-Russian mafia.”

The protest movement erupted in November because of the Yanukovych government’s prioritizing of ties with Moscow over relations with the European Union. But the revolution has exposed deep divisions between the country’s mostly Ukrainian-speaking west and the more Russian-oriented east and south.

“The Maidan Revolution was a dangerous thing,” said Boruch Gorin, a prominent Lubavitch rabbi in Moscow who was born in the predominantly Russian-speaking city of Odessa in southern Ukraine. “The decision to abandon democracy as a tool for change and adopt violence is always frightening, especially to minorities.”

Gorin, however, acknowledged that the protest movement was larger than just nationalist diehards and included both Jewish and non-Jewish liberals, as well as ordinary Ukrainians angered by rampant corruption and poor economic policies.

Amid the months of unrest leading up to Yanukovych’s ouster, unknown assailants staged two violent attacks on Jews in Kiev. On Jan. 17, an Orthodox Jew was stabbed after leaving a synagogue. The week before, another Orthodox Jew was beaten outside his home. Both men are expected to recover fully.

On Feb. 23, the day after Yanukovych’s ouster, a synagogue was firebombed in southeastern Ukrainian city of Zaporizhia. It sustained only minor damage.

Last week, unidentified individuals drew swastikas and wrote “Death to the Jews” on the front door of Kapustin’s Simferopol synagogue in Crimea.

Some leaders of Ukrainian Jewry, including a Kiev-based Ukrainian chief rabbi, Yaakov Dov Bleich, suggest that at least some of these incidents may have been provocations by pro-Russian forces seeking to justify Russian involvement in the crisis.

At a press conference in New York on Monday, Bleich called on Russia to withdraw from Ukraine. He drew a parallel between Russian actions in Crimea and the false pretenses Adolf Hitler used to justify his invasions and annexations of other countries in the 1930s.

But others say the threat of anti-Semitic violence is real and that Russian protection is vital for Ukrainian Jews. Baruch Fichman, founder and president of the Ukrainian League Against Anti-Semitism, based in the western Ukrainian city of Chernivtsi, said Ukrainian neo-Nazis are feeling emboldened by the revolution’s success and are more dangerous now.

Putin’s suggestions notwithstanding, Gorin says Russia’s mobilization in Ukraine is not motivated by its concern for Jews but by the new Ukrainian government’s scrapping of a law recognizing Russian as an official language. Russian intervention, he said, was an error that would mainly serve to reignite Ukrainian nationalist fervor.

“All said and done,” Gorin said, “Jews and non-Jews in Ukraine perceive Russian military intervention as a bigger threat than any revolutionary government.”