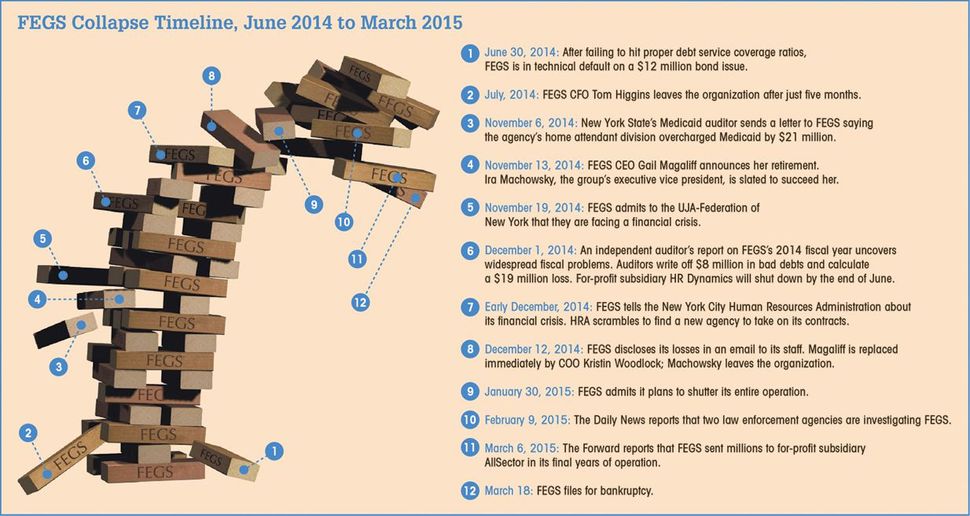 FEGS, the giant Jewish social service agency, filed for bankruptcy in the Eastern District of New York on March 18, the latest step in the months-long collapse of the massive charity.

Concurrent with the filing, FEGS announced that it would receive a $10 million loan from the UJA-Federation of New York, paid out of that charity’s general fund, to ensure continuity of service to the charity’s clients. In a letter posted on UJA’s website, CEO Eric Goldstein said that the loan was secured by FEGS properties in the Bronx and Brooklyn, among other assets.

In its filings with the court, FEGS acknowledged that its financial troubles span back years, to at least 2013, when the charity lost $5.5 million — a sum had was effectively hidden in the financials by a large one-time insurance settlement.

FEGS believes it has over 2000 creditors, and in its filings describes a complex web of bond, mortgage and lease obligations. In its statement, FEGS said it planned to continue paying wages and benefits to employees during the bankruptcy process.

“This filing represents the next step in our commitment to transfer all programs and services to appropriate parties in a way that ensures our clients experience uninterrupted care and support,” said FEGS CEO Kristin M. Woodlock, in a statement. “The employees of FEGS have seen to it that clients continue to receive the high quality service for which FEGS has been known. I want to recognize their heroism during this very difficult time.”

In an affidavit filed with the bankruptcy court, Woodlock described years of mismanagement leading up to FEGS’s collapse. Woodlock wrote that FEGS had failed to cut costs amid declining revenues, and that “operational and administrative inefficiencies…pervaded [FEGS’s] programs.” Woodlock said that flaws in the charity’s financial management system handicapped the organization, and said that an “administrative cost structure” that was “significantly more than target industry standards,” plus an overly complex organizational structure, made it difficult for the charity cut its losses.

Woodlock also blamed a “concentration on top line growth without due concern to contract viability,” which caused FEGS to enter into unprofitable contracts and to neglect to put aside funds to repay government advances and other associated contract costs.

Woodlock further blamed FEGS’s relationships with its for-profit affiliates for its losses. After for-profit affiliates like AllSector failed to attract enough clients besides FEGS, the charity was “forced to fund these affiliates’ cash requirements and losses.” The Forward reported in March that FEGS had sent increasing millions to AllSector in recent years.