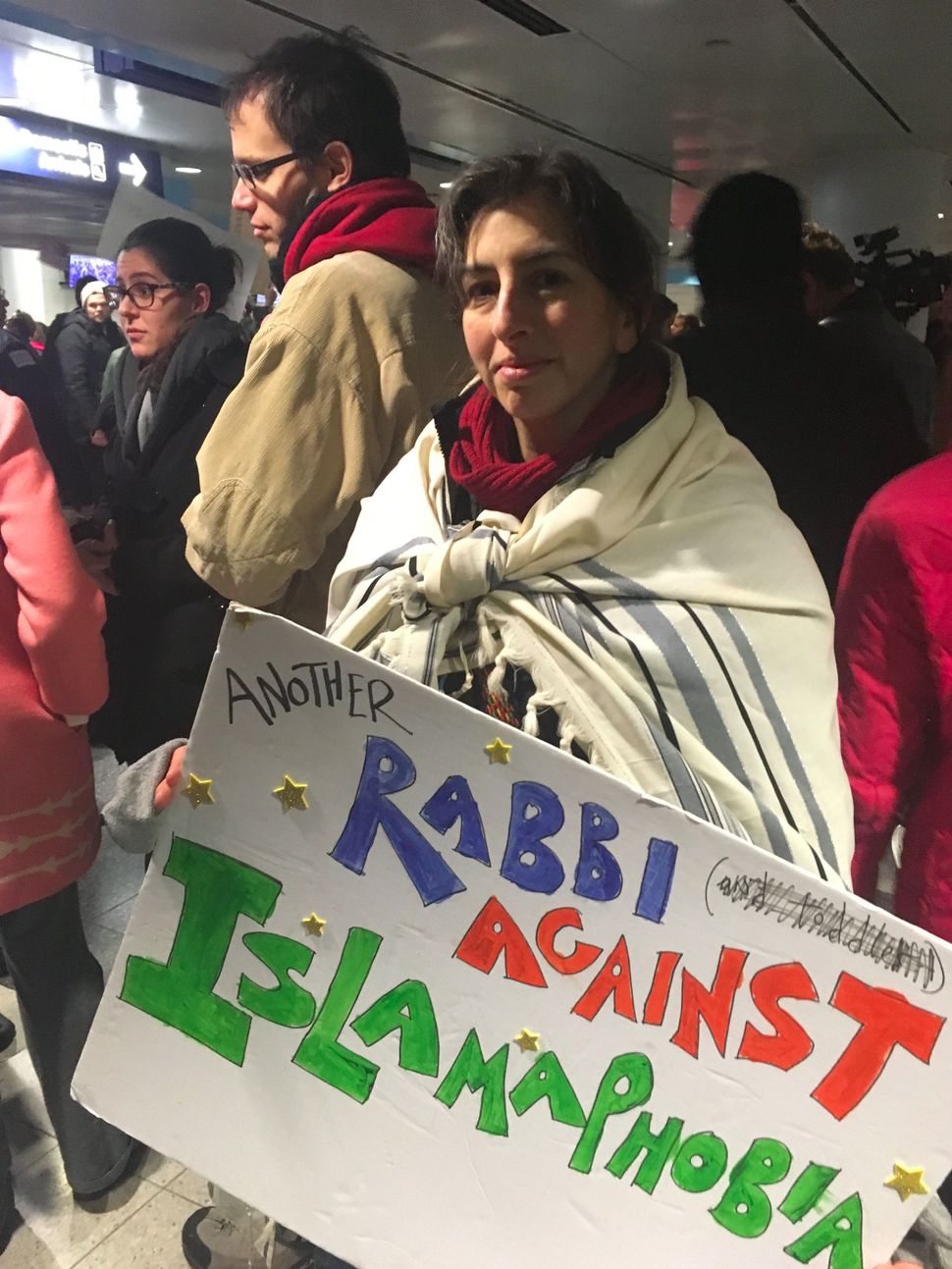 Worries have evaporated among organizers about how to follow up on the January 21 Chicago Women’s March, which drew 250,000 protesters.

Contrary to widespread concern about losing the energy that coalesced around the massive outpouring that took place in Chicago and other cities nationwide that day, said Donna Gutman, president of the North Shore chapter of the National Council of Jewish Women “We’ve been combating everything that’s raining down.”

“Now we’re full metal jacket, a full 180 degrees from the despair after the election,” she said. “We don’t have the chance to breathe between contractions. We keep pushing it out.”

Groups such as NCJW, Jewish Voice for Peace, the Sisterhood of Salaam Shalom and the Jewish Council on Urban Affairs had always planned to continue their work establishing partnerships and building coalitions with other groups outside the Jewish community. But the constant barrage of Trump executive orders and new appointees has provoked a kind of organic coming together of a diverse array of groups in opposition; people simply find themselves marching together.

“What [the march] has allowed us to do is to expand our network and meet more sisters,” said Dale Ginsburg, a member of the Sisterhood of Salaam Shalom. “We’ve been getting a lot of emails from various organizations about what to do next, and we’ve been filtering through and passing on word of what is going to be helpful. Sometimes I feel like we’re bludgeoning our friends, but no one has said ‘Stop.’”

Groups like Indivisible Chicago have sprung up to provide guidance for people who aren’t sure exactly what they should be doing. Part of an informal national movement based on a Google doc created by a group of former congressional staffers, Indivisible provides instructions for grassroots organizing. “For a long time, all we had was donate money, subscribe to a real newspaper and call your senator, and that was all anyone knew for the longest time,” said Jason Rieger, Indivisible Chicago’s organizer. “And then it started to evolve. Every day I post some actions [on Facebook and our website] you can take to guide a daily action. It’s so overwhelming, there’s so much going on, so it’s like we’re saying, ‘Let’s do this today. Don’t worry about how the world is falling apart. Do this.’”

A lot of those daily actions are quick and easy things people can do from home, like calling congress members to discuss issues such as the confirmation of various cabinet members, the fate of the Affordable Care Act, and funding for Planned Parenthood.

Trump’s January 27 executive order temporarily banning nationals of seven primarily Muslim countries and all refugees particularly galvanized Chicago’s Jewish community. When word came on Saturday afternoon that lawful permanent residents and valid visa-holders were being detained at O’Hare International Airport, State Senator Daniel Biss quickly joined a press conference and protest organized by the Arab American Action Network outside the airport’s international terminal. Biss spoke to the crowd about how his grandparents were refugees from Nazi Germany and pointed out the irony of Trump issuing the travel ban on Holocaust Remembrance Day. “We stand together, we stand united,” he said. “When people are frightened, we stand with you.”

Other Jewish officials visited the airport over the weekend, including Mayor Rahm Emanuel (who bought breakfast for the volunteer lawyers who had stationed themselves at the airport to help release stranded travelers) and Representative Jan Schakowsky.

Schakowsky also participated in two community meetings on Sunday afternoon. The first, in the Rogers Park neighborhood, was a workshop to teach immigrants about their basic rights. The second, in north suburban Morton Grove, organized by JVP, dealt with how to transform the northern suburbs into sanctuary communities. It included both Jewish and Muslim speakers.

Synagogues and clergy have also found themselves helping to organize the activists, both directly and indirectly. Several synagogues organized contingents to go down to Grant Park together for the Women’s March. Before the march, NCJW hosted a brief prayer service in the park. 200 people showed up, including 3 rabbis and a cantor. Rabbi Shoshanah Conover of Temple Sholom of Chicago was one of the speakers at the march. She spoke about the women of valor in that week’s Torah portion, Sh’mot, which tells the story of Moses’ early years, and invited everyone to stand up and say, “Hineyni,” “I am here,” for their fellow marchers.

“I feel right now what I need is to speak from a place of values and reach across difference and listen and share where I’m coming from,” she explained afterward. “I think people have been galvanized on a local level. They’ve realized they don’t have to depend on people in small rooms in faraway places. They can do things on the ground, organize their voices, power and money to build something better.”

“This past Shabbat afternoon,” said Rabbi Lizzi Heydemann, the founder and rabbi of Mishkan Chicago, “there were messages going out on Facebook, people saying, ‘Does anyone know if there’s anything to support the Muslims tonight?’ and then a few minutes later other people saying, ‘Here’s something,’ and posting the link to the protest.

“How do we organize all this diffuse and powerful energy in ways that are meaningful?” she asked.

Heydemann cited an email one of her coalition partners had send out suggesting “one thing everyone can do every day for [Trump’s] first 100 days.”

“There are convenient ways to express concern and dissent,” she said. “It remains to be seen the most consistent and meaningful ways people engage.”